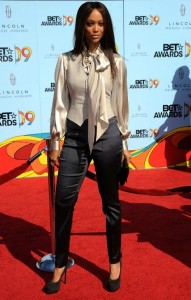 Poor Tyra Banks. Not only has she grown out of her modeling career, but she’s also gained a stalker who believes they will get married — he even left a wedding invitation in her home that stated the big day was Jan. 8, 2011. Marten Williams Jr. was arrested earlier this month for trespassing on Tyra’s property, and according to the arresting officers, Williams said he was bringing the star “offerings.” He also believes he killed George W. Bush. — no wonder the guy was placed on a 5150 psychiatric hold after his arrest. Banks recently asked for a restraining order against the man, and hopefully the judge will give it to her. A stalker is bad enough, but one who believes Michael Jackson is alive and living in Long Beach, Calif. is ultra freaky.