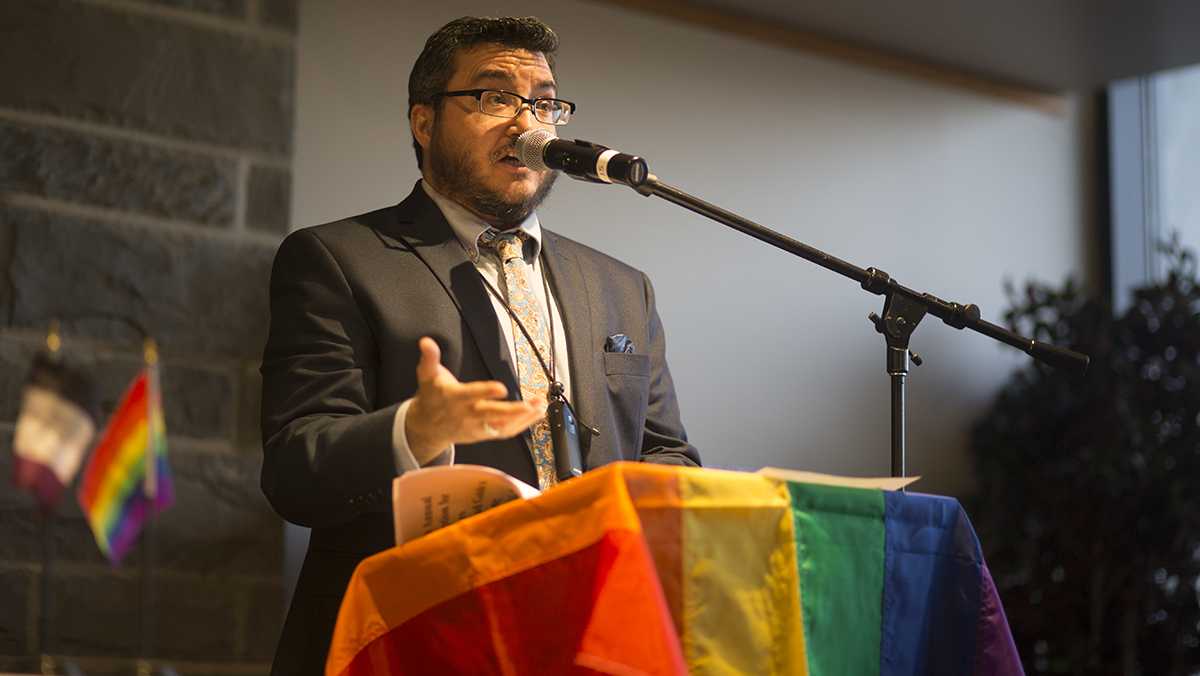 A warm aura of familial chatter radiated from the Campus Center as members of Ithaca College’s lesbian, gay, bisexual and transgender community, allies and their families gathered in Clark Lounge for appetizers and refreshments. At 7:30 p.m., the group of over 140 people transitioned across the hall into the Klingenstein Lounge to watch members of the campus community accept honors and students candidly reflect on the triumphs as well as the trials of being LGBT.

The Center for LGBT Education, Outreach and Services organized the 14th annual Rainbow Reception on April 15 — a cultural celebration that recognizes the accomplishments of lesbian, gay, transgender, queer, asexual and allied members of the graduating class as well as graduate students. Luca Maurer, the LGBT Center’s program director, said the college’s LGBT community is very diverse, though it is often hard for members to see themselves reflected in role models and in the media.

“Our celebration is a way to acknowledge the very diverse accomplishments that our students have had and to say, ‘We see you, and we hear you,’” Maurer said.

He said the history of the Rainbow Reception dates back to 1995 when Ronni Sanlo, then LGBT campus resource director for the University of Wisconsin, Milwaukee, created the Lavender Graduation.

“Ronni, in 1995, realized that LGBTQ students needed and deserved to be recognized for their achievements,” Maurer said. “She created the Lavender Graduation as an opportunity to include students in the celebratory process.”

Though there were only eight people in attendance at the first ceremony at the University of Wisconsin, Maurer said, the tradition garnered more support over the years and spread to other institutions as they celebrated their own versions of LGBT graduations.

Maurer and Elisabeth Nonas, associate professor of cinema and photography, presented three awards to campus community members that honor their achievements at the college and recognize their contributions to the LGBT community. The Harvey Milk Award for Exceptional Efforts to Raise Awareness and Visibility of LGBT Issues at the College was awarded to seniors Aaron “Vanilla” Thornton and Daniel Fogarty for their work with the student organization PRISM, an educational group where students discuss queer issues, and for organizing the 2016 Drag Show.

Thornton thanked Maurer for supporting him when he was suffering from suicidal thoughts during his sophomore year.

“I felt like a lot of the adults in my life wouldn’t listen to me, and you were always there to listen,” Thornton said.

The Sylvia Rivera Award was presented to senior Matthew Dankanich for providing outstanding service for the LGBT community on campus. Amid myriad volunteer work, Dankanich meets with prospective Ithaca College students who identify as LGBT to answer their questions about coming to college. In addition, he presented research at the Whalen Academic Symposium on self-harm and its correlation with childhood neglect and at the Eastern Psychological Association conference on aggression and its roots in childhood trauma.

“A plaque cannot possibly thank you enough for everything that you’ve done,” Maurer said to Dankanich. “I’ll give you this plaque and say what I’ve been saying to you for a long time, which is, ‘Do the next thing.’”

Dankanich said for him, the “next thing” is to work toward his master’s degree in social work.

The Appreciation Award was given to Jenny Pickett, assistant director of Residential Life, for making restroom options transparent for students when they are selecting their housing and for receiving funding from the college for an initiative to modify bathrooms to accommodate the needs of transgender and nonbinary students. Pickett was sick and not able to attend the meeting, but Maurer said she wanted to thank all the students.

After graduating seniors and a Ph.D. student crossed the stage to receive their rainbow honor cords to be worn at graduation, Maurer and Nonas left the stage empty for any student to reflect on their time at the college. Tears were shed, and intimate stories were told as students expressed gratitude to friends, family members and the LGBT community.

Senior Zachary Mota approached the stage to thank PRISM for accepting him into their community.

“I found out that there was this wonderful, queer, gay, drag community at IC,” Mota said. “Sometimes it can be hard to find the gay community, and this wonderful, fabulous little pocket has been an integral part of my time here.”

Before the formal reception dissolved into friendly chatter, Maurer told the story of his experience as an undergraduate, enduring physical and verbal bullying from his residence hall mates. When he told the residence life associate he was planning to drop out and that it wouldn’t matter to anyone if he was gone, she told him, “It matters to me.” He said he stayed to complete his four years and that he wanted to pay the message forward to the current seniors.