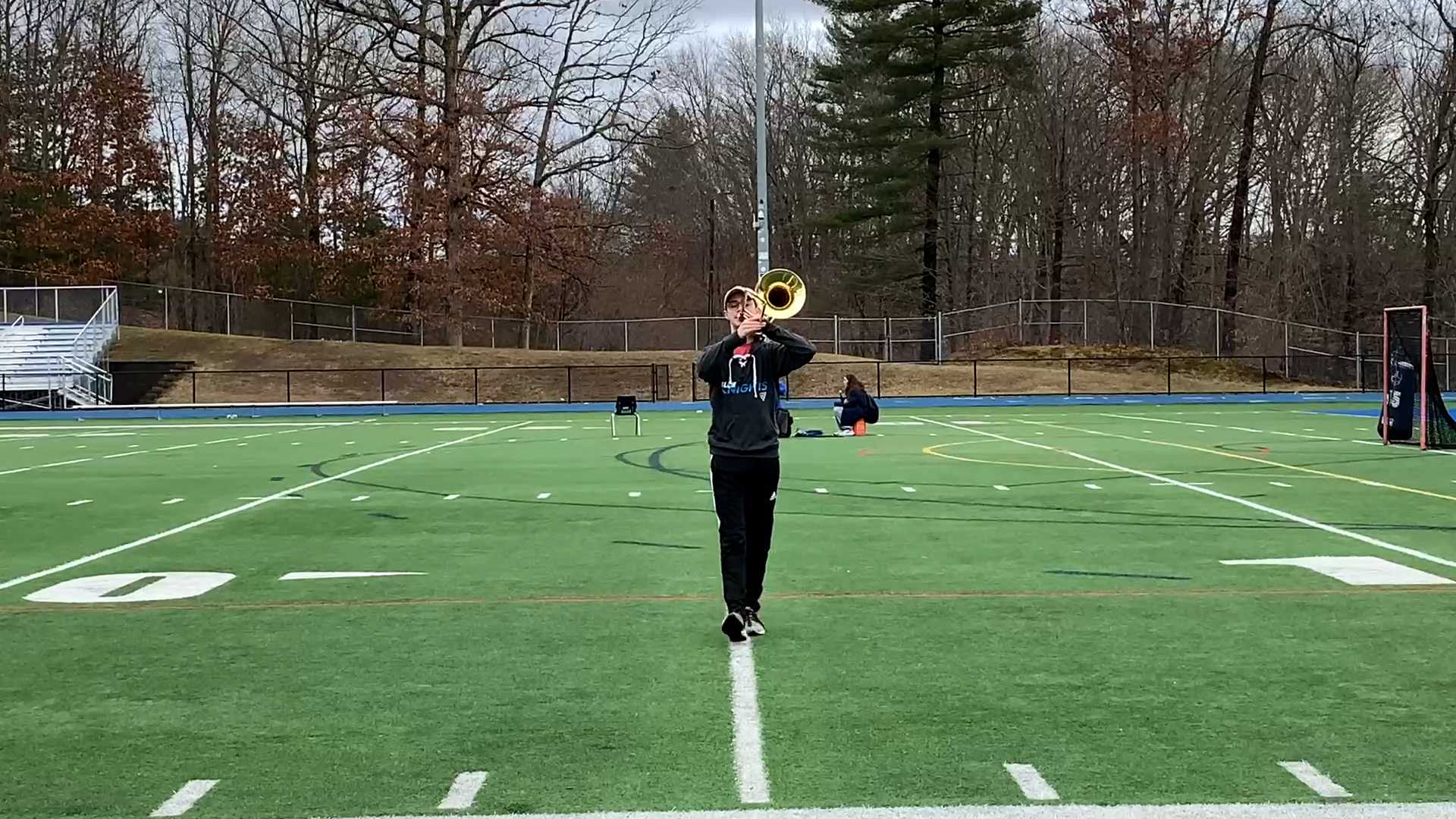 Courtesy of Timothy White
Some Ithaca College students spend hours practicing their instruments, working out and rehearsing routines so they can be in top shape for the competitive world of Drum Corps International (DCI).
By Maddy Martin — Life & Culture editor
Published: February 18, 2021

In addition to their weekly school work, some Ithaca College students spend hours practicing their instruments, working out and rehearsing routines so they can be in top shape for the competitive world of Drum Corps International (DCI).

DCI, described as “Marching Music’s Major League,” is a league of elite, competitive brass ensembles for students up to the age of 21. The DCI season runs from late June to the second week of August when performing groups and drum corps travel around the country and compete with each other. During competitions, teams perform complex marching routines that combine music with physical movement to create an auditory and visual spectacle. There are two divisions within DCI: the larger World Class and the smaller Open Class. Drum corps are independent organizations, usually not part of a scholastic institution, and have a membership limit set at 150.

DCI has no official tie to Ithaca College, but Alexander Shuhan, professor in the Department of Music Performance, said he has had several students participate in DCI in the past.

Sophomore Justin Lordi, a marching baritone player for the Cadets Drum and Bugle Corps, a World Class drum corps, said he was first exposed to drum corps in 2018 when his high school band director showed him a video of a drum corps performance. Shortly after, Lordi said he begged his parents to bring him to his first drum corps show.

“The sound was insane,” Lordi said. “The presence of everyone in the corps and the brass hitting in phases, it was a sound I’d never heard before, and I was like, ‘I want to do that, that would be amazing.”

When he was 16, sophomore Isaac Schneider, a euphonium player for the Spartans Drum and Bugle Corps, an Open Class drum corps, said he saw a drum corps show in Chicago and became obsessed with it.

“I was immediately like, ‘This is something I have to do,’” Schneider said. “When I became a junior in high school I started deciding, ‘I’m going to major in music education and go all into this music thing.’ That’s when I decided I was going to start seriously looking into drum corps.”

Sophomore Timothy White, a euphonium player for the Blue Knights Drum and Bugle Corps, a World Class drum corp, said he had wanted to do drum corps since he was a kid because his older brother was a member of the Hurricanes Drum and Bugle Corps, a drum corps that is part of the Drum Corps Associates (DCA). DCA is a separate league from DCI that allows members of all ages. While he was in high school, White joined the Hurricanes himself.

“When I was going through really tough times in my life, it gave me a family,” White said. “The DCA guys were already attuned to my family because of my brother so joining them with big open arms was really nice.”

Schneider said he auditioned for the Phantom Regiment Drum and Bugle Corps during his senior year of high school without expectation of getting in so he could have the experience of auditioning.

Schneider didn’t make the Phantom Regiment but later auditioned with Shadow Drum and Bugle Corps. Schneider said he got a contract but wasn’t in the financial situation with entering his first year of college to pay the corps fees. During November and December of 2019, Schneider auditioned for the Spartans and made it in.

“I signed the contract and accepted my spot, and that was when it really started, but then COVID kind of ruined it,” Schneider said.

When the COVID-19 pandemic hit in March 2020, the DCI 2020 season was canceled. Despite having just joined their respected corps a few months before, Schneider, Lordi and White were left practicing with their respective corps members over Zoom.

Lordi said the Cadets have continued to hold virtual rehearsals on Zoom where each member plays one at a time because Zoom couldn’t handle the sound of them all playing at once. The corps sent out dance routines for members to perform on their own, Lordi said, and post videos of in a Facebook group. Lordi said he was left practicing wherever he could.

“I would just find a space that I had enough room in and went, ‘Alright I’ll do it here,’” Lordi said. “Sometimes I would do it in the basement of my parents’ house. Here on campus, I would find a really big practice room in the School of Music and do the visual stuff there.”

Despite not having the chance to compete yet and only communicating with their corps members online, Lordi, White, and Schneider said there is a strong sense of community within their drum corps.

“At the core of [drum corps] it is about being a family first, and through this family, uplifting people to be disciplined, productive community members who can communicate beyond music and be outstanding individuals,” Schneider said. “There’s this musical and performative aspect that’s really competitive, but the culture extends to … building a community and family of people that can be taken into the real world.”