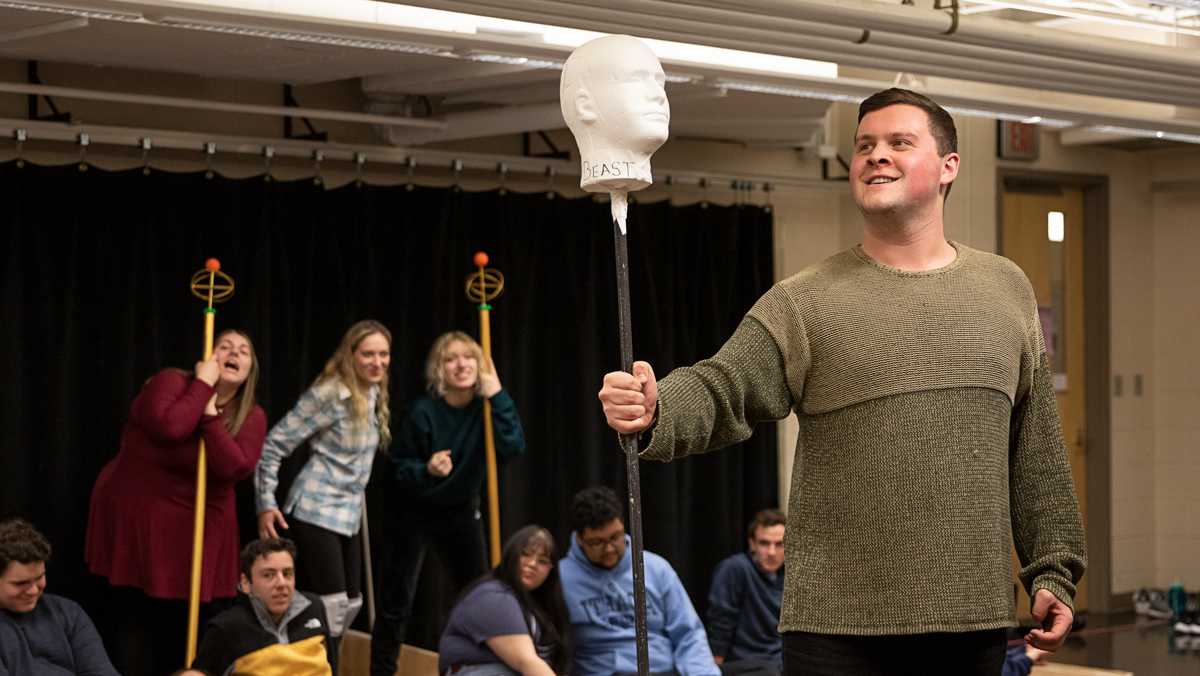 Emily Silver/The Ithacan
Andrew Sprague ‘20 rehearses for the opera “Dido and Aeneas” with the rest of the cast Jan. 25, 2020. Rehearsals for shows this spring are held on Zoom or socially distanced with actors in masks.
By Connor Ahern — Staff Writer
Published: March 3, 2021

After being away from the Ithaca College stage for a year, singers, actors, dramaturgs, directors and set designers are preparing for the Spring 2021 season through Zoom and socially-distanced rehearsals.

The Department of Theatre Arts will be showing four productions during Spring 2021. Sophomores Clari Atherlay and Aaron Hutchens said “The Trojan Women” will premiere in March, and “Head Over Heels,” “The Magic Flute” and “Stop Kiss” will premiere in April. They said there will be free Zoom screenings of many of the shows, though some are still awaiting confirmation.

Senior Logan Geddes, an actor in “Head Over Heels,” and junior William DeVary, an actor in “The Trojan Women” said it has been a challenge to adapt, but they have been working hard with their castmates. Each show will be performed in front of approximately 50 people in theaters that normally seat 400. Atherlay said the audience will be selected from students and staff but will mostly be people who worked on the show.

Originally written by Jeff Whitty and James Magruder, “Head Over Heels” features hit songs from the 1980s rock band The Go-Go’s. The production is a jukebox musical comedy set in the fictional kingdom of Arcadia, where a royal family receives a prophecy of doom from an oracle. Determined to prevent its fate, the family sets out on an adventure to save the kingdom.

Geddes takes on the role of Musidorus, a shepherd who assumes the persona of a woman to pursue the princess he is secretly in love with. Geddes said the experience helps Musidorus explore his identity in unexpected ways. 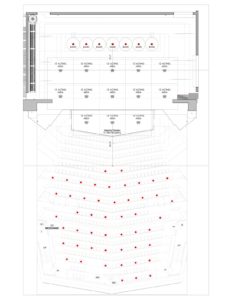 The socially distant seating arrangement for “Head Over Heels.”

Working with the cast is senior Rico Froehlich, production stage manager for the show. Froehlich said that putting the show together has been difficult on the technical side due to the spacing of the stage and other set complications that come with COVID-19 restrictions. He said he likes how “Head Over Heels” tackles the complex themes of identity and sexuality it presents in humorous ways.

“This is such a fun and modern musical that really touches on subjects of identity and gender and social structure and … does that all to the music of the Go-Go’s,” Froehlich said. “So you’re rocking out, and you’re enjoying this comedy.”

“Head Over Heels” will be performed in person to limited college personnel at 8 p.m. April 2 and 11 a.m. April 4 in the Hoerner Theatre. It will also be made available online to the public via Zoom on a date in April that has not yet been announced.

Ellen McLaughlin’s “The Trojan Women” is an adaptation of the classic Greek tragedy. Enduring death and bloodshed, the women of Troy watch as their sons and husbands battle in a war that ravages their homes.

DeVary, who plays Talthybius, said the play investigates what life means when the women in it exist in such a desolate state. The play follows the women through human trafficking, abuse and the commodification of their bodies.

“[The play] wouldn’t have survived two and a half thousand years if it wasn’t [important],” DeVary said. “I think it speaks fundamentally and profoundly on this moment that we’re in right now and sheds light on aspects of our
lives and aspects of the world that, for many of us, are very easy to ignore. And this play … makes you very, very genuinely ask, ‘What can I do? How can I act as an agent of change in this world?’”

Performers and crew must all adhere to COVID-19 guidelines to be able to perform in front of an audience safely. DeVary said everyone working on the production has been supportive and understanding of each other while working under the new guidelines.

“[The restrictions] offered a lot of really interesting and unique opportunities for experimentation, exploration and staging because for the majority of the show we have to stay 12 feet apart in order to maintain the safety of everyone,” DeVary said. “I take this pandemic very seriously, so I’m always double–masking with my face shield, my little box of Lysol wipes that I go and wipe everything down with.”

Sophomore Melina Cicigline, promotions and publicity manager, said “The Trojan Women” will be performed in person to limited college personnel at 8 p.m. March 5 and 11 a.m. March 7 in the Clark Theatre. It will also be made available online to the public March 20 via Zoom.

Originally written by Diana Son, “Stop Kiss” tells a tale of the unexpected love that is found between Callie, a savvy yet misguided New York City traffic reporter, and Sara, a newcomer to the area. However, the couple’s love story comes to a screeching halt when they become victims of a hate crime, and their lives transform in ways they could have never imagined. 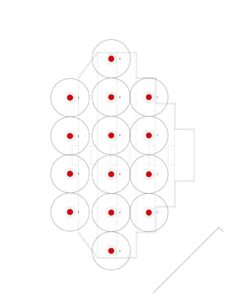 The socially distant seating arrangement for “The Trojan Women” and “Stop Kiss.”

Paula Murray Cole, associate professor in the Department of Theatre Arts, will be directing “Stop Kiss” and said the rehearsals begin March 22.

Cole said the cast will be challenged to convey an intimate story of Callie and Sara with the additional challenges of social distancing and masks.

“Ultimately, I believe this is a story about daring to love, facing up to change and personal challenge, finding our resilience and making a commitment to one another — what can matter most to the shape and quality of our lives — then and now,” Cole said.

“Stop Kiss” will be performed in person to limited college personnel at 8 p.m. April 16 and 11 a.m. April 18 in the Clark Theatre. It will also be made available online to the public via Zoom on a date in April that has not yet been announced.

Mozart’s fairy–tale opera, directed by Ellen Jackson, lecturer in the Department of Music Performance, with musical director Christopher Zemliauskas, assistant professor in the Department of Music Performance, tells the story of the young Prince Tamino, who embarks on an adventure to save Princess Pamina. The pair meet obstacles along the way as they undergo a series of trials to reveal the true villain.

The production stage manager, senior Chris Griswold, said Jackson has taken this opportunity to completely rework the piece to be set in the modern Midwestern United States.

“It’s given [Jackson] and the performers the opportunity to tell the story of how modern America uses, uses up and then spits out women and turns them into something that is used to lure and to produce and then isn’t valued anymore beyond that,” Griswold 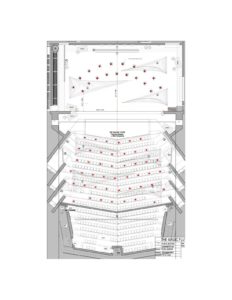 The socially distant seating arrangement for “The Magic Flute.”

Griswold said this production is going to be unlike any other that the department has put on before. The set, lights and costumes will be simplistic and minimal. Due to COVID-19 guidelines, the orchestral accompa

niment, singing and dialogue will be pre-recorded. The recorded audio will play while masked performers act out the opera on stage.

“There’s still going to be something missing,” Griswold said. “There’s not going to be hundreds of people in an audience coming together for two hours to watch people perform something completely live on stage. That’s not something that we’re going to have for a long time.”

“The Magic Flute” will be performed in person to limited college personnel at 8 p.m. April 30 and 11 a.m. May 2 in the Hoerner Theatre. It will also be made available online to the public via Zoom on May 15.