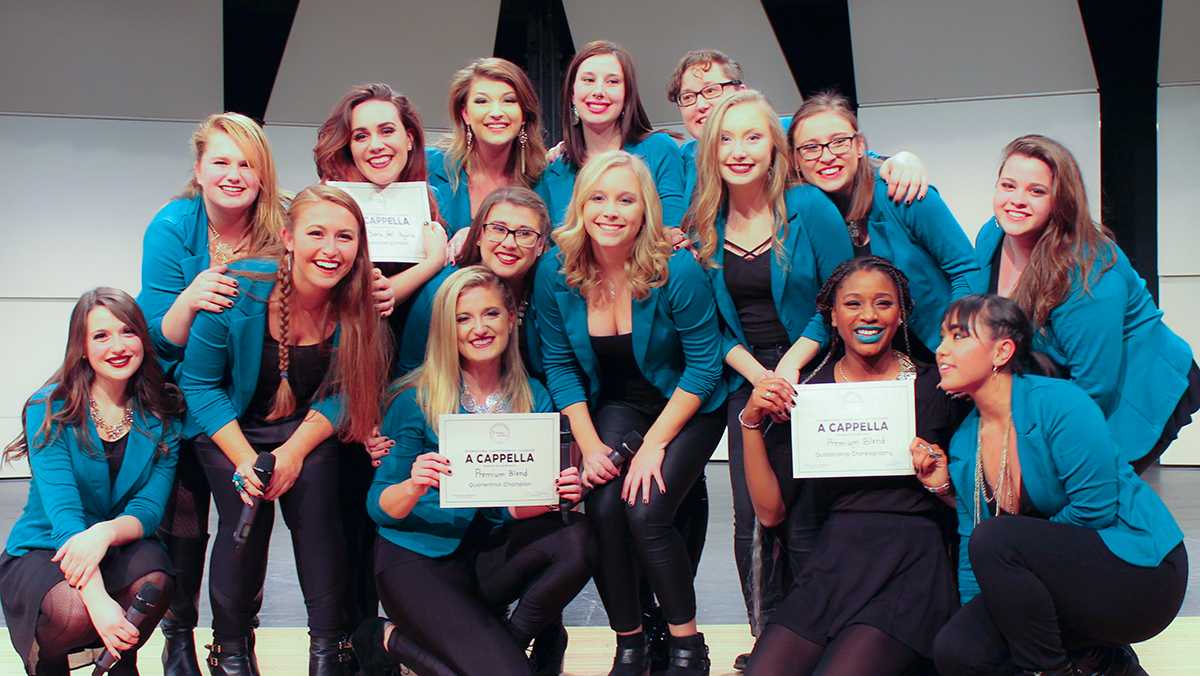 Courtesy of Emma Morris Downey
The members of Premium Blend following their first place finish at the International Collegiate Championship of A Cappella Quarterfinal competition on Feb. 6. In addition to first place, the group also won best choreography and best soloist, and will move onto the semifinals.
By Justin Henry — Contributing Writer
Published: February 10, 2016

The nights before the International Championship of Collegiate A Cappella quarterfinals, Feb. 4 and 5, Ithaca College’s three premier a cappella groups — IC Voicestream, Ithacappella and Premium Blend — could all be found in the James J. Whalen Center for Music, room 3304, performing their set lists for each other. After each performance, the other two groups gave reverent praise and constructive criticism in preparation for the following night’s competition.

“Thank you for letting us be enraptured by your vulnerability,” said Ithacappella president and senior Dan Purcell, speaking to the three Premium Blend soloists.

Allison Dethmers, president of Premium Blend and senior, said among the Ithaca groups, it isn’t as much about competition as it is about representing the college.

“We’re excited, as all three a cappella groups are, to show what Ithaca College is made of,” Dethmers said. “We’ve all come together this week in the heat of everything, being like, ‘Oh my God, let’s watch each other. Let’s support each other.’”

On Feb. 6, Premium Blend, the college’s first and only female a cappella group, won first place in the ICCA Central quarterfinals, advancing them to the regional semifinal April 2 at the Mainstage Theatre at the University at Buffalo. In addition, the group brought home two more awards.

Before the night of the quarterfinals, Dethmers said this competition offered a chance for Premium Blend to make its mark as an a cappella group. She said after more than four years of not being on the ICCA stage, it was time to make a comeback.

“We’re very focused on ourselves right now,” Dethmers said. “We’re really excited to burst out of the background. We’re just excited to show everyone what we’re made of.”

Namarah McCall, senior and host of the competition, said the evening was at once a competition and a celebration of song.

“There’s automatically going to be that competitive element,” McCall said. “It’s really just celebrating and enjoying our time together with people who all enjoy the same thing, which is a cappella music.”

IC Voicestream, Ithaca College’s premier coed a cappella group, began the night with “Why iii Love the Moon” by Phony Ppl, “Arrival in Nara” by alt-j and “No Lie” by Wet.

Fresh off its winter tour, Ithacappella, the college’s premier all-male a cappella group, followed with a mashup of “Murder” by Justin Timberlake, “Left Hand Free” by alt-J, “The Blower’s Daughter” by Damien Rice, “Electric Love” by Borns and “You’re Nobody ’Til Somebody Loves You” by James Arthur.

Purcell said the format of Ithacappella’s performance was inspired by the Broadway musical “Hamilton” and mixes in lines from its song “History Has Its Eyes on You.”

Concluding the evening, Premium Blend performed its song set, which included the introduction to “Past Lives” by Borns, “Sinner Like You” by Parson James, “Half The Man” by Rozzi Crane and “In Your Atmosphere” by John Mayer.

Dethmers said there is a story of love and loss to be told in its song set and that each song represents a cycle in a relationship.

At the end of the night, Premium Blend claimed three of the seven awards: best choreography, best soloist for junior Sara del Aguila and first place in the competition overall.

“That’s the best I’ve ever heard them sing,” Ethan Fletcher, president of IC Voicestream and senior, said of Premium Blend. “Their set was designed to go at the end of something.”

Purcell said since his freshman year, it has been a dream of his to see a cappella groups on the same playing field.

“If there’s any legacy the seniors can leave behind, it’s that we can all be great,” Purcell said.

In the upcoming months, Premium Blend will sing the national anthem at a Ranger’s and a New York Knick’s game. The group plans on filming its own music videos by utilizing its resources in the Roy H. Park School of Communications. In March, IC Voicestream, Ithacappella and Premium Blend will be performing in their block concerts, in which they will invite three other groups from the ICCA competition to perform their competitive song lists.

“It honestly felt like a Disney Channel movie,” Dethmers said of the moment the ICCA director David Rabizadeh called her group’s name. “It’s the fact of how confident we were in our set that made me feel so confident in our winning. I think it’s about the group having that one idea together and as a group. I think we did such a good job of all being on the same page and being so supportive of each other.”