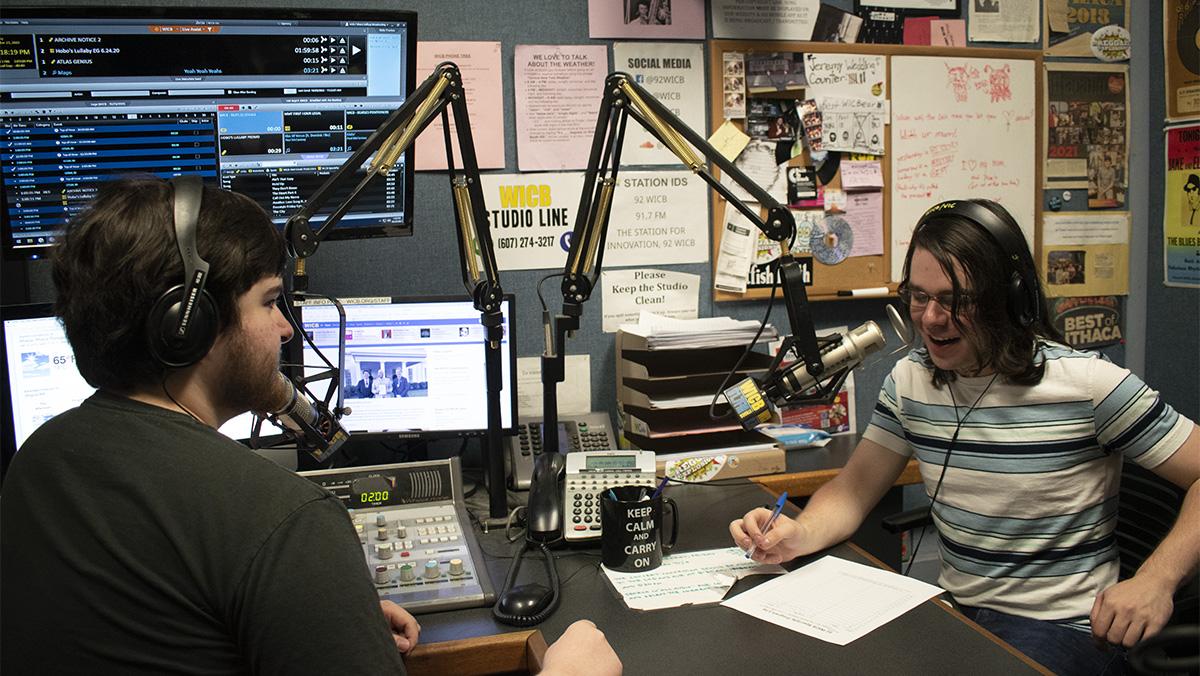 Elijah Cedeño/The Ithacan
From left, junior Chris Bendig and senior Ben Macarell host the current rendition of the "Breakfast with the Beatles" radio show, which has been on since 1980.
By Elizabeth Kharabadze — Co Life and Culture Editor
Published: November 16, 2022

Turn on the radio to 91.7 FM on any given Sunday from noon to 2 p.m. to hear the familiar tunes of the Beatles, a tradition hosted for over 40 years at Ithaca College.

“Breakfast with the Beatles” is a programming segment on radio stations across the country, which typically features one hour or more of non-stop Beatles content. Content ranges from music by the Beatles themselves, the artist’s solo works, cover songs, close Beatles associates like Yoko Ono and children of the members of the band, as well as any news, history and trivia.

While the program has a long history, its origins are debated. An early version of the program ran on WIOQ in Philadelphia from 1976 to 1989 before the concept took off nationally. However, “Breakfast with the Beatles” on WICB at the college has a claim to be the longest continuously-running “Breakfast with the Beatles” program in the nation — running as early as 1980. Currently, KLOS 95.5 in Los Angeles, California, claims to be the longest-running program since 1983.

Mike Sauter ’88 and Jeremy Menard, manager of television and radio operations, are working together to document the show’s history. Sauter, who hosted the show on WICB from 1986 to 1988, said he got the idea to look into the show’s history while on a trip to Ithaca with friends during Summer 2022. It was then that Sauter said he met Menard, who encouraged him to research the show’s history.

To collect information, Sauter said he sent out a Google form to previous and current hosts of the Ithaca College show in order to get a sense of what their time working on the show was like and their relationship with the Beatles’ work. While there are no plans to publish the findings anywhere yet, Sauter said most of the work is getting the word out there and reconnecting with different generations of hosts.

“There were a couple of people, obviously, who hosted around the time that I was a student, but most of these folks … I didn’t know anything about,” Sauter said. “ And so everybody was very excited to talk to me about it because of the fond memories that they had of the show. It definitely brought a smile to my face when I would find somebody who was another host of the show and was able to communicate with, either [though] social media [or] email just to hear other people’s stories.”

Despite forming in 1960, the Beatles remain one of the most popular rock bands in the world after over 60 years in the limelight. As of August 2022, the band has made more than 183 million worldwide unit sales, according to Statista. Aside from their hold on the music industry, the Beatles have also served as the inspiration for many mainstream fashion trends — giving rise to trendy, shaggy haircuts, Cuban-heeled boots and psychedelic-looking mustaches and beards.

“The Beatles really changed so much in music, culture, fashion, art and design to a certain extent,” Sauter said. “I mean, there’s a lot that The Beatles were involved with and influenced back in the ’60s. But they’ve loomed large over so many different generations. … There’s always something that comes along that sweeps up a new generation of people that discover the Beatles. … [There are] a lot of great entry points for people and there always seems to be something that people stumble across and discover for the first time.”

Even in 2022, Menard said the students were just as passionate about the Beatles as they were 40 years ago.

“You can hear when [students] broadcast on Sundays how much they adore the music of the Beatles, and John [Lennon], Paul [McCartney], George [Harrison] and Ringo [Starr],” Menard said. “It’s very, very special to them. And I think that also makes the broadcast special because a listener can hear that — how much passion they have for it.”

Junior Chris Bendig is one of two co-hosts on the show who has been hosting the program since Spring 2022. Bendig said he was initially interested in working on “Breakfast with the Beatles” because of his love for the band, despite how competitive it is to host the show because of its popularity.

“As a history major, I think the documentation of the story just in general is a worthwhile endeavor,” Bendig said. “It could be on the record on the macro or the micro scale, you know, and specifically even when it comes to a show like this, I think that the documentation industry is definitely [a] very important thing, I think, sort of needs to be preserved as best as possible.”

While Bendig said he is not directly involved in the documentation process, he said he contributed a little by filling out the form that Sauter had sent out.

“When you learn about their history, it’s a very rich history, not just the history of the band, but the periods right before and after they were together,” Bendig said. “So being able to explore that piece by piece throughout the meet through the medium of a radio show, I think is a really unique experience.”

Aside from Bendig, senior Ben Macarell has been working on “Breakfast with the Beatles” since Spring 2021. Macarell said he became interested in the Beatles during his senior year of high school, which he said contributed to his excitement to work on the show.

“But for every generation, there is something to take out of [the Beatles], especially with the ’90s wave of Britpop,” Macarell said. “There was a nostalgia from the ’60s feeding into that and now there’s a new nostalgia cycle with the new expanded releases of stuff and [the] ‘Get Back’ documentary and even that romantic comedy ‘Yesterday.’ There’s always something to come back to.”

Especially in light of the comings and goings of radio hosts as students graduate, Menard said it was increasingly important to document as much of the show’s history as possible.

“To have a radio show that’s been on the air for 40 plus years — that doesn’t happen,” Menard said. “It’s really special … especially when you think about college radio when you have people graduating every four years when you have just the kind of turnover that you see in student media to have the exact same program for 40 plus years, continuously every Sunday. I think that’s remarkable.”