Alum returns to create a connection with chorus ensemble 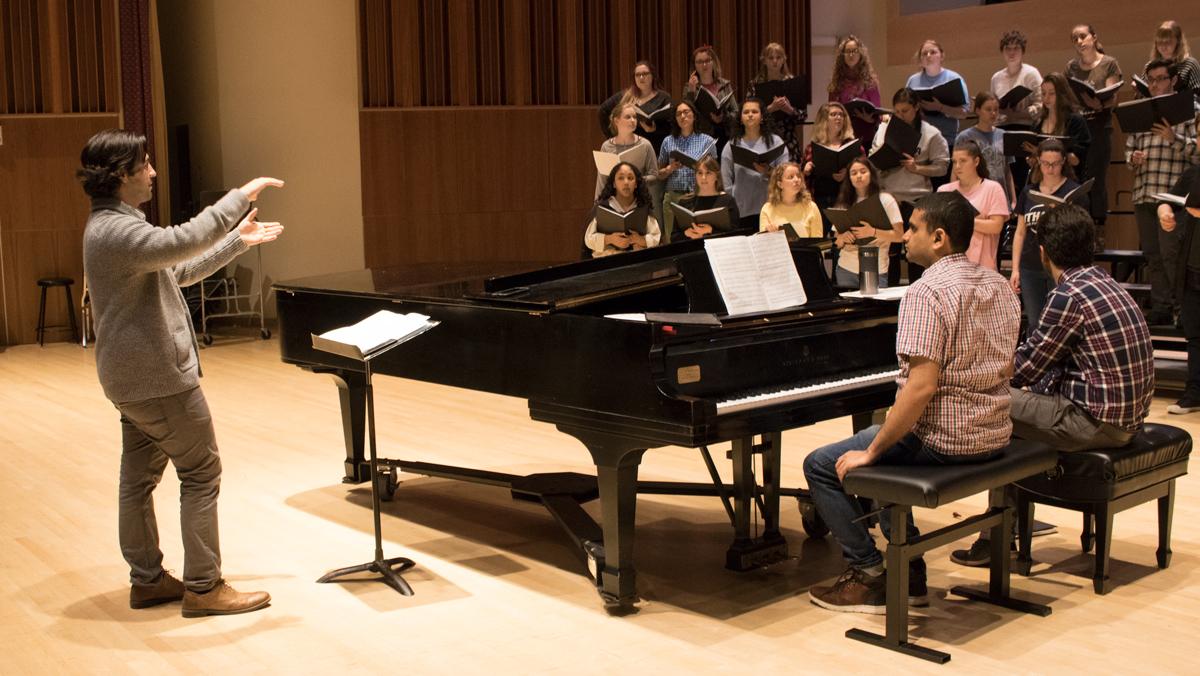 One week before its recital, the Ithaca College Campus Choral Ensemble got to step on the stage in Ford Hall and work on its piece, “How to Survive Vesuvius.” This time, it had the opportunity to work with the composer that wrote the piece, Matthew Recio ’13.

The Campus Choral Ensemble’s recital was held April 24 for an audience of approximately 50 students, parents and faculty members. The group performed “How to Survive Vesuvius” and five other songs.

Susan Avery, associate professor in the Department of Music Education, is the conductor of the Campus Choral Ensemble, which consists of a mix of students from every school on campus. It meets Tuesday nights for two hours and performs a concert toward the end of each semester.

In the winter of 2016, Avery attended a music conference in Boston and saw some of her former students. She had the idea to use Recio’s piece after hearing it in person.

“We attended a presentation where Recio was presenting a piece that he wrote,” Avery said. “It was one of the finalists for an award, so I absolutely trooped along with them, sat in the front row and was absolutely blown away.”

Avery said she was impressed by Recio’s piece and immediately thought of using it with the chorus. Recio provided the chorus with the piece before it was published in print. Avery asked him to come to one of the rehearsals and help the students learn the piece in the way he would like to see it performed. 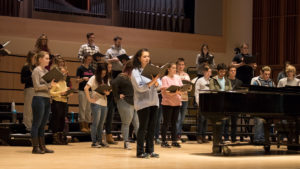 The Ithaca College Campus Choral Ensemble meets every Tuesday for two hours to rehearse for its concert at the end of the semester. (Caroline Brophy/ The Ithacan)

“It’s a definite source of pride that this piece, which has already won a ton of awards, is being worked on at home,” Avery said.

After Recio graduated with degrees in music education and composition, he continued to work toward his master’s degree at Indiana University. During this time, he wrote “How to Survive Vesuvius,” which paints a scene of a family eating an ordinary dinner while the eruption of Pompeii slowly yet dramatically approaches.

“The thought of someone doing a mundane activity and everything is spiraling around them into chaos is a really powerful concept,” Recio said.

Recio began to enter the piece in competitions, and it started to become popular and win awards. In 2016, Recio won first place in the NOTUS Student Composition Contest at Indiana University for his piece.

“I had no idea it was going to pick up, but it went on to win many prizes and awards,” Recio said. “So I’m really thankful that it’s had the traction that it’s had.”

Avery said that she only had Recio in class as a freshman but that she remembers him fondly from class.

“I always remembered Matt as a student, so when I heard this piece, it was one of those leaps into the future of pride,” Avery said. “He started here as a student at Ithaca College, and now he’s an award winner in composition.”

Junior Madison Chlebowski said she was excited to be working with Recio since the campus chorus had been practicing his piece all semester. 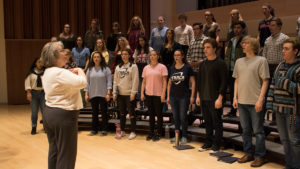 Susan Avery, associate professor in the Department of Music Education, is the conductor of the Campus Choral Ensemble, worked with her students and Recio to rehearse “How to Survive Vesuvius.” (Caroline Brophy/ The Ithacan)

“It shows how cool Ithaca is that their students still want to be involved so far after they graduate and how they’re so willing to help us,” Chlebowski said.

Chlebowski, a biology major, said many students are thankful to be working on such a grand-scale piece with the campus chorus despite not being in the School of Music.

“I have always appreciated music and singing for fun,” Chlebowski said. “I thought campus chorus was a great way to do that with people that are in it for similar reasons. It’s a nice break from hard science all of the time. It’s a new type of challenge.”

Ethan Beloin, sophomore public and community health major, said that joining the campus chorus was a great opportunity to be more active with singing and that he was excited to begin working with Recio.

“I’m a music minor, and I wanted to do something more outside of the classroom, so I joined the campus chorus to sing a bit more,” Beloin said. “It’s definitely cool that someone who made a life out of music is coming back here to work with us.”

Recio said he was happy to see the students he worked with understand the meaning of his song.

“My whole mission is that I want to write something that is my own artistic voice, but it’s also something you might not have heard before, and it’s something that the singers and the audience can feel,” Recio said. “At the end of the day, I want to create a picture and that you can see what I am writing and truly experience it.”