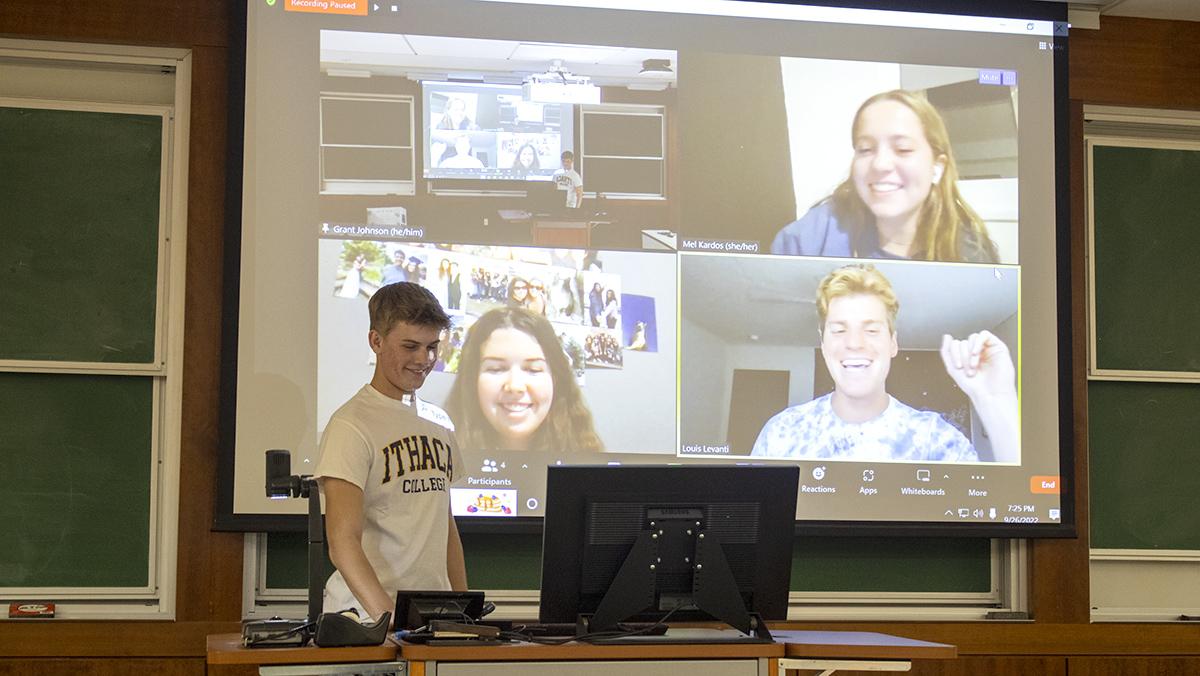 Ithaca College alum Louis Levanti ’19, a comedy and entertainment content creator, gave insight to attendees at the first New York Film and Television Student Alliance (NYFTSA) event for the fall semester, where he shared what it takes to make your content career flourish to the next level.

NYFTSA is a New York-wide organization with an Ithaca College chapter that provides opportunities for students pursuing a career in the entertainment industry, with biweekly meetings on Mondays and Wednesdays bringing in guest speakers to share their expertise. The event, held Sept. 26 at 7 p.m., was available for all students. With over 40 attendees, students gathered in-person in the Dorothy D. and Roy H. Park Center for Business and Sustainable Enterprise while Levanti joined via Zoom.

While pursuing his undergraduate degree in television-radio, Levanti said he mainly focused on live productions like ICTV during his time at the college. He interned at “Live with Kelly and Ryan” as a production intern and at “Good Morning America” as a booking intern.

The social media sensation has accumulated over three million followers across all his social media panels, such as TikTok, Instagram and Youtube. As stated in his bio on TikTok, he refers to himself as “your brutally honest internet best friend.”

“It was miserable for me. … If you like talking to people about traumatic stories, you might like it,” Levanti said. “I leaned into the more pop culture side of it where it was like, let’s eat stuff on camera.”

Levanti is now working at Paramount for AwesomenessTV as a social producer, along with creating content on his personal social media platforms, which he started during the COVID-19 pandemic.

“I blew up overnight,” Levanti said. “I refused to stop and I kept posting videos, and from there I’ve grown my social platforms. … That is actually how I got my current job, because they reached out to me through TikTok and were like, ‘Hey, we love your stuff and would love for you to be a social producer for AwesomenessTV if you ever heard of it.’”

Levanti is planning to host a show solely for TikTok and Youtube called “Bed of Lies.” He will be taking famous influencers and putting them on a lie detector test while they are lying next to him in bed.

Levanti said he was able to gain valuable insight from his internships on the reality of working in social media.

“I think a lot of what I did with interning [for] a lot of companies — I got to see the back end of everything,” Levanti said. “If you guys know, you see that there are a lot of influencers or content creators that are out of touch and don’t really know what goes into these larger projects. … A thing that I learned going to Ithaca was being able to experience social media, digital and the process of creating an idea and turning it into production.”

Levanti said he was influenced by professors during his time at the college, like Steve Gordon, associate professor in the Department of Media Arts, Sciences and Studies. He said that is where he began making his now popular content.

“He taught the class how to take a piece of content, and if you were developing something for a different type of platform, how could you turn that into a series,” Levanti said.

Sophomore Grant Johnson, co-president of NYFTSA, asked why Levanti did not like to use the term influencer. Levanti said the term can put content creators in a box of only selling the product and content to their audience.

“I like [the term] ‘content creators’ because I am not selling stuff every day,” Levanti said. “I essentially push my brand, but when you are making content, you’re doing it because you are having fun, have a really creative idea and think other people will be entertained.”

Johnson said that Chrissy Guest, associate professor in the Department of Media Arts, Sciences and Studies and advisor for NYFTSA, was the one who introduced Levanti to the group. Grant said using Levanti would draw in a wide range because he relates to the generation of students at campus.

“I think that it is so cool that he can be transparent with people, because most creators are going to hide what they make,” Johnson said. “He doesn’t gatekeep things because that’s how we can all learn.”

Levanti said he uses tactics like recreating everyday knowledge to grasp the audience’s attention; one way is through resharing his old content and making them go viral again.

Levanti also gave advice to the audience on breaking into and surviving the social media industry post-graduation.

“The industry will always be there at the time you want to get into it,” Levanti said. “I personally was a workhorse and was striving to look for internships. If I take a break, I know myself, I am going to be lazy and push it off. That is not who I am.”

Levanti was applying for jobs while he was a senior studying abroad in LA and went from there. He said that students know themselves the best and have to stick to their work ethic in order to be successful in the industry.

Sophomore Paige Morrissey, assistant treasurer of NYFTSA, said she learned a bunch from Levanti’s presentation and felt he was very knowledgeable about social media and working in TV.

“To talk about what he learned from [college] and how he transitioned to working on ‘Good Morning America’ and now producing social media content for AwesomenessTV was just so surreal,” Morrissey said.

Victoria Kellogg can be reached at vkellogg@ithaca.edu