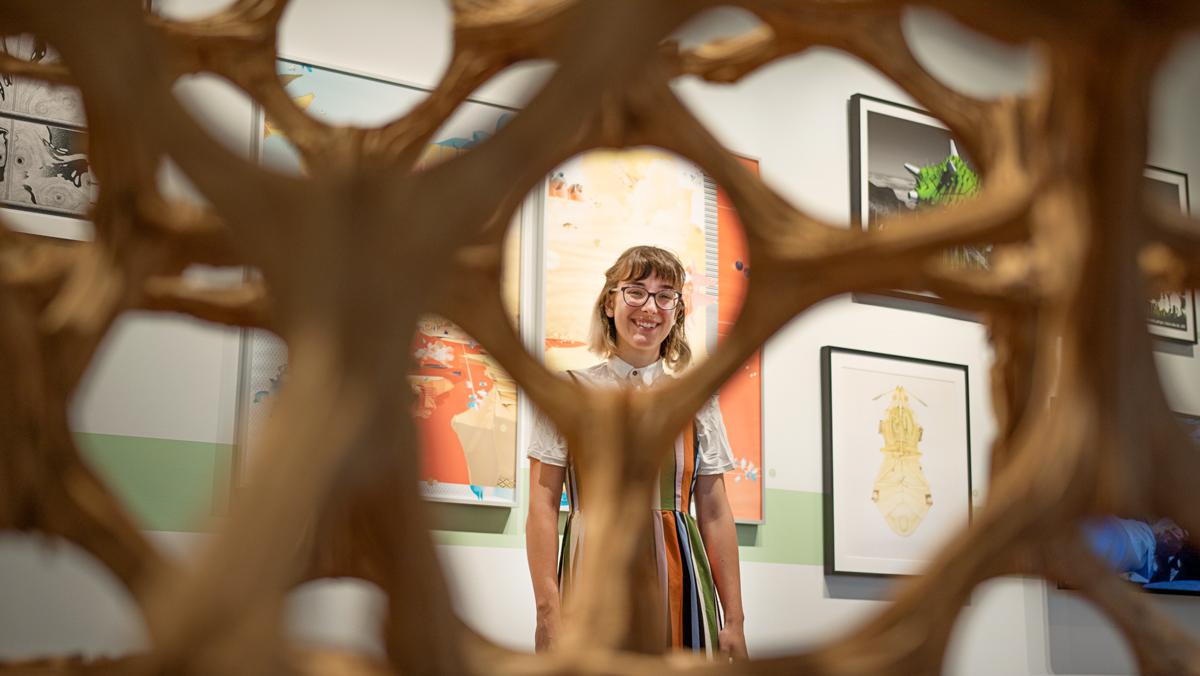 As an undergraduate, Anna Gardner ’19 worked at Ithaca College’s Handwerker Gallery. In May, she was given the position of interim gallery manager, a temporary position she will hold for Fall 2019.

“It’s funny to be working here now in this capacity,” Gardner said. “Some of the people … were just my peers last semester — now I’m their supervisor.”

The Handwerker Gallery, a small art space in the Gannett Center, is a place for Ithaca College students to learn about creative work through exhibitions, class visits and lectures. Students can work at the gallery as interns, gallery monitors or assistants. Gardner, who doubled majored in film, photography and visual art, and art history, worked as a gallery monitor. She said her previous experience eased the shift from her past position to her current one. In her later years at the college, Gardner said she was able to take part in the shows too.

“For the spring semester of my senior year, I was able to, with two other students, curate a show on African art called ‘Get Real,’ which was really … rewarding,” Gardner said. “I also showed some of my own personal work in the student senior show, so I’ve definitely been fortunate to show stuff, curate stuff, and now, I get to oversee it all for a little while.”

Gardner will be temporarily filling the role for Handwerker Gallery director Mara Baldwin while she is away for the fall semester on parental leave. Despite her brief stay, Gardner will manage three events at the gallery this semester. Baldwin said that Gardner’s focus will be on smaller, behind-the-scenes administrative work rather than curation or planning.

Alongside her responsibilities at Handwerker, Gardner will be working on a small exhibit for the display case in front of the art history department — which will include pieces from the Handwerker’s permanent collection of art — as well as an installation for Muller Chapel.

“That’s the boots-on-the-ground kind of stuff that I’ve been doing,” she said. “My supervisor, Jennifer Germann, … knew I wasn’t going to be doing any specific curation for the gallery, [so] she wanted to … offer that as something for me to flex my creative bones.”

For “Ambiguous Territory,” the gallery is broken up into three separate sections — the atmospheric, the biologic and the geologic — with the art ranging from photographs to sculptures and a documentary-style video with a false narrative. The artists of these pieces pose both ominous and optimistic visuals about the relationship between humans and nature, and often their concentration is on portraying the effects of climate change, Salomon said.

“They’re not saying, ‘Here’s our solution for that problem,’” Salomon said. “It’s kind of like a mirror: ‘Here’s the world you’re creating.’”

Similarly to the exhibit itself, Salomon said, the curation process was equally deliberately focused on collaboration.

Gardner worked alongside Baldwin and Salomon on the three-weeks-long installation of “Ambiguous Territory” and helped with the logistical elements as well.

“I feel very familiar with all the pieces in the show,” Gardner said. “It offers up a lot of self-interpretation.”

The opening reception for “Ambiguous Territory” will take place 5 p.m. Sept. 5 in Handwerker.