Alumni’s alternative trio to make their debut this weekend 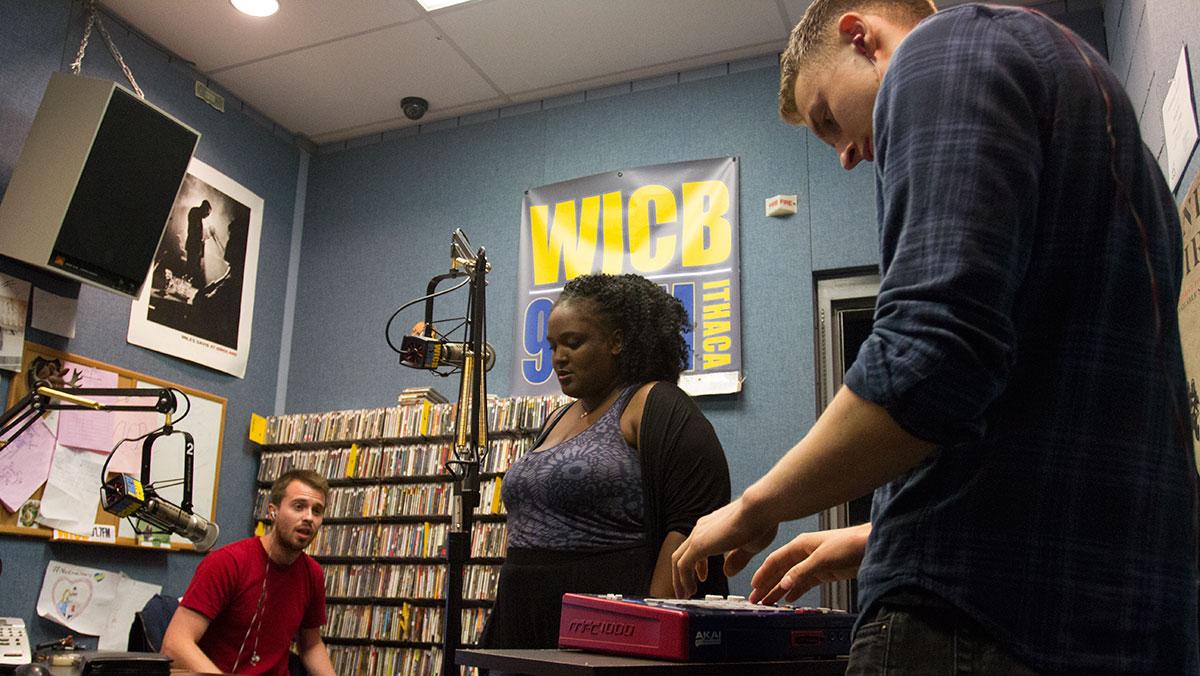 Kait Turket/The Ithacan
Members of the newly-formed trio Alter in the studios of WICB on Sept. 22.
By Cecelia Morales — Contributing Writer
Published: September 22, 2015

Having worked with Second Dam, Ithaca’s well-known local band composed of students from the college, the two are excited to finally showcase the music they’ve been working on in an intimate show at 10 p.m. Sept. 25 at the lounge.

“This project has kind of been on the back burner for probably about two years now,” Dewey said. “I would say it really kind of got started in earnest around December of 2013 or so, but Wolf and I have been working together for a while before that. I produced the first two Second Dam records, so we’ve kind of had a partnership going for a long time before we were actually creating music together for this project.”

Featuring Weston on vocals, Dewey on production and alumnus Jason MacDermott ’14 on drums, Dewey said Alter’s eclectic style stems from the band’s ability to work independently and come together as one collective sound.

“I spent a summer in Berkeley, California, and I didn’t have any pianos or guitars or any instruments at all,” Dewey said. “So, to be creative, I started chopping up my iTunes library and kind of tried to create some music from that. I ended up sending some demos to Wolf … and we just kind of started writing over that, sending ideas back and forth.”

With a strong emphasis on unity, Alter focuses on merging each member’s personal musical influences in an effort to break apart customary genres.

“It’s really important for the both of us to kind of feel like this [project] is one, but at the same time we vibe off of each other in very clearly different ways, while maintaining this singular project that we’re both really proud of,” Weston said. “I tend to say that I paint a lot of broad strokes constantly, and Steve does an expert job of filling in the lines and explaining.”

After working with several band members at once with Second Dam, both Weston and Dewey agree that their current musical outfit has much more elbow room for each member to concentrate on their own interests. Yet when asked to describe their sound to a potential listener, Weston tried to steer clear of a definitive term.

“We sound like iTunes shuffle,” she said. “I always found this question super hard because … I feel like, as an artist of color, there are always some pre-definitions that you kind of have to battle. So every time I make something, I’m committed to not having any sort of identifiable box that it’s already in because I’m aware of the ones that I come up against being just the person that I am.”

Just days away from its debut, Alter’s preparation for the live stage is merely the beginning. In addition to continuing to develop its music, the band already has two shows lined up in Brooklyn on Sept. 30 and Oct. 10 to promote its latest release. But for now, the band’s excitement centers on breaking out into Ithaca’s local artist scene.

“A big focus for us is just getting out there a lot,” Dewey said. “Just to get out there and play as much as we can.”