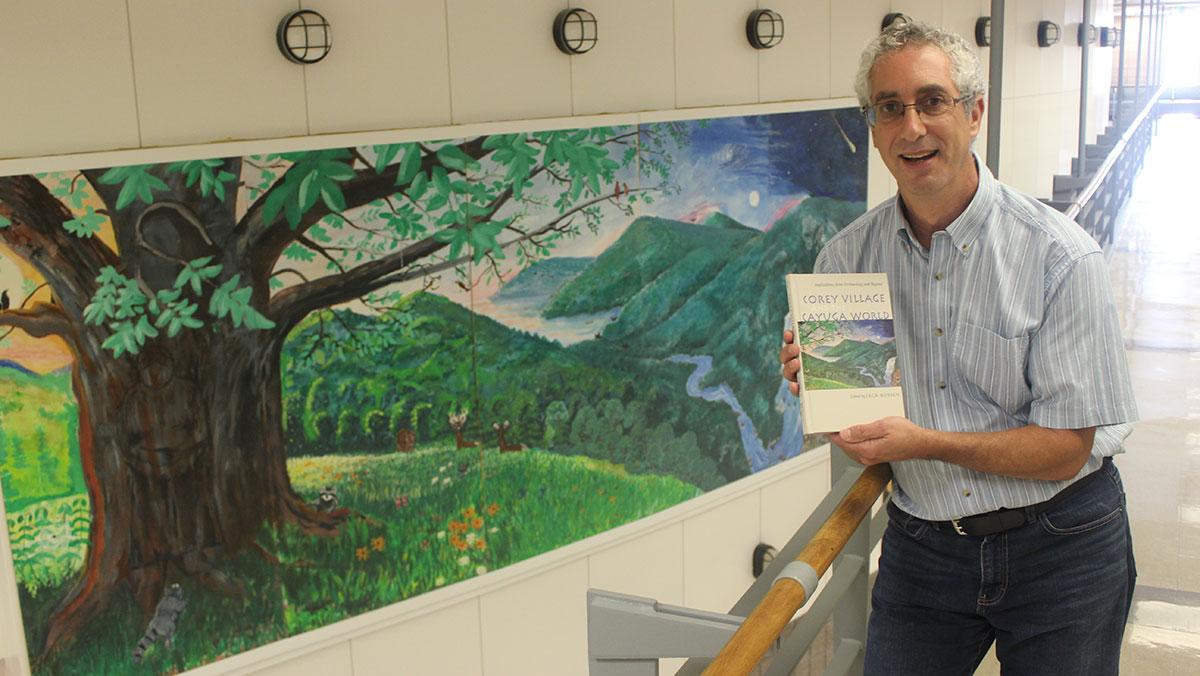 Karielle Wiliams/The Ithacan
Professor Jack Rossen poses in front of the mural in Williams Hall that inspired the cover for his new book.
By Serena Weiss — Staff Writer
Published: September 8, 2015

Jack Rossen, professor and archaeologist in the Department of Anthropology, recently published his book, “Corey Village and the Cayuga World: Implications from Archaeology and Beyond.” It is a work of indigenous archaeology, and Rossen conducted his research from the perspective of a 16th century Cayuga village, using their customs to guide his process of excavating and writing. He focuses on validating native wisdom and oral histories that have been sacred for thousands of years. Ithaca College alumni also contributed writing to the book while they were studying at the college.

Staff writer Serena Weiss spoke with Rossen to ask him about his new book, the research and hard work involved, and the process of putting it together.

Serena Weiss: What inspired you to write the book?

Jack Rossen: It was many years of research in the field, excavating, field schools with students and working in the lab with artifacts. There is also this issue of native people being shut out from their own history and having no say. Most archaeologists go in and they excavate in native peoples’ homelands without even asking them, or they aren’t even aware of it, so to include them is a new way of thinking in archaeology. It’s called indigenous archaeology. It’s still a minority way of doing it, and we are hoping to encourage more people to do it. We have to get the deep history, so I did it through the lens of a 16th-century Cayuga village right before European contact. I have also excavated other sites that are summarized in there. The other questions that we are looking at are how old is the Haudenosaunee, or Iroquois Confederacy, and most archaeologists have said it’s very late — it may have been a reaction to the European arrival or just earlier than the European arrival. Now we have the first evidence that in accordance with the oral histories of the Haudenosaunee, it’s over 1,000 years old, so that is about not just validating native wisdom but validating the oral histories that have been so carefully kept for thousands of years by the Haudenosaunee.

SW: When did you start the process of writing the book, and what was that like?

JR: The process really begins with the excavations, which began in 2003, and I finished the excavation in 2005. The painstaking work of doing the artifact analysis was really the bulk of the work and because we spent probably 20 times the effort in the lab than in the field, so getting stuff out of the field is just the beginning. I wrote the book mostly when I was on sabbatical a year ago — I took one semester — and then it goes through a review process, and some of the reviewers didn’t like it because the book is a little bit revolutionary in terms of its perspective, and so reviewers said things like, “I wouldn’t recommend it except for the excellent analysis and materials.” What they are saying is, “I don’t like the beginning chapters. I don’t like the end chapters that are philosophical.” So we had to go back, and I actually had to explain more, but I really was worried that it would be watered down. Thankfully at Syracuse University Press, they allowed it to be published without watering down the messages that I wanted to say about how archaeologists should be doing archaeology and how some histories really need to be corrected.

SW: Where did the research come from?

JR: Certainly, there are different chapters in the book on different artifacts types. For example, the pottery styles — that tells us that there was intermarriage between the Cayugas and groups like the Senecas — and trade items, and there’s the stone tools that tell us about fishing activities and hunting activities of the site, and plant remains. One of the big things we learned at the site was that it was a medicinal site — a lot of medicinal activities — maybe it was even partially specialized that people were coming to this village from all over the area to be healed, and there is even a place near the site that we think there was the original herb gardens and a path from the site down to the herb gardens. We have a lot of medicinal plants on site, and we have small palettes that they were probably grinding the herbs on, and this comes out of the very specialized artifacts studies.

SW: What was your experience like collaborating with archaeology graduates from Ithaca College?
JR: Ithaca College students wrote several chapters. They were students at the time when they were doing their work on the book. I actually have students working on my next book that is already in progress. This summer, I had three Dana interns working with me in the lab and five students in total. To me, … one of the most rewarding aspects of the research is that the students can learn how to work with artifacts. In fact, I have open volunteer hours that anybody can come to at the Landon Hall Archaeology Lab, where we wash and sort artifacts, and the anthropology students can actually do senior honors theses. I have four students doing senior honors theses this year on artifacts from these sites. For the book, some students are working with the pottery, some students are working with stone tools, some students are working with fishing equipment like fishnet sinkers. We even have students working on historical archival work — lots of different projects. It is important to note that Ithaca College has supported the research for years through summer research grants, summer archaeological field schools and Dana internships. The students are not just doing stuff. They are actually coming out with professional publications. A lot of these students are going on to grad school in archaeology, and they have a great head start because they not only know how to handle artifacts in the lab, but they also know how to write for publication. I am really proud of the students. They were great. They are getting hands-on experience, and you can’t beat that.