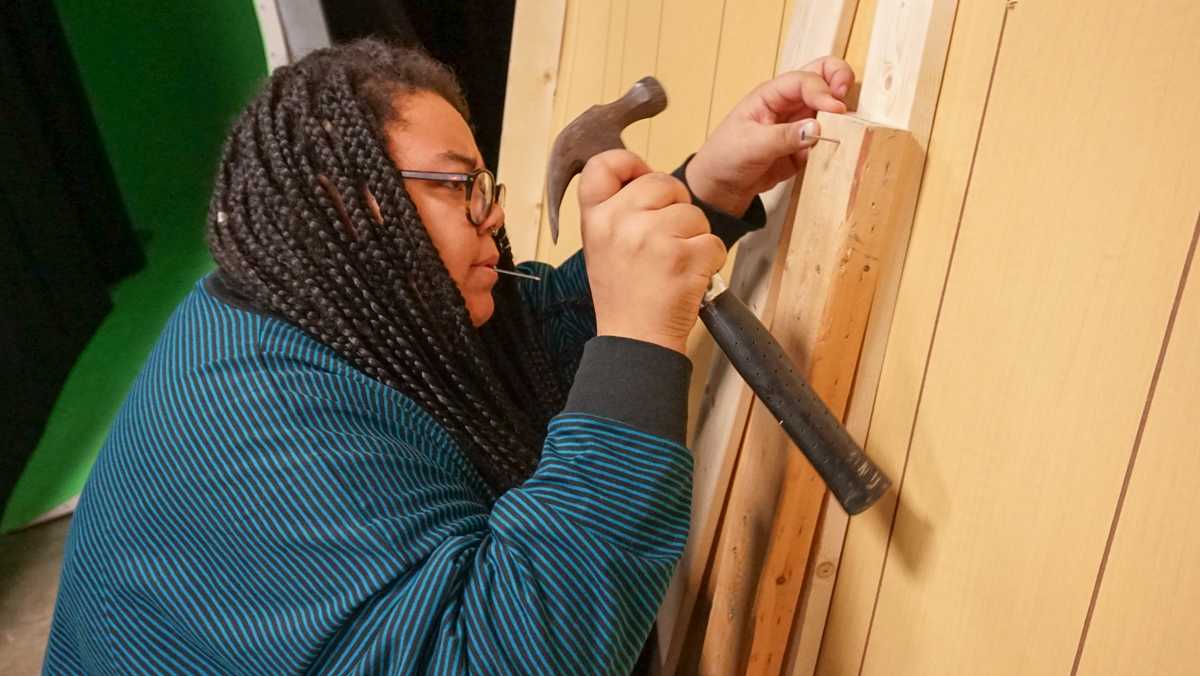 Sabrina Chang
Senior April Carroll and a team of volunteers began constructing her exhibit Dec. 9. The exhibit will be interactive and include art and letters from women and queer people of color.
By Avery Alexander
Published: December 11, 2018

Women of color and queer people of color’s voices are often drowned out at predominantly white institutions like Ithaca College. Senior April Carroll is giving them a space to be heard.

“To The EDU That Burned Us and Pulled Us From The Fire” is an interactive art exhibition Carroll created as part of her independent study project through the Center for the Study of Culture, Race and Ethnicity (CSCRE). The exhibit’s goal is to display the complex, hidden stories of marginalized students at the college. The exhibit will be held Dec. 14–20 at The Studio, located in the basement of Center Ithaca.

Carroll said the idea came from her personal life and experiences in attending the college. She said that in classes, she has had to deal with microaggressions, lack of representation in media and feeling the duty to educate white classmates and professors about racism. Carroll studies screenwriting, a predominantly white and male–dominated field.

“I’m a screenwriting major,” Carroll said. “Being a woman of color, I was not prepared for coming into Ithaca College. Ithaca College preaches this idea of inclusion and diversity and welcomeness, but then, especially in the [Roy H.] Park School [of Communications], there aren’t any spaces for the media I was trying to create. … I needed to be the next Steven Spielberg or Quentin Tarantino. That’s not who I wanted to embody. Those aren’t the kinds of stories I wanted to tell.”

Carroll said the stories she set out to tell through her exhibit include experiences of those who often feel silenced in educational spaces. She said her original plan was to write a play about these realities; however, she later switched gears and chose to put on an interactive, immersive art exhibit.

“My topic was talking about disparities, in education specifically, when it comes to women of color being in predominantly white places,” Carroll said. “I wanted to show how it’s so different … because of this intersectionality of being a woman, but also being a woman of color in spaces that weren’t made for them.”

The play was supposed to take place in a dorm room, so Carroll chose to translate the setting into the exhibit. Patrons will be able to move around the dorm and explore the art inside of it. All of the art will be by artists of color.

“It’s going to be a dorm room with completely POC–representational artwork,” Carroll said. “People will be able to go into this dorm room, look through drawers, look through the closets, sit on the bed and hang out on the rug while also being completely immersed.”

The interactive elements are just one aspect of the exhibit, Carroll said. She said she wanted her exhibit to include real messages from people of color at the college.

“I asked women of color and nonbinary folks of color to write a letter to Ithaca College talking about their experience at the school so far,” Carroll said. “I told them that this is what the project is about, but I wanted to know their honest reflections of the school. I want it to be a space for POC to stay comfortable, but I also want it to be a place to highlight the amazing achievements of POC in our community.”

These anonymous letters to the college are colorful, including collages of magazine pictures and words. They will adorn the walls of the room to express students of color’s frustrations and experiences with racism at the college.

One of the artists whose representational work will be displayed in the exhibit is senior Kylee Roberts, who wrote a personal essay about her identity and relationship with her hair.

“I submitted a piece of work that I did my second year at college,” Roberts said. “It was a personal essay. … It was about my journey and trying to figure out what race really meant to me. It’s called ‘Lost in the Kink.’ It goes through a lot of scenarios in which I remember hair being a really big part of my life, being really ashamed of it and being really prideful of it.”

Roberts said this kind of exhibit, in which people of color are able to submit their stories anonymously, is very important, specifically at the college.

“I know a lot of people on this campus … that have struggled being a person of color in their classroom,” Roberts said. “I think art is a really great way to express how you feel when you can’t put it in really plain terms or try to explain it to a white person or a staff or a faculty member.”

Senior Marissa Booker is helping with the setup of the exhibit and assisting in Carroll’s conception of her project.

“I think it is essential to elevate queer voices and queer voices of color,” Booker said. “At Ithaca College, we have a reputation saying that we value diversity and that we support people who aren’t male, cisgender and of western origin. I think it’s very important that we elevate the voice of people who fall out of that stream.”

Carroll said she faced the challenge of trying to achieve representation of all people of color at the college and tried to get as many diverse voices involved as possible by advertising on social media and spreading the word with her friends.

“I didn’t want it just to be black women’s experiences,” Carroll said. “I wanted to be able to reach as many people as possible. … I tried to reach out to as many POC and women of color that I knew and give them the opportunity to write letters and to submit work. I posted it everywhere; I tried to be on different kinds of platforms. If we were in the perfect world, I would say that it would be an even mix of POC people, but it’s hard because there are so few of us on Ithaca College’s campus to begin with.”

Carroll said she is grateful for this opportunity. She said that though changing the format of the piece from a play to an art exhibit was unexpected, it gave her a chance to exercise her creative process and lift up voices of those who are often marginalized.

“There just aren’t spaces for this kind of media and this kind of creation,” Carroll said. “I wanted to be able to create those kinds of spaces and to give people a voice, especially those who have been silenced for so long.”