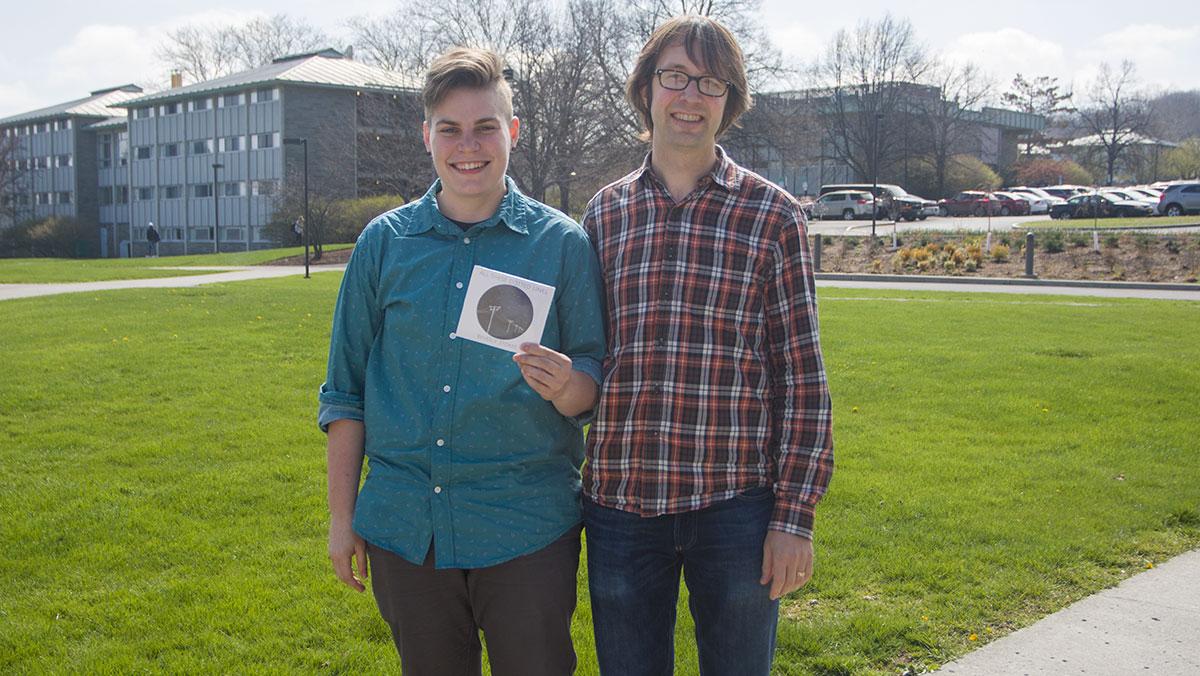 The scalding July sun shines through a windowpane in a small recording studio in Brooklyn, New York, and falls upon the faces of Brooks Miner, assistant professor of biology at Ithaca College, and Beverly Stokes ’10. Beads of sweat form on their faces as they practice playing songs, Miner on keys, Stokes on guitar and vocals. They practice over and over, focused on perfecting every note.

Months later, the sound of a grand piano pours out of an empty Ford Hall in the School of Music the week before classes begin in August. Hands dance across the keys as Miner records Brian Dozoretz, manager of recording services at the college, on piano as a final touch to the record album Miner is splitting with Stokes.

The duo have been working on their first album for over a year now, recording primarily in their small Brooklyn studio and in various parts of Ithaca. Their new indie-folk album, “All These Dotted Lines,” will be available online May 10.

Audio Clip: Stokes & Miner introduce themselves and how they compliment each other as artists.
(Song title: “Into The Morning”)

Stokes graduated from the college as a music education major. She said she played the trumpet during college but began playing guitar more after, which allowed her to transition from classical to folk music.

“It was a pretty emotional transition, really,” Stokes said. “Music majors here, they’re married to their instrument. Switching instruments is almost like a divorce.”

The relationship between Stokes and Miner formed through Miner’s wife, Anna Coogan. Coogan said she met Miner in 1999, played music with him and married a decade later. In 2011, the pair moved from Seattle to Ithaca, where they’ve been ever since.

“The musician community in Ithaca was fantastic and really welcoming,” Miner said. “In Seattle, it was always more competitive. You always had to know someone. Ithaca is collab-oriented.”

This collaborative environment was the perfect match for Miner and Stokes, as Coogan said Miner was searching for a new music goal.

“He was projectless for a while, getting his Ph.D. and all that,” Coogan said. “It’s just great for Brooks to get back to his music after almost a decade of incredible dedication to science.”

The relationship between Stokes and Miner blossomed when Stokes discovered Coogan’s sound and asked to play with her. Coogan said that at that time, she and Miner were performing local shows and their talent sparked Stokes’ interest. Though Stokes was primarily interested in Coogan, she partnered with Miner since he was looking to collaborate with someone new.

“Beverly wrote me soon after I moved to Ithaca, asking to open for one of my shows,” Coogan said. “I really enjoyed her music, but more importantly, we all became close friends, and I’d say Beverly is probably my first official mentee.”

Coogan also performed backup vocals in certain songs. Coogan knew getting another musician to play with Stokes would motivate her to create the record. Although collaboration can be difficult at times, Stokes said, producing with Coogan and Miner felt easy.

“There’s a lot that happens when you start to collaborate with even one other person,” Stokes said. “You really start thinking about your songs. … It just kind of naturally leads to recording.”

Stokes said their album has an indie-folk sound, but placing it into a certain genre is difficult. While some songs have an alternative country feel, the electric piano on others give the album more of a bluesy element. Coogan said the dynamic quality of the album and its shifting genre are what make it special.

“I just love the mystery of the record as well as the simplicity,” Coogan said. “There are layers to the music, but the songs are so crisp and well written — they just flow together. Some of the songs have a full band, some are just a duo, but they all seem to fit together.”

Miner said he has always had a passion for music, specifically jazz. He said they finished the album just before classes started in the fall. Since then, Miner has been teaching at the college, and Stokes has been playing solo venues in the Ithaca area while they refined and produced the album.

“It was a cool for me because I was about to teach for the first time, so I spent the past week thinking about nothing but biology,” Miner said, recalling his experiences on campus last summer. “Then I had this idea for the song. … And I was thinking, ‘This would sound so much cooler with a big, beautiful piano.’”

Miner said that after he recorded with Dozoretz, the album by Stokes and Miner was practically complete. Dozoretz said he originally came to Ithaca to find talent such as that of Miner and Stokes.

“One of the main reasons I chose to relocate to Ithaca was to be involved with these musicians and engineers that are among the best in the world,” he said. “With the vast amount of talent and technology here on campus, it is great to be able to come full circle and connect the local scene with the campus for an even better outcome than either would be able to achieve on their own.”

Coogan said producing the album was tough but that she enjoyed the process.

“By the end it was mostly whip-cracking to make sure the album actually made it to press,” Coogan said. “If there is one thing I have learned in 15 years in the industry, there’s no time like the present.”