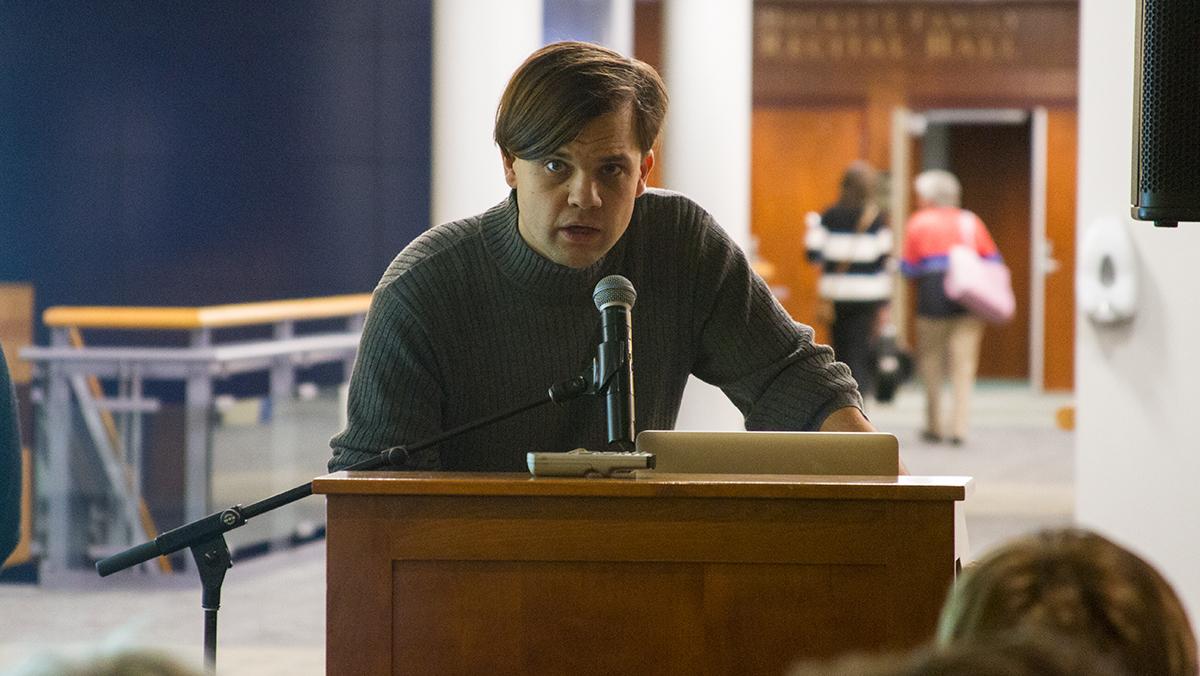 Alex Reed, assistant professor of music theory, history and composition, sits at the piano in his office, the room lit by a couple of lamps casting a soft pink glow. He’s playing an example of the type of music he wrote as a third–grader. Reed, now 37, tilts his head and frowns while improvising the cheerful tune. He stops and tucks a strand of hair behind one ear.

Reed has not stopped writing music since then. He has composed hundreds of pieces in styles ranging from classical choral works to industrial gothic music. He said he has produced 15 albums, toured in 29 states and written two books, along with several articles.

Reed also founded the Ithaca College Music Forum this year, a program that brought three speakers to Whalen throughout the semester. The speakers presented their research on a variety of musical styles — from traditional African music, to contradance, to popular music.

Reed and other music theory faculty members selected senior music education major Emily Kenyon to be a part of the forum to provide a student perspective about topics that would be beneficial to learn about. Kenyon said the forum gives students an opportunity to learn more about music theory from a diverse group of speakers.

“Just as the school frequently invites guest artists to perform, I think it’s just as important to invite guest speakers in the subject of music theory,” she said.

Past events have ranged from a discussion on black feminism through the stylings of Beyoncé, Nicki Minaj, Missy Elliot and Rihanna by philosopher Robin James from the University of North Carolina at Charlotte, to an analysis of African rhythms in music, led by music theorist and musicologist Kofi Agawu.

Though Reed’s first musical project was composing a requiem Mass at 7 years old, he said his interests quickly turned toward alternative European bands such as The Cure and U2. He grew up near Dartmouth College and befriended a student who brought him along to meetings for Dartmouth’s DJ club. He DJed at a radio station for a year and became the music director before other members realized he was in high school. Reed said he was much more interested in the radio gig than his school’s music classes.

“I sang in choir, but I thought it was kind of lame,” he said.

Reed joined his first band in 1998 at the College of Wooster, teaming up with classmates Aaron Fuleki and Jeremy David Long. They began playing shows around town as ThouShaltNot, blending post-punk, electronic and goth styles.

During Reed’s junior year of college, ThouShaltNot played a national tour, which led to a record deal with Dancing Ferret Discs. He said their music was distributed to stores, including Hot Topic, and some of their songs were featured on MTV. The band continued touring and recording until 2013, when Reed got married. He said his new view of the world gave him musical writer’s block.

Reed and Fuleki quickly formed a new band, Seeming, which they describe as post-human, post-Gothic, post-political and post-dance music. The pair have released two albums and an EP in the last two years. Reed said he feels more invigorated through Seeming and that it’s given him a clear idea of what he now wants to do with music.

Reed said he doesn’t exclusively play dark, moody music but often finds himself returning to this style while songwriting. He said the industrial genre allows him to challenge the status quo in a way similar to Edgar Allan Poe and Oscar Wilde, two of his inspirations.

“When I see traditional models of contentment in pop culture, I get suspicious,” he said. “When I hear a nice pop ballad that starts with someone playing an acoustic guitar and singing … about how good it is to wake up next to you, I’d rather hear a dentist’s drill.”

Reed said he became a teacher because the major issues that plague the world get him down, and teaching can alleviate those problems.

“I teach because I want the world to be a better place,” he said. “Even if I’m not solving the problems of police violence or something, I’m opening up more ways of being for my students.”

These ways of being are essentially the roles people play in any level of society. Reed said he is especially interested in helping Ithaca College music students reimagine their roles as musicians. He tries to teach his students that there’s more to music than what happens in their classes.

“I want to communicate to people that there are infinite ways of relating to music,” he said. “The more forward-looking and outward-looking we are as musicians and people, the better our experience of the world will be.”

Reed said he carries this attitude into his classroom instruction by using interdisciplinary teaching methods in music theory classes.

“I try never to compartmentalize music — I always try to put it in a broader context,” Reed said. “I really care about connections music has outside of itself.”

LoTempio said she appreciates this deviation from traditional music instruction.

“Instead of just doing theory and how it applied to music, he really broadened it,” she said.

It’s this mindset that Sara Haefeli, assistant professor of music theory, history and composition, said she admires about Reed. Haefeli was on the search committee that hired Reed as a faculty member in 2013, and she said her first impression of him was that he’s brilliant.

“I think of creativity as the ability to make those connections,” she said. “What he brings is really a different perspective on music, especially compared to the rest of the theory faculty.”

She said Reed’s experience with popular styles brings an important voice to the department.

Reed sits at his tidy desk and tucks another strand of hair behind his ear, carefully forming his next thought.

“I do music because my soul has to do it,” he said. “If I didn’t have a way to scream into the void in the way music allows me to do, what’s the point of anything?”