Astrology rises in popularity throughout the IC community 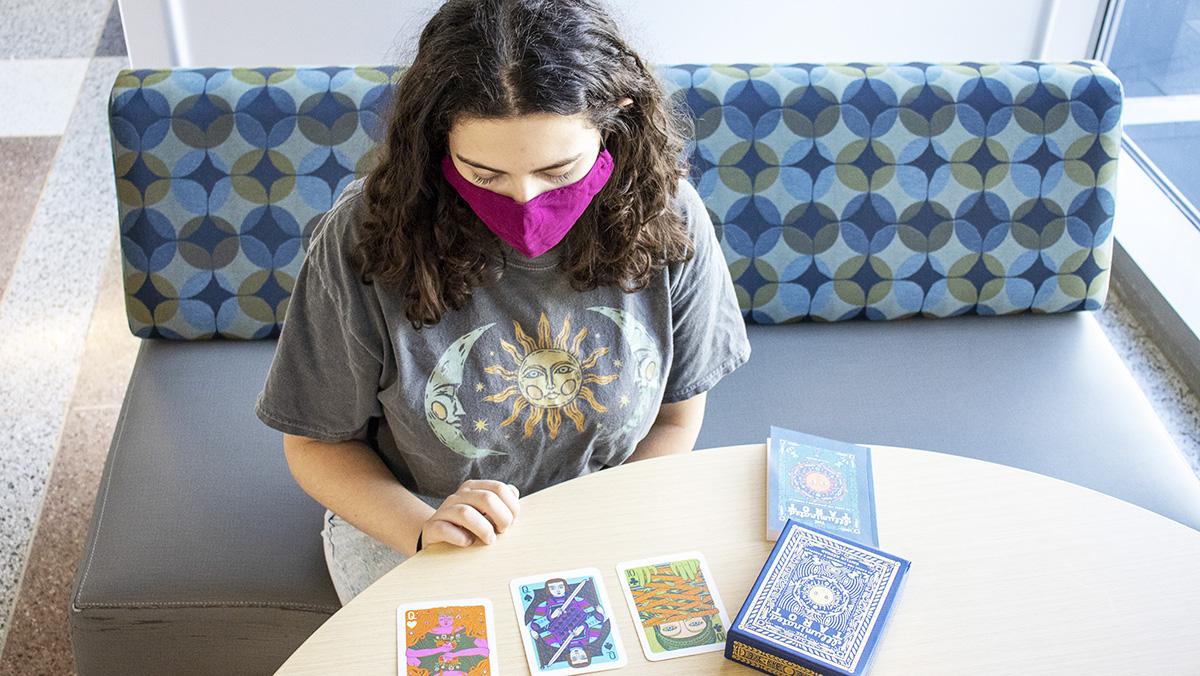 Lauren Leone/The Ithacan
Over the past year, astrology has risen in popularity amongst members of the Ithaca College community.
By Grace Azaula — Staff Writer
Published: September 15, 2021

Astrology, which has grown increasingly popular over the past year, has shifted the way some students at Ithaca College view the world and has become a more prevalent topic on campus.

Astrology is a theory that looks at the ways the patterns, positions and connections between planets and stars impact the world and human beings. The practice uses this information to analyze characteristics like personality and compatibility. There are 12 main zodiac signs that a person can be assigned, and based on one’s date, time and location of birth, each person is assigned these signs for different planets. The sun, moon and ascendant signs are often discussed as the most important parts of one’s astrological chart.

Sophomore Claire Henderson said she was always fascinated by astrology as a child and began to research it more in middle school and high school. She said for her, astrology is a way to understand herself and others on a deeper level.

“I have a lot of anxiety around people, I think that’s where my anxiety really manifests through my relationships with others,” Henderson said. “And this is a way that I can really know where a person is coming from. … And I look at their chart, all of a sudden, I have so much empathy and understanding from where this person is coming from.”

Sophomore Rachel Williams said she became more interested in astrology at the college because of the supportive community.

“Here it’s very, like, liberal arts, most people like astrology, that kind of thing,” Williams said. “So it is nice to be able to talk to people about it, even if it’s not serious. It’s just kind of a fun topic, so I really like it here, and I’ve definitely seen it integrated into Ithaca. I’ve made friends and our first conversation has been something related to astrology. It’s a good conversation starter.”

Astrology dates back to 3000 BC, when the Babylonians discovered that the positions of constellations between the sun and the planets can be translated into segments of time. They identified 12 time segments which are the 12 zodiac signs used in modern astrology. This ancient tradition is the basis of modern astrology.

“It’s declining, but there still is an issue within … mainstream astrological circles, that this is a fated thing that’s going to happen to you, or the planets are making you do this, or you are kind of like a puppet on a string, and you don’t really have any choice, like ‘Oh here comes Pluto, I’m screwed,’” Hall said. “And so basically evolutionary astrology, the evolution is the evolution of your soul and the evolution of knowledge, but it basically puts you in the driver’s seat.”

Hall also said he is pursuing a certification in vibrational astrology, which is an evidence-based form of astrology that incorporates scientific methods. Hall said vibrational astrologers collect information from a database of over 20,000 individuals to come to data-backed conclusions about astrology and astrological signs.

“Vibrational astrology tests astrology to see what works best and where the evidence leads, you know, follow the data,” Hall said. “It’s what science goes through and how science grows bodies of knowledge and astrology needs to go through the same thing. So evidence based research is moving astrology into the 21st century.”

“Because of the internet it’s a lot easier to learn about astrology, which I think is cool,” Nolfo said. “I’ve learned a lot about it beyond birth charts and stuff, like what it means when Mercury’s in retrograde or stuff like that, and so I think a lot of the information is really accessible which is cool for anyone who wants to get into it.”

Through social media and the internet, Instagram influencers like Leona Moon use their platforms to create entertaining, relatable astrology memes and posts. Other influencers like Arantza use videos on platforms like TikTok to provide personalized readings, breakdowns of astrology and comedic content. Many of these influencers have hundreds of thousands of followers who consume astrology content for entertainment and information.

However, Henderson said the increasing popularity of astrology can also be a danger to the field.

“I think that the modernization and the virality of astrology has changed the way that it’s spoken about, which I think increases people not taking it seriously,” Henderson said. “There’s a lot of talk about sun sign astrology and just a very basic level. For me, I was introduced to that and then it led me down this huge path of what it all is, but a lot of people stop there and kind of take it for granted. And I do think that that’s problematic just because it doesn’t really make sense when you talk about it like that.”

Williams said that although she thinks astrology is a helpful tool, it does not define all aspects of a person.

“You aren’t only your chart,” Williams said. “lt’s just kind of like a blueprint and then there’s more that goes off of that. And there’re so many different aspects that go into how things connect … So I think that sometimes people hear it and it can almost make a boxed-in image of who someone is. And that’s part of it that I’m not a huge fan of.”

Henderson also said the mainstream form of astrology can be exclusionary and negligent of certain communities because it has been adopted by predominantly white, cis people.

“When things go viral and are very mainstream like that, it takes on a white … cis-domination and that’s with anything that goes mainstream in this society,” Henderson said.

Astrology is rooted in ancient traditions from Mesopotamia, China, the Middle East, Central Asia and India. People of color who have carried down the tradition of astrology have often been isolated or dismissed because of their beliefs. It was not until white communities, like the college — a predominantly white institution — embraced the practice that it was accepted as a valid belief.

Though astrology has been increasing in popularity, junior Margaret Harper said they believe one of the reasons people continue to disregard astrology is because it is a tradition dominated by women.

“The astrology community is heavily made up of women, so it’s viewed with a lot of sexism,” Harper said. “There are stereotypes about girls that are less intelligent because they believe in astrology.”

Hall said he hopes people embrace astrology in a more mindful way, working to gain a deeper understanding of astrology so that they can better understand themselves and others.