At the ReUse Center, second-hand objects find a home 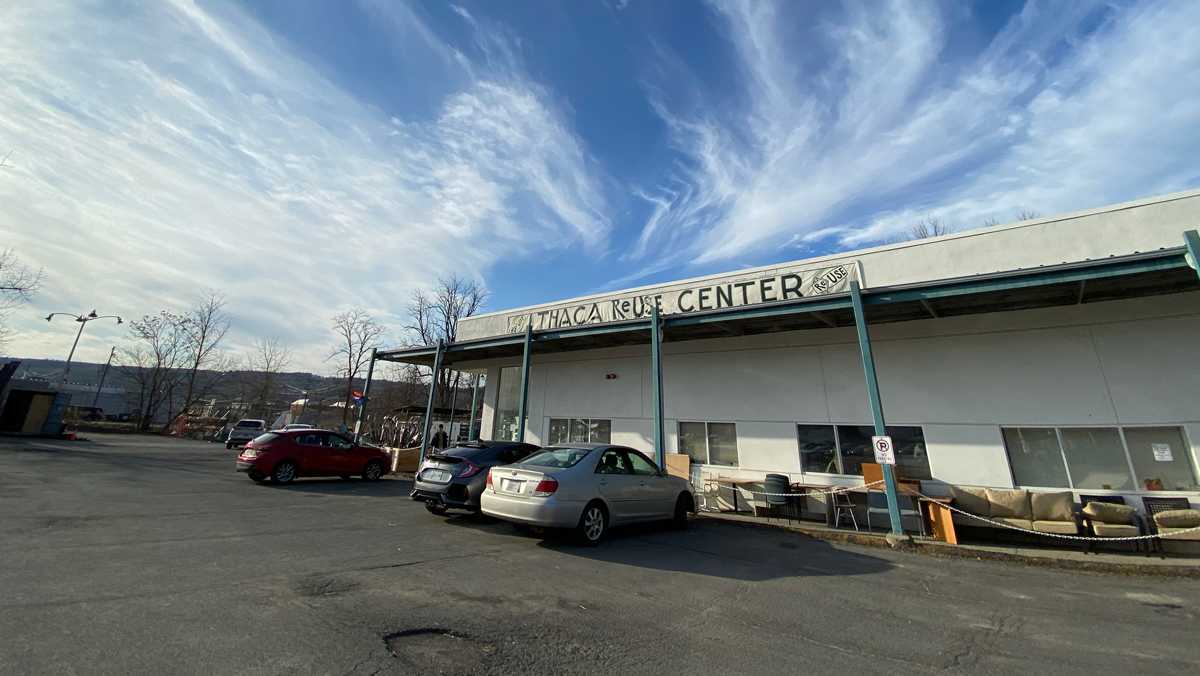 Kristen Harrison/The Ithacan
The Ithaca ReUse Center is a nonprofit organization that showcases second-hand items. The shop is closed until further notice due to COVID-19.
By Antonio Ferme
Published: April 5, 2020

Second-hand items fill the shelves of the Ithaca ReUse Center, located on Elmira Road in Ithaca. Shoppers can browse through a number of items — from zany lamps and bright, floral cotton pillows to colorful picnic bags and suitcases.

Diane Cohen ’87, executive director of the Finger Lakes ReUse Center, said the nonprofit organization strives to enhance the economic strength and sustainability of the Ithaca community. The store’s affordable pricing model allows used items to find new homes rather than being thrown away, she said.

Cohen was the head of the original team that opened the organization’s first of two locations in 2008 at the Triphammer Mall. The location on Elmira Road attracts a diverse range of customers, Cohen said.

“It has been a really fun and enormous project to see how much reusable stuff is out there,” Cohen said. “What community good can we do with these items? How can we make a thriving and impactful organization for this community? This seems to have attracted a lot of really fabulous people to this project.”

Due to the COVID-19 outbreak, the board of the Finger Lakes ReUse Center determined March 18 that they would close their two ReUse Centers until further notice. This includes all their scheduled programming and Ithaca Fixers Collective repair group.

“We expect to reopen in the coming weeks in order to maintain access to essential goods, especially those who are most vulnerable,” the organization said on its Facebook page.

The organization has been actively working to expand its online catalog on its eBay page. It also has a watchlist page on its website that allows customers to request materials they are in need of or most interested in.

Store manager Ivan Yalanzhi said his staff is a mix of full-time and part-time employees, as well as volunteers. Yalanzhi said the staff originally consisted of three members back in 2011 and has grown to 20 people since. With volunteers, he estimates, the store probably has over 40 helpers.

“A lot of our regular volunteers have a specific set of skills based on what they’re working on,” Yalanzhi said. “For example, we have a volunteer who is really knowledgeable about art. She has been working with us for a few years and is really good at looking at art and determining the value.”

Yalanzhi said his store stands out from others in the area because it tries to adapt to its customers’ needs in any possible way. Workers at the store on Elmira Road test all the electronics that go on the shelves and provide warranties on those items. The store also has a discounting strategy that marks items down 50% to 90% from average retail prices. Staff members also work on an appliance repair program so they can identify if appliances need any type of repair.

“We provide warranties on all our computers, but we wanted to expand this offer to other appliances where we can take appliances and test them,” Yalanzhi said. “There a lot of components to figure it out, but if they needed a small repair, we could find a way to fix it.”

Cohen said the ReUse Center is a product of many collaborations. For example, the center partners with the Friendship Donations Network, a fresh food distribution network that delivers food products to both ReUse Center locations on a weekly basis for customers to pick up.

Yalanzhi said his store initiated a program last year that allowed people with financial need to apply for a grant online for basic household supplies. They can apply through human service agencies like the Department of Social Services or the Catholic Charities of Tompkins. However much money is granted, the ReUse Center will match that number and give those customers in-store credit, Yalanzhi said.

“We help people fix their broken items and sometimes even teach them how to do it themselves,” Johnson said. “If somebody walks in with their grandmother’s table lamp that has a broken socket or something like that, they either want to borrow tools to fix it or learn how to fix it. We are really broad and flexible on the kind of people we will take in.”

Like Johnson, most of the members of the Fixers Collective are retired. He said the ReUse Center has granted them a community space where they can pass on their skills to other people. Johnson said one member named Roger likes to work on items like broken chair legs. Another one of the volunteers, Andrew, works with electronics fans, vacuum cleaners and cassette players.

Cohen said there is an increasingly apparent need for reuse centers in local communities across the country. She said her time working in this industry has given her a sense of how much stuff is really out there and how she could be doing something much bigger.

“I feel very fortunate to have stepped into this emerging industry, and I believe that there’s going to be a lot more of it,” Cohen said. “We want to empower people to repair the materials that they care about and avoid buying something new if they don’t have to.”