Connor Duffy, Alex Klein/The Ithacan
Two students from the African Drumming and Dance Ensemble talk about their experience in the class and their performance.
By Mary Ford — Managing Editor
Published: March 1, 2017

With powerful ballads, moving spirituals, lively drumming, colorful dancing and a jazzy tuba solo, the Black History Month Concert on Feb. 25 engaged students and members of the community in the rich history of African and African-American music.

Baruch Whitehead, associate professor of music education and event organizer, said he thinks the music in the concert was particularly qualified to promote unity and community.

“This isn’t just about black culture — this is human connection we’re striving for,” he said. “I tell people all the time: Music is a human connection, and we all respond to it in different ways.”

Senior Allan Bowen, a member of the African Drumming and Dance Ensemble, said another compelling element of the concert was the storytelling behind the dances and songs. During the West African Drumming and Dance Ensemble portion of the concert, dozens of students played traditional drums and danced in large group routines. One of the dances, called “Ashanti Royal Court Piece,” told the story of a sword stuck in the ground that no one could pull out.

In another act, the dancers waved white cloths in each of their hands, imitating the flowing fabric with their bodies as they stepped in time to a bright trumpet melody. Then some of the dancers took over the drums while others continued the dance — even when some small groups or solo dancers took their turn at center stage, the performance emphasized community. 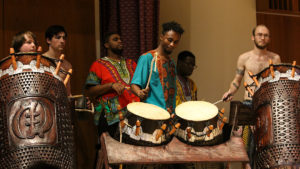 All dancers wore patterned skirts and shirts, and the Dorothy Cotton Jubilee Singers wore bright striped sashes that mirrored those in African countries. Whitehead said the designs were significant in some African cultures.

“I think a lot of third-world countries, they strive to have something that’s really bright because there’s so much suffering,” Whitehead said. “I think those colors inspired people to be happy and have something to look forward to.”

Bowen, who was also a part of the male group dance called the Jera, said he felt like the performers were moving as a single unit.

“When the drums played, we matched the percussion,” Bowen said. “When I was playing the drums, I liked how some of the dancers had pretty awesome faces. … They knew what they were doing, and they looked so confident.”

Sophomore Jasmine Pigott is a member of the Worlds of Music class, a three-credit course that functions as an introduction to music of different cultures and contexts. Pigott, who performed a tuba solo during the show, said she was excited to share her music with such a large audience.

“Hearing the audience clapping along encouraged me,” she said. “It let me know that they were listening and enjoying the music as much as I did. It got me excited to experience the power of music in affecting emotions and unifying a group.”

Junior Josiah Spellman sang a solo with the Dorothy Cotton Jubilee Singers, a choir led by Whitehead that consists of students and community members. Spellman said that although the song, called “Peace Be Still,” was written in another time and for another purpose, it has a universal message that rings powerfully today.

“The song is about peace,” he said. “In another time, people needed peace to get through racism, segregation — whatever it may be. But it’s so wonderful that now, in this time, I can use that same song that was created for that purpose to share what that peace means to me.”

Whitehead said the purpose of the Black History Month Concert was not to limit the audience’s experience of African culture to one concert but to connect these deep stories and experiences with their reality.

For Spellman, even though the concert was called “Black History Month,” the event was far more about connecting people to the story and the struggles of people of color.

“It provides another opportunity to bring people together, not solely based on just black history,” Spellman said. “It allows people to see, or to understand, that there was a struggle and that this is how we made it through. With that, hopefully, they can get through their struggle as well.”