Bob Dylan and his Band perform on campus 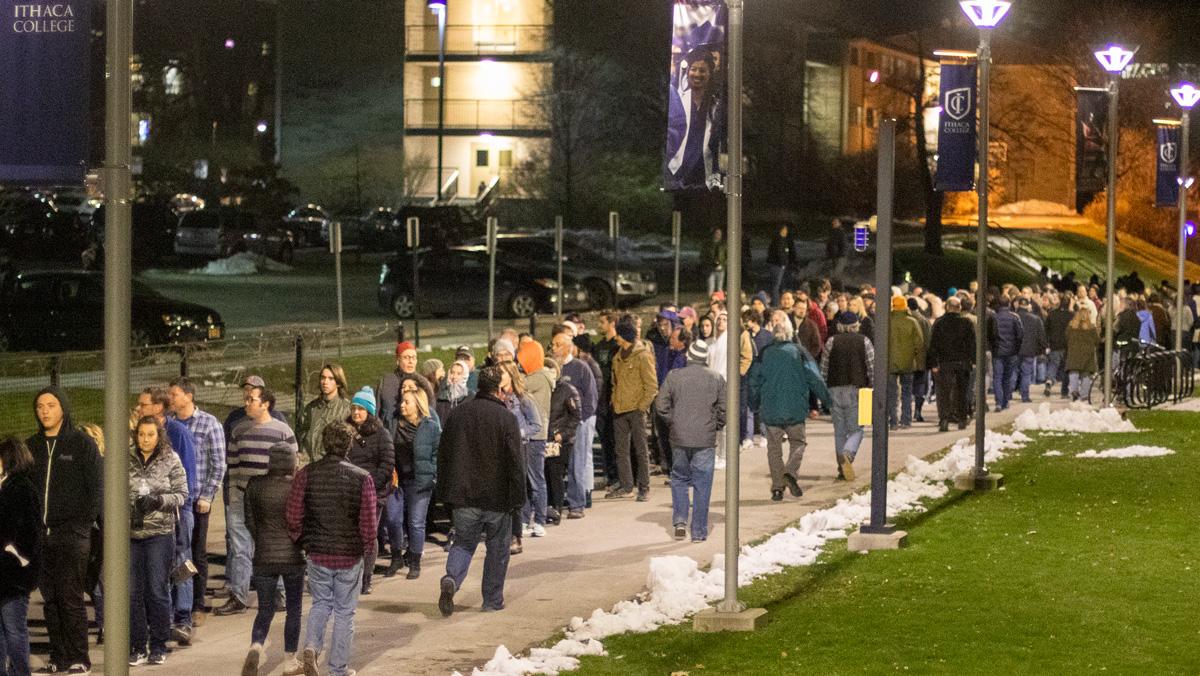 Alison True/The Ithacan
A crowd of concert attendees lines up outside of the Athletics and Events Center to watch Bob Dylan and his band perform Nov. 17. The performers did not allow media photography inside the concert.
By Hannah Fitzpatrick
Published: November 21, 2019

As the rows of seats placed across the Ithaca College Athletics and Events Center began to fill for folk-rock singer Bob Dylan’s concert Nov. 17, the crowd inside started to buzz with anticipation. In one row, a group of older men eagerly discussed their experiences at past concerts. In another row, a father helped his young son put on an oversized tour T-shirt. Suddenly, the overhead lights switched off all at once, and as the first few chords of “Things Have Changed” played, the crowd erupted with booming cheers.

The concert, which was organized by local concert promoter Dan Smalls Presents (DSP) Shows, was the first event Dylan has performed in the area since April 2013 and his first time playing at the college since October 1994. Out of the 6,700 maximum capacity of the A&E Center, approximately 4,100 people were in attendance, with people of all ages enjoying both Dylan’s classic hits and his lesser-known songs.

Junior Coltrane Herrmann said he has been a fan of Dylan since he was a kid but grew to appreciate his music more intensely when he first started college. When he initially heard about Dylan’s show at the college, he said that he was skeptical about the show’s legitimacy, but he knew it was a once-in-a-lifetime opportunity he could not pass up.

“I thought the concert was fake at first because I didn’t think that Ithaca could actually book someone like Bob Dylan,” Herrmann said. “He has got to be the most famous person that’s ever been on this college’s campus. We’ve got some good musicians here in the past, but this is another level. I knew that if I didn’t go, I’d kick myself for it for the rest of my life.”

During the concert, the packed crowd danced and sang along to some of Dylan’s well-known tracks, like “Not Dark Yet,” “Tryin’ to Get to Heaven” and “Girl From the North Country,” much to the delight of fans like Mark Baustian, assistant professor in the Department of Biology. He said that compared to previous Bob Dylan concerts he attended, this show stood out to him because the band’s sound was more uniform and clear.

“The last time I saw Bob Dylan, it was so loud that you couldn’t even hear the music,” Baustian said. “He can be a little bit tough to understand on a good night, but, during that show, even the music was hard to follow. Here, the band was tight. They sounded really good, and you could more or less figure out what he was singing.”

In addition to the thousands of fans inside the A&E Center, there were also people scattered throughout the venue who could be distinguished by large, green stickers that indicated that they are working for DSP Shows. On one side of the floor, someone with that green sticker helped give out posters and T-shirts purchased by fans at the merchandise stand, while other workers helped people find their seats.

The majority of people with those stickers are students in the inaugural class of the college’s new Master of Business Administration program in entertainment and media management. The program, curated by Phil Blackman, assistant professor in the Department of Accounting and Business Law, allows students to get hands-on experience in the entertainment business by creating their own multimedia production company that develops recording artists, as well as working with local companies like DSP Shows and local venues like the State Theatre of Ithaca to organize live shows in the area.

Jacob Generali is one of the 14 students who are part of the inaugural class in the MBA program. He said though the planning for the concert was in the works months before he started the program, everyone in the program had a crucial role in its organization the day of the event.

“At 11 a.m. Sunday, we all arrived at the A&E Center to help set up chairs, label sections and individual chairs and all other small tasks to prepare for the show,” Generali said. “We then all came back at 4 p.m., where were debriefed on our specific roles which involved ushering, ticket scanning, will call and other customer service tasks. When doors opened at 7 p.m., it was go time.”

Some concertgoers had complaints about the seating organization. Baustian said it took him approximately 15 minutes to find his seat because of the confusing arrangement of the seats,

“This is not a great venue for a show like this because it’s so flat,” Baustian said. “Eventually, I got out of my seat and stood over on the side, and it got to the point where I was fighting with security for a little bit over keeping a pathway, but what are you going to do about it? I’m not going to sit in the middle of the rows and watch the whole show when all I could see was the back of people’s heads.”

Dominique Lazzaro, a sophomore at Cornell University, also had complaints about the ticket pricing for the show. The general public paid $55, $65 or $85 depending on what kind of ticket they purchased, while students at Ithaca College were eligible for a discount of $25 when they used a special code tied to their student IDs. The steep price almost deterred her from attending the concert in the first place.

“When I first heard about the show, I was debating with myself for weeks on whether or not it was worth shelling out the $80 to see him,” Lazzaro said. “In the grand scheme of things, spending $80 to see such an iconic artist is not that much, but college students like myself who have to worry about how I’m going to get there, the possibility of paying for parking and stuff like that, it adds up.”

Although the concert had drawbacks, it was still a memorable night for many of the attendees. For some concertgoers, the night was a chance to not only make new memories but to be reminded of why Dylan’s music is so important to them.

“I grew up listening to Bob Dylan with my parents, so every time I hear him mentioned or hear his song playing on the radio, it reminds me of home,” Lazzaro said. “Seeing the legend himself emphasized that feeling of home for me. It was definitely something on my bucket list that I’m glad I can cross off.”