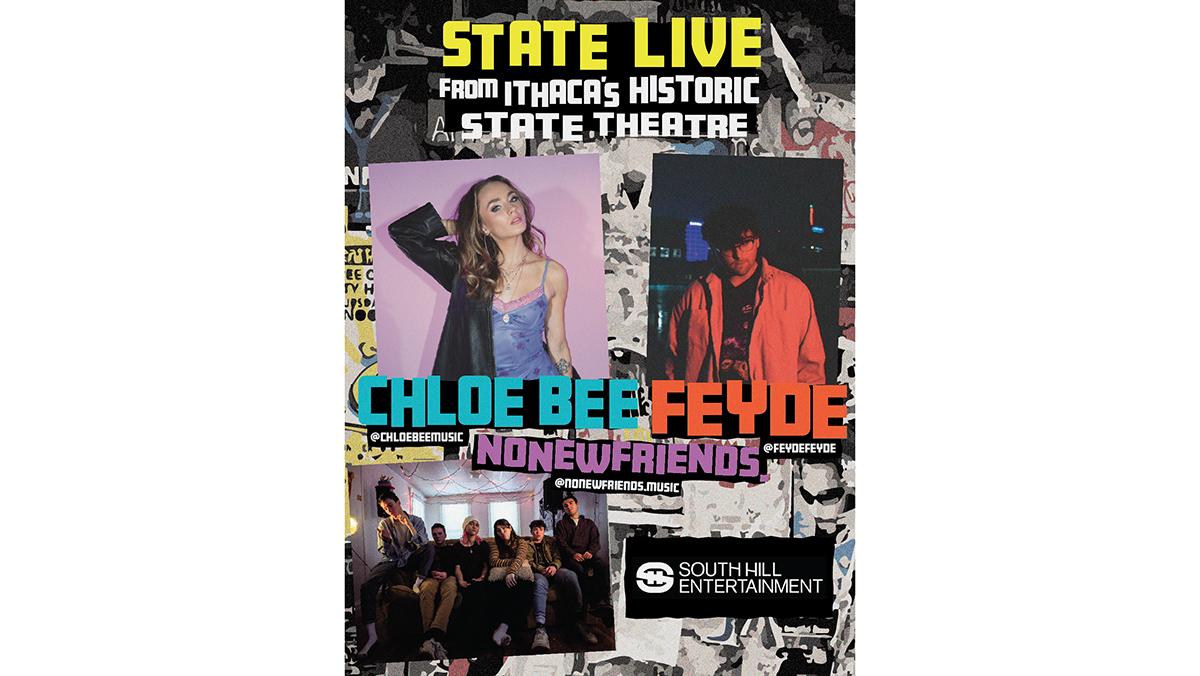 On July 16, at the State Theatre of Ithaca, eight musicians performed to a nearly empty theater that is meant to hold 1,600. Ithaca College’s production company South Hill Entertainment put on “The Showcase at the State”  with help from Park Productions.

Jake Smith ’20, came into play with his marketing and events background. Smith said that most of the leadup to the event was spent trying to figure out a schedule for the artists to perform.

“They all kind of had a similar vibe with the music, so that worked out really well,” Smith said. “We were hoping to have more, but a lot of the people we reached out to just weren’t in the area.”

After South Hill Entertainment signed the artists for the performance, Park Productions brought its setup to the State Theater.

“We had a bunch of cameras set up,” Smith said. “We had a bunch of lighting and in the State Theater ticket booths, we had the whole thing set up with these awesome backdrops with posters in there…They were awesome, they knew all this stuff like the back of their hand.”

John Kearny ’20, an organizer of the showcase, said that while Tompkins County has a COVID-19 vaccination rate of nearly 70%, there are still local and state guidelines that South Hill Entertainment had to follow because of the rise of the Delta variant. In the State Theatre, Kearny had to work with an audience cap of 25 people.

“We had pretty strict COVID regulations to follow based on Ithaca and where they wanted the numbers to be at,” Kearny said. “The State was really really helpful in terms of kind of laying that out for us and telling us where we could do stuff.”

Rob Natoli, production manager of the State Theatre, said that while the theater is not yet officially open, the showcase was a way to transition back to live events, which will begin Sept. 17. Throughout the pandemic, the State Theatre has held other events, like the CFCU Summer Concert Series, which occurred virtually in September 2020.

“I love working with Park Productions,” Natoli said. “We worked with Park Productions for the downtown concert series last year, we are working with them in the outdoor live concert series this summer just to broadcast to people who aren’t necessarily comfortable to come out to shows yet … I’m very familiar with the crew, they are very on top of things and they know their gear. They were a pleasure to work with.”

Natoli said that he would like to have the State Theatre collaborate again with South Hill Entertainment and Park Productions.

“I’ve worked with Park Productions a lot,” Natoli said. “I still work with them every week … we’ve got a really great relationship with the Park School and I have no reason to not work with South Hill Entertainment — they really held things together and we had a really nice day.”

John Hanover, who goes by the musical alias “Feyde,” is a solo act who, prior to performing at the State Theatre, had not yet experienced performing at a large venue.

Feyde said that while he wasn’t performing to a crowd, being able to sing on stage was unique for him as a solo artist because pre-recorded tracks were played in the background without vocals. This allowed him to sing on top of them and hear his complete music in the large auditorium for the first time.

“Seeing that kind of space — I’ve never really performed in a big theater like that, which was really cool,” Feyde said. “Albeit virtually, but being in that space was a really cool milestone for me to get up there.”