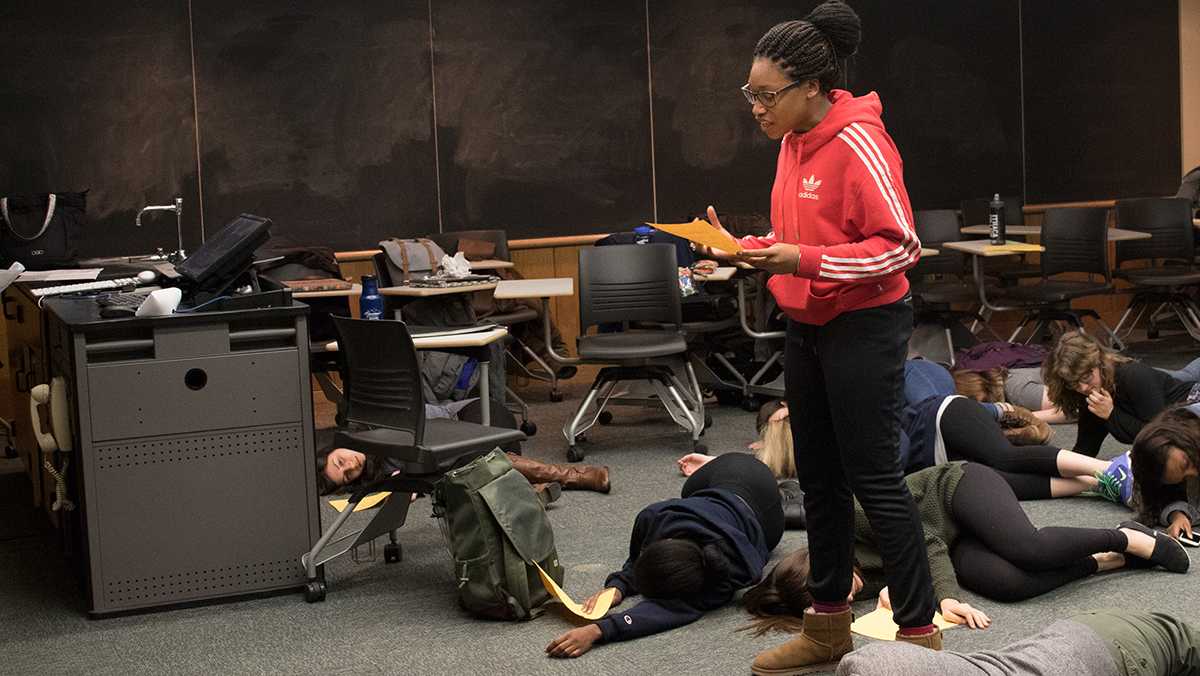 Celine Baumgartner/The Ithacan
Freshman Kayla Brathwaite reads her spoken-word piece toward the end of the play, with her fellow classmates falling onto the floor around her as she reads her poem.
By Angela Weldon, Celisa Calacal — Staff Writer and Assistant Life & Culture Editor
Published: December 8, 2015

Facing the front of the room, several freshmen with cellphones in hand loudly and forcefully say the following line:

“Students shouldn’t spend their college years battling against the administration, other students or themselves.”

With the campus rocked by several student-led protests this semester, outcry against what many are calling an unsafe and uncomfortable campus climate and a call for the resignation of President Tom Rochon, students in the freshman seminar U.S. Social Activist Theatre and Performance: History and Praxis have put together a production based around these recent events: “Student Vs.”

Chrystyna Dail, assistant professor in the Department of Theatre Arts and teacher of the course, said the play was created entirely by the students over a three-week period and is based on the themes of insensitivity and ignorance.

Dail said the inspiration for the play stemmed from the recent events on campus and interviews the students conducted prior to Thanksgiving break with students, faculty and staff. During these interviews, the questions were meant to gauge what people on campus see as issues at Ithaca College, such as racial tensions and a surge in student activism.

Freshman Kathryn O’Connor said her participation in this performance has taken her experience far beyond the classroom.

“I’ve gained so much knowledge of what’s happening on campus,” O’Connor said. “It’s really nice to know that I’m actually doing something that could impact other students.”

After the interviews were conducted and transcribed, the students used the information they compiled to create character studies and provide the foundation for the play.

“It starts very easily about, you know, ‘What was your first impression of the college?’ And then it moves into, ‘When was the first time your opinion of the college changed?’ … ‘What would you think to change if you could?’” she said. “And so they are leading questions a little bit, but it’s a way to get a narrative about people.”

Dail said it is important to study the intersecting roles between activism and the arts because of the ways political performance can achieve social change.

“Historically speaking, one of the ways that the arts has been able to make the greatest change in society is through being active participants in that culture,” she said.

The performance ends with freshman Kayla Brathwaite’s personal spoken-word piece about the negative and racially insensitive Yik Yak posts regarding recent events on campus. Brathwaite said she was upset about the posts because the platform left no room for discussion with those who posted.

“I wrote this poem in the midst of the three protests that have occurred,” Brathwaite said. “I realized the majority of the Yik Yak posts were negative, and it’s very hurtful. Especially since we’re first-year students, this is our first impression.”

This is the first time this course is being offered to solely freshmen, and prior to this semester, it was offered only two times to students as a 100-level class. Because the class is composed of freshmen, Dail said it provides the opportunity to get them immediately involved in the campus climate.

“You don’t make theater for social change about things that you aren’t living through yourself, so it’s supposed to be something that’s directly impacting you,” she said. “And what better than what’s been happening this semester on campus?”

Freshman John Bracken said this performance is his way of contributing to the conversation happening on campus.

“I think theater is a wonderful medium to get a story across,” Bracken said. “Especially as a theater major, this is what I do theater for, to spread a message. It’s great to know that we’re doing something that matters, and I’m doing something that really matters to me.”

From watching the play, Dail said she hopes it motivates audience members to continue the ongoing dialogue on campus.

“I hope that the changes that people are wanting for the campus — whether that be POC or queer-identified people or basically anyone who sees that this campus is not open to all individuals and all perspectives — that they will see this performance and continue the dialogue and continue committing to wanting change here,” she said.

Like many of his classmates, Bracken said he is glad this class and Dail have provided the opportunity to engage with the current movement within the college community.

“It’s nice to be part of the change and at least be an inspiring voice,” Bracken said. “It’s really pulling on everything we’ve learned in this class so far in how to make a difference. It makes me proud to be a part of something.”

The students will perform “Student Vs.” at 2:15 p.m. Dec. 11 in Clark Lounge. The event is free and open to all members of the college community.