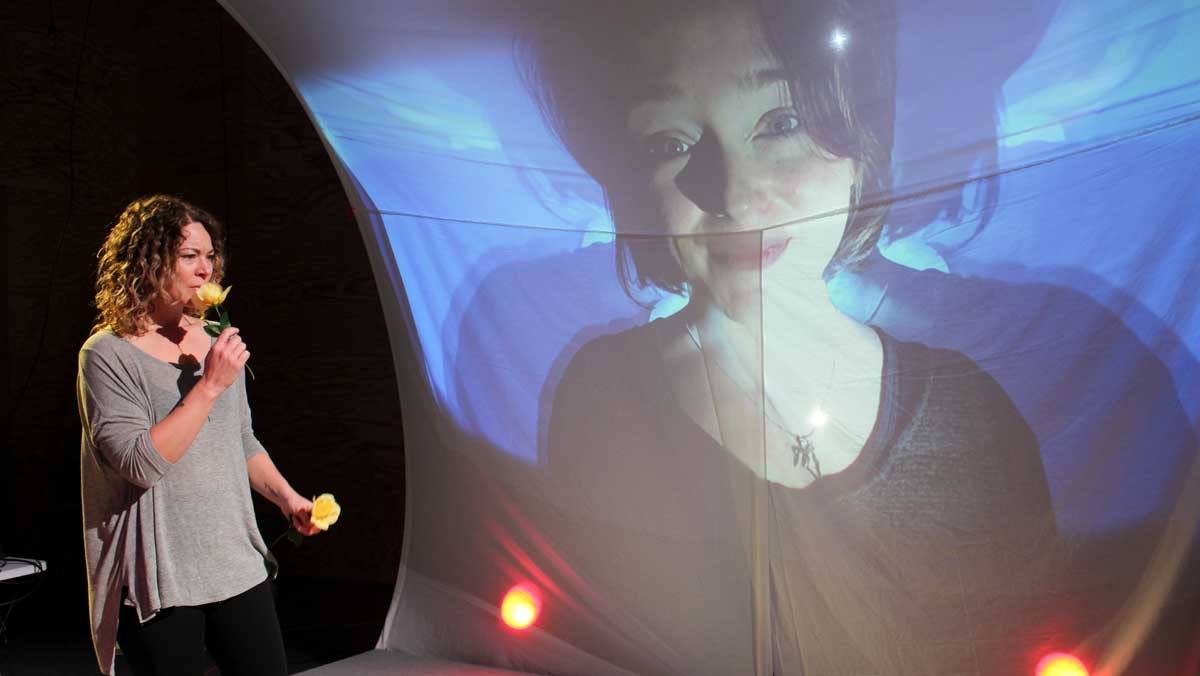 Courtesy of the Cherry Artspace
From left, Erica Steinhagen and Jennifer Herzog star in “What Happens Next,” which runs from Sept. 14–23. Herzog serves as associate artistic director for The Cherry Arts and is a lecturer in the theater department at Ithaca College.
By Kara Bowen — Contributing Writer
Published: September 13, 2017

Wooden walls, rows of chairs and a canvas backdrop are bathed in blue light: The stage is set for an avant-garde performance space to make its debut in Ithaca.

The Cherry Arts, an Ithaca-based theatre company, will be opening its own theater and arts venue. Located at 102 Cherry Street next to the Cayuga Inlet on Ithaca’s West End, The Cherry Artspace will formally open with a ribbon-cutting ceremony with Mayor Svante Myrick on Sept. 13.

Founded as a collective for Ithaca-based artists in 2015, The Cherry Arts began untied to any specific location. In December 2015, The Cherry Arts performed its first play, “White Rabbit Red Rabbit” by Nassim Soleimanpour, at Circus Culture in Ithaca’s Press Bay Alley. The Cherry Arts continued to use local venues to perform plays such as “SPAM” by Rafael Spregelburd and “Winter Animals” by Santiago Loza. It also produced an audio-only play titled “Storm Country” based on the Ithaca-based novel “Tess of the Storm Country” by Grace Miller White.

Jennifer Herzog, associate artistic director for The Cherry Arts and lecturer in the Department of Theatre Arts, said that without a space to call their own, The Cherry Arts had focused on introducing Ithaca theater-lovers to nontraditional, international work. Herzog is one of a handful of professors, alumni and students involved with the collective.

“We’re the ones offering a fresh, avant-garde Ithaca theater experience,” she said. “We got to do that before the Artspace. Now that we have our venue it’s going to expand and become even more exciting.”

The Cherry’s 2017–18 season will begin with the play “What Happens Next,” written by Saviana Stanescu, Romanian-born playwright and professor at the college. “What Happens Next” is a multimedia play that focuses on two women trying to understand themselves and their relationship, each scene taking place in the same technologically advanced room.

Stanescu came to New York City to pursue an MFA in dramatic writing. After 12 years of working as a playwright and part-time professor at New York University, Stanescu moved to Ithaca in 2013 and has since partnered with The Cherry Arts.

“The Cherry is a really good fit for me because they’re going for more innovative work, more international work — they’re pushing the boundaries of theater,” Stanescu said.

Part of The Cherry’s innovative work lies in the creative process, changing the way plays are traditionally produced in theaters, Herzog said.

“Typically you have less than a month to put a show on its feet in a commercial or non-profit regional theater setting,” Herzog said.

Rather than working within this limited timeframe, “What Happens Next” was developed over the course of a year. The Cherry artists and Stanescu workshopped the script and worked collaboratively to revise the play.

As well as changing the creative process, “What Happens Next” pushes the boundary of traditional storytelling. Described as a “cheerful dystopia” by Stanescu, the multimedia play consists of 46 scenes.

The scenes do not appear in chronological order, unlike in traditional plays, Erica Steinhagen ‘99, the play’s lead actress, said.

“It’s not what we’re used to as Western audiences, truly,” she said. “It challenges us as audience members to really watch a play in a different way and be really open to nonlinear storytelling.”

Partway through the production process, Stanescu reordered many of the scenes. Several scenes are also meant to be taking place at the same time.

“If you’ve seen the movie ‘Memento,’ it has a flavor of that in there,” Herzog said. “There’s these two characters in the story, and throughout the play, both the characters and the audience are trying to solve the problem of understanding their own relationship. They’re trying to figure out what is truth and what is fiction when their memories are playing tricks on them.”

Director Samuel Buggeln said that while the characters attempt to find truth, the audience does the same to connect seemingly separate events to try and find a consistent narrative.

These themes of change and progress are reflected in the play through its focus on technology and incorporation of video. In one scene, one character is on stage while the other is on a video stream.

“I think theater needs to align itself to the new technological progress . . . We are multitasking constantly — things happen at the same time,” Stanescu said. “I like the idea [that] in theater we need to challenge the idea of traditional storyline and work with multiple realities.”

As well as producing original work, The Cherry Artspace will be hosting other theater companies, performances and events. On Sept. 11, it held a book launch party for Professor Eleanor Henderson to mark the beginning of her tour for her book “The Twelve–Mile Straight.” It will also work with organizations such as Opera Ithaca and Ithaca Underground to put on concerts.
“What Happens Next” runs Sept. 14–23. Tickets can be found at www.thecherry.org.