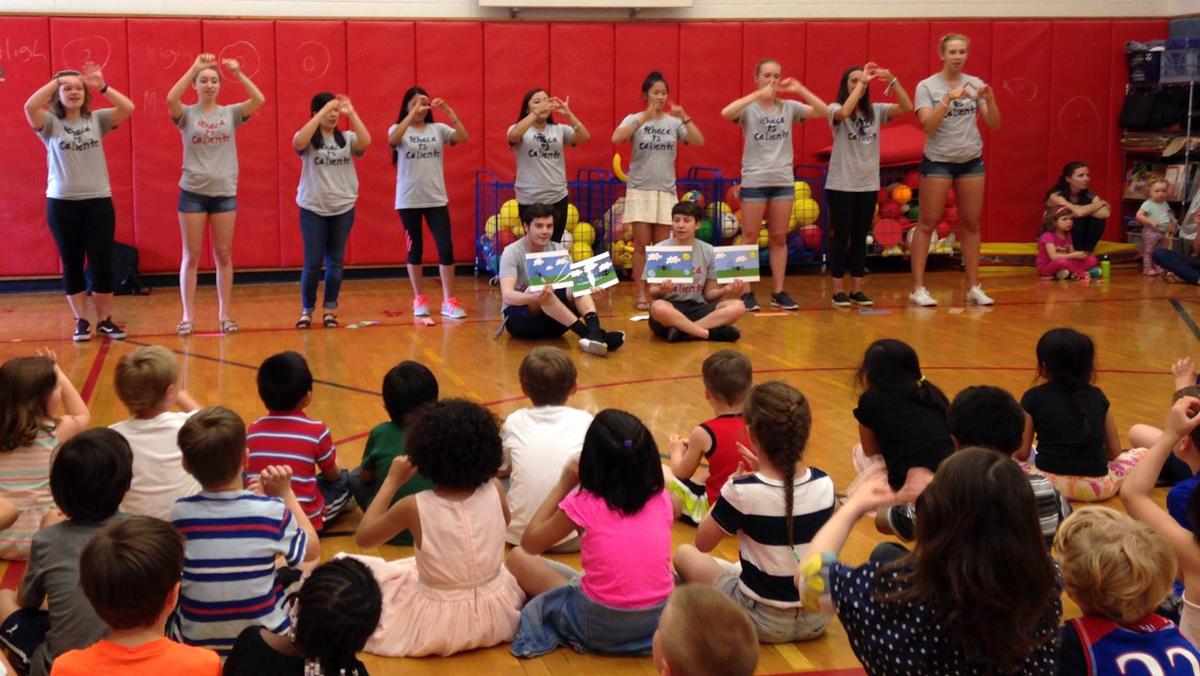 Courtesy of Annette Levine
SALTAR, Spanish Language through the Arts and Recreation, is a class that visits the Bell Sherman Elementary to integrate Spanish into the classroom through physical education, art and music.
By Vivian Goldstein — Contributing Writer
Published: March 28, 2018

From club-based organizations like Big Brothers/Big Sisters to Habitat for Humanity, it is not difficult to find community service opportunities on Ithaca College’s campus. The college also offers classes that engage with the larger Ithaca community.

There are 36 service learning–designated courses at Ithaca College. Of these, three of them — Understanding Disability: Characteristics, Causes, Services; SALTAR (Spanish Language through the Arts and Recreation); and Proposal and Grant Writing — can serve to provide a sense of how the courses work. All three integrate community interaction, specifically in Ithaca, into their curriculum.

David Harker, director for the Center of Civic Engagement, said more courses are on their way to having service learning designation. He said he hopes that continues so students who want to participate can gain critical thinking skills that community service provides.

Since it first began in 1982, Understanding Disability: Characteristics, Causes, Services has included interactions with the community. Along with the standard classroom lecture, it includes a swim program that gives students from the college hands-on experience with children with disabilities. Working in tandem with the Franziska Racker Center, a disabilities service and support organization, children are bussed to the college’s indoor pool to learn how to swim.

Joanie Groome, lecturer in the Department of Health Promotion and Physical Education, teaches the course and said she believes it is important to do more than just talk about people with disabilities.

Groome said she has noticed that people are timid when working with children who have disabilities because of stigmas surrounding disability. She said getting hands-on experience is the best way to overcome this.

Junior Madeleine Keppel, who took the course in Fall 2017, said the course helps socialize children and offers a sense of freedom they do not have elsewhere. Having a buddy take the first step makes children more comfortable joining in with activities, Keppel said.

“It’s a lot easier for them to get in the water with one of us than one of their parents,” Keppel said.

Another class at the college, SALTAR, works with children by sending pairs of students from the college to the Belle Sherman Elementary School to integrate Spanish into the classroom. After speaking to another teacher at Belle Sherman about the lack of language classes offered, Annette Levine, associate professor and Latin American studies coordinator in the Department of Modern Languages and Literatures, decided to get the college involved. She created the course and said using students from the college to teach Spanish in physical education, art and music classes seemed like a natural way to connect college students with the community.

Senior Rachel Benjamin said teaching almost solely in Spanish was difficult and required using physical cues and overemoting at first. Although it was challenging, she said it was worth it because at the end of the semester she got to watch her students perform a concert entirely in Spanish.

“It feels really rewarding to see how much of an impact you have on students … and to know it was you who taught them that,” Benjamin said.

Another class that interacts with the community is Proposal and Grant Writing, a lecture-based course that works with local nonprofit organizations to produce a grant catered to the organization’s specific needs. Anthony DiRenzo, professor in the Department of Writing, is one of the teachers of the course.

In Fall 2017, a group of students in the course produced a 60-page proposal for the Ithaca Health Alliance, a free clinic that provides counseling to reduce medical debt, holistic healthcare and affordable medication, to encourage local businesses to donate money in the form of a multiyear pledge. Norbert McCloskey, executive director of the Ithaca Health Alliance, said the proposal that the students worked on could have a major effect on the clinic.

This increase in donations would allow the clinic to sit down and plan out a budget to support the programs they run, like the ophthalmology clinic, free mammograms and their food pharmacy that offers fresh fruit and vegetables to chronic care patients.

Harker said helping others gives participants the ability to connect with the community they are living in.

“You get that great benefit of belonging and being a part of something,” he said.

Senior Madeline Henris took Proposal and Grant Writing in Fall 2017 and said she enjoyed the community service aspect but acknowledged that creating this proposal was not easy. By the end of the semester, Henris and her team turned in the cohesive proposal that McCloskey is trying to implement to attract businesses.

“We didn’t get paid and that doesn’t even matter,” Henris said. “That is the art of the nonprofit, is doing the work and … the reward out of it is bigger than just any wage.”

Both Groome and Levine said they hope to expand the impact and reach of their classes and continue building on these results. Levine said the growth of her program is dependent upon the number of students who enroll in the course. Students who choose to participate in SALTAR get a feeling on satisfaction once they look back on a completed semester, she said.

“It’s kind of addictive once you start,” Levine said.

Anthony Hopson is serving as the first assistant vice president of community government relations this year at Ithaca College. President Tom Rochon appointed Hopson to keep communication open among the college, community and the local government. He started last June. Hopson has previously served as an associate dean at the Massachusetts College of Pharmacy and…