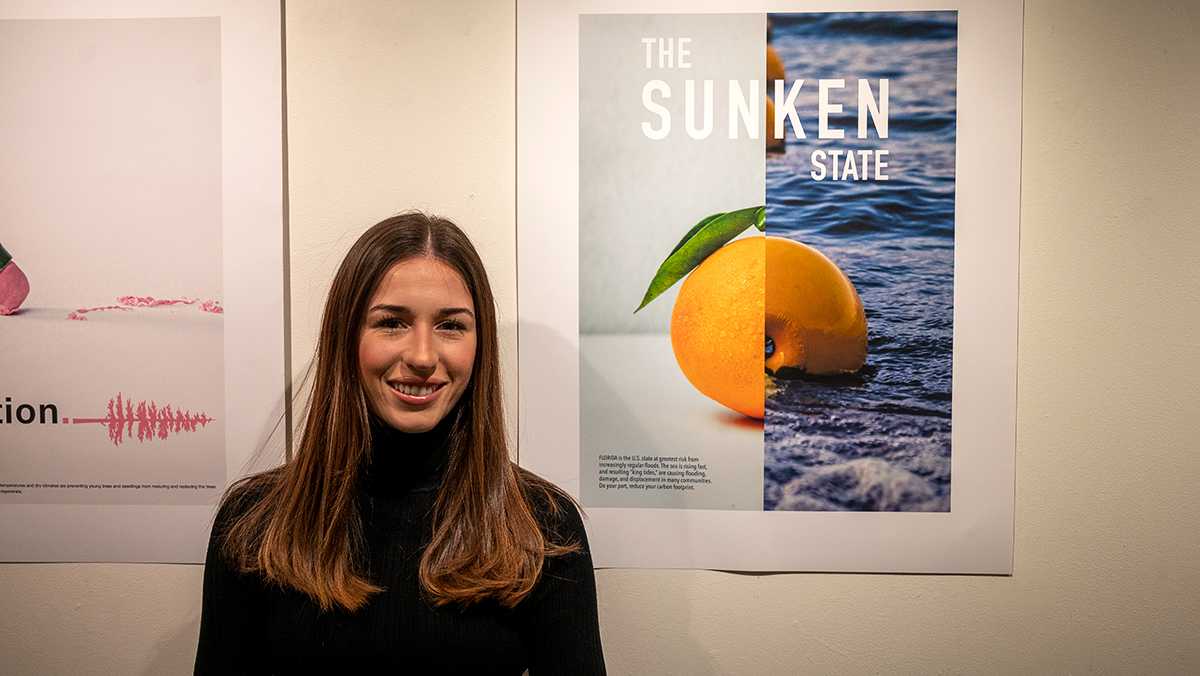 For the final project for her Graphic Design II classes, Patti Capaldi, assistant professor in the Department of Art, wanted to end the course with a project that would give students a chance to voice their opinions.

“It wasn’t just [about] global warming,” Capaldi said. “I wanted it to be more about extreme weather and the crisis of the climate.”

The results of this project were “the climate will determine the green of the future forests” exhibition, which is a set of graphic–design posters that feature raster- and vector-based imagery and abstract depictions of environmental issues created by Ithaca College students. The exhibition had its opening reception Feb. 11 at the Community School of Music and Arts and is open to the public until March 25. The work of 12 current students and alumni are all represented with their posters.

When Capaldi first introduced the project to the students, the 2021 United Nations Climate Change Conference was taking place in Glasgow, Scotland. Capaldi said none of the students knew what the conference was when she mentioned it.

“A few students in the beginning wanted to just recycle plastic,” Capaldi said. “You know, we’ve been seeing those posters about recycled plastic for 15 years … how do we make something feel fresh and new?”

Thacker said Capaldi was looking for students to use all of the knowledge that they had learned in Graphic Design II to make a poster that would push beyond the basic designs they were doing before.

“She really wanted us to try to use something physical,” Thacker said. “So either photos or other ways to manipulate things … more like stuff that we ourselves would create instead of just using the internet.”

Thacker said he wanted to discuss the environmental cost of even proposed green technology through his design. According to an article by Tech Evaluate, solar panels, electric cars and wind turbines still require materials that are not eco-friendly. For example, the use of natural resources like steel, lumber and coal has increased with more factories and production, leading to water and air pollution.

“I specifically wanted to go after something that was a little less talked about,” Thacker said. “Electric cars still require a lot of lithium that is taken from countries in the Global South that usually use either slave labor or pay terrible wages.”

Thacker said that in order to create his design, he printed out letters, cut them up and slowly burnt them. His poster features large letters saying “Wake up and smell the ashes,” with the bottom few words cut–off and falling to the bottom of the poster.

“It was challenging in the way that it was kind of the first graphic work I’ve done that is purely photography based,” Thacker said. “I had to design it digitally, and then translate that out.”

In seeing everybody else’s art in one show, Thacker said the student designers’ creations effectively complement one another.

“There’s really great work that covers a huge variety of different topics,” Thacker said. “All relating to climate, while also each being its own different thing.”

Capaldi said it was important for students to be up to date with the subject matter and make their work about what is happening with the climate now. For example, the World Meteorological Organization confirmed in December 2021 that the Arctic hit its record high temperature of 100.4 degrees Fahrenheit in June 2020.

“We tried to think about turning things around,” Capaldi said. “How can we have a little bit of hope … we didn’t want to be grotesque in our imagery.”

Senior environmental studies major Austin Zhang said his creation depicts oil rigs in different states across the United States, turning the rig into an insect through anthropomorphism to show how annoying and inconvenient they are. Zhang’s poster prominently features a large image of an oil rig with the definition of fracking written out along with the states California, Pennsylvania and Wyoming inscribed inside the oil rig.

“I’m really deeply rooted in environmental issues and problems and love talking about them,” Zhang said. “In the United States, [oil rigs] cause many problems like erosion. They pollute the water and destroy the land.”

Fracking is the process of drilling into the earth, putting wastewater into the ground and using explosives to get oil that is later used for natural gas, oil and petroleum.

“Exploiting the ground, you expect a lot of issues coming from it,” Zhang said. “That connects directly to my field of environmental studies, where I take a look at these problems, the pros and cons of them, and what environmental damage they caused. Essentially, I decided to convey that in this poster.”

Toledo said her origins in Florida gave her the inspiration to focus on rising sea levels in her poster. Her poster features an image of a Florida orange front and center with the title “The Sunken State.” One side of the poster has a plain background with the fruit while the other side depicts an orange object in a flood.

“There’s a lot of articles about Miami sinking, or that it’s going to be underwater soon,” Toledo said. “I’ve participated in beach cleanups, so I feel like I do value and focus on that issue specifically. … I wanted to highlight that instead of global warming in general. Making it more personal.”

Toledo said she made her poster depict the sunken state and applied it to the entirety of Florida in her creation.

“I didn’t want to make it so literal,” Toledo said. “You have to read the poster to figure out what it’s about … it’s more visual, like an editorial, magazine type of poster.”

Toledo said everybody’s posters in the class are very conceptual, relying on visuals rather than trying to catch the audience’s attention.

“The way they’re put together with the headline text, the layout … is what everyone was really challenged to do and really what puts the posters together,” Toledo said. “They were created very carefully with a lot of thought put into each element.”

Capaldi said she wanted the posters to represent a good cause and wanted her students to know that design can be a powerful force for change.

“It’s really a cross between how graphic design works with social and ethical issues,” Capaldi said. “You have an image that should really be powerful, should really draw the person, the viewer, in a little closer.”