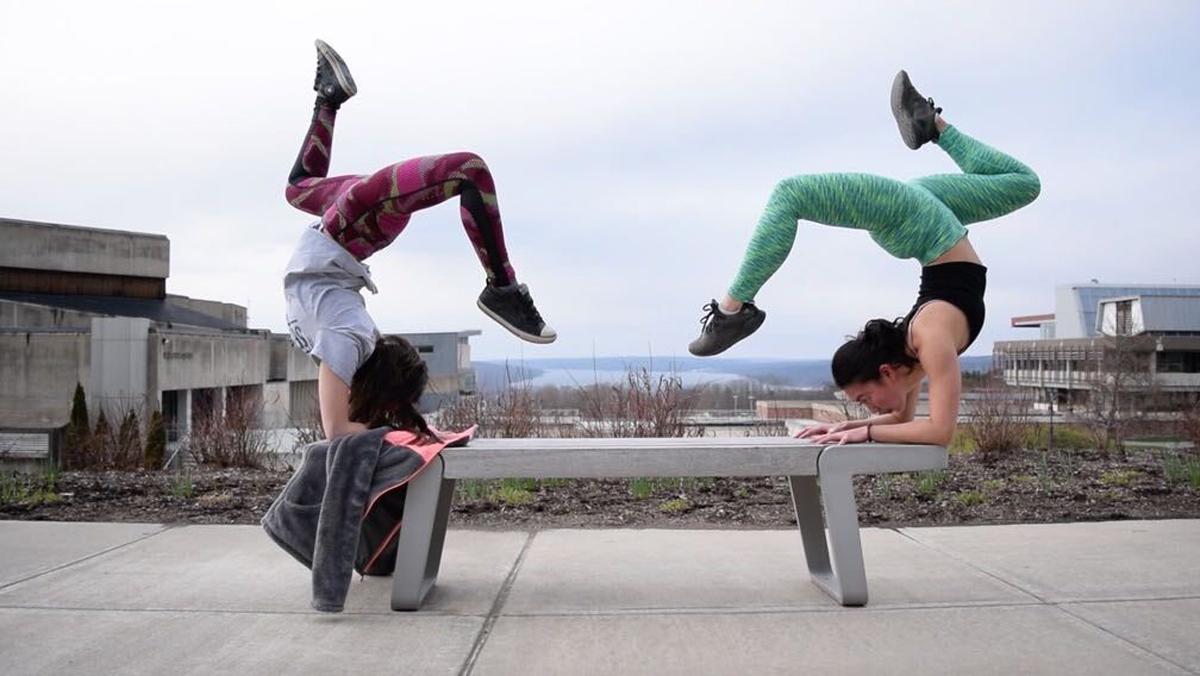 Courtesy of Mel Videto
From left Mel Videto '20 poses with Anne Qu '19 M.A. '20. Since going online, ICircus members have been practicing alone and recording videos of themselves for an online showcase.
By Antonio Ferme
Published: May 30, 2020

Although the COVID-19 pandemic halted campus life in March, some Ithaca College student organizations found new ways to keep students engaged for the remainder of the semester.

Mary Holland-Bavis, associate director for student involvement in the Office of Student Engagement, said that students were struggling to feel connected when they learned that classes shifted to remote instruction for the rest of the semester March 17.

“We’re a big programming campus,” Holland-Bavis said. “Our community loves to come together and showcase our great work. A lot of these organizations are feeling stuck because they were in a routine. Things were moving the way they were supposed to and it’s come to an abrupt halt.”

Over the last few months, many clubs have been able to refocus their efforts and connect with members online. For example, the Student Activities Board hosted a virtual quarantine comedy night, and the IC Bureau of Concerts posted album recommendations every Friday for the campus community to jam to while hanging out at home.

Rather than bringing film enthusiasts together on campus like it did earlier in the semester, the IC Film Society hosted weekly screenings via Zoom. Rising senior Eli Bernstein, a founder of the club, said this decision was made with his fellow board members, rising seniors Yeshim Kayim-Yanko, Jack Liden and Caroline Brophy. The virtual screenings allowed students to watch the same film together and use the Zoom chat feature to share their reactions in real-time.

“Without sacrificing video quality too much, we wanted this to be an online campus community substitute,” Bernstein said.

Kayim-Yanko said the club’s main goal is to present little-known independent or international art films to students. Liden and Brophy said they also used the club’s Instagram profile to keep students engaged by posting daily film recommendations. The posts usually include a short blurb about the film, noteworthy fun facts and which streaming services the film is available on.

Rising junior Ben Basem, a member of the club, said the transition to online was seamless.

“The Zoom screenings are so fun and intimate,” Basem said. “Discussions run even longer over Zoom, which I love, and it allowed me to be more involved in the club than I was in person.”

“Eventually, when brainstorming how to still deliver a meaningful night for our dancers while apart, we decided on a mini documentary that would premiere live on YouTube,” Swann said.

Swann stepped up as the director and editor of the documentary, titled “What Moves Us.” He said since the company had placed a large emphasis on video content, he was able to pull from hours of footage gathered over the year. Swann had one week to draft an outline, gather interviews from the company’s e-board and assemble the final film.

Michelle Venditto ’20, treasurer of Unbound and producer of the documentary, said the company’s goal was to create a full-fledged campaign. The accompanying fundraiser, Moving Together, launched alongside the premiere of the documentary and was able to generate an additional 81 donors for the Student Emergency Relief Fund for students affected by the pandemic.

“I think we were all surprised at how much the premiere day felt like a show day,” Swann said. “The whole day ended up being, while incredibly different, a really beautiful moment of celebration and closure for the company.”

ICircus is a collegiate performance club that would usually meet twice a week in the Fitness Center to practice new acrobatic skills and showcase them at the end of the semester. Mel Videto ’20, co-president of the club, said it was disappointing when ICircus’ end-of-the-year show was canceled due to the pandemic.

“We have a fair amount of seniors that are graduating this year, including myself,” Videto said. “I was upset to not be able to have a senior showcase, where we could show everything that we’ve learned in our past four years here.”

Videto said she asked members to send clips of new tricks they have been practicing in isolation to create a virtual showcase. Rising junior Liam Wurtz, co-president of the club, will be editing all the segments into a video that the club will post on social media.

“We just wanted to have some sort of alternatives to these cancellations just to keep the club members in touch with each other and give everyone a chance to show off what they’ve been practicing,” Wurtz said.

Holland-Bavis said there were approximately 200 virtual events through the end of the semester, which brought in thousands of attendees. She said she is impressed by how creative these student leaders have been and encourages students to stay engaged.

“From the organizations that I’ve seen still meeting and functioning, it serves as a reminder of why you’re in it in the first place and gives you purpose outside of the academic experience,” Holland-Bavis said.