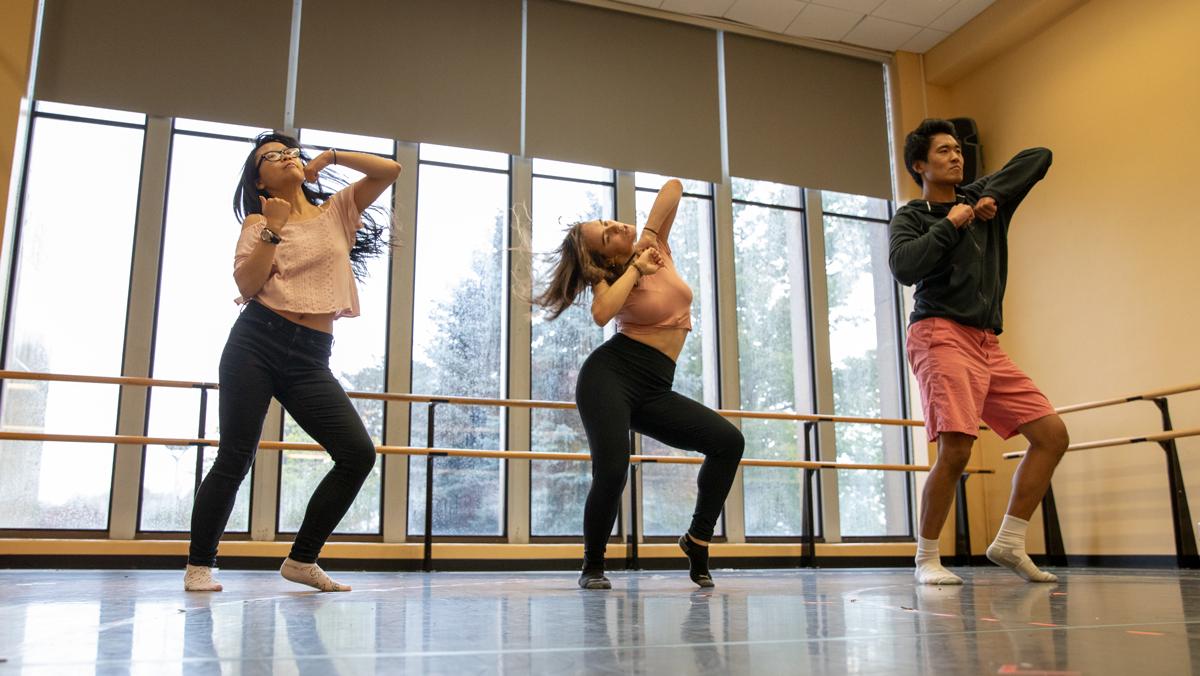 Inside a room in Friends Hall, the music video of K-pop girl group BLACKPINK’s song “Whistle” plays on the projector. The scenes rapidly shift from a girl sitting on a CGI revolving planet — then a bike — to four members dancing together in front of a pink background, singing and rapping in Korean over a hip-hop beat. A music video kicks off every meeting of the Ithaca College K-pop Club. The club, known as ICKC, is dedicated to “K-pop,” a broad genre term defining popular Korean music.

“K-pop is so much more than just Korean pop music,” Kate Dotten, sophomore and ICKC secretary, said. “There are a bunch of genres infused in K-pop. There is R&B, hip-hop and rap. It’s not just strictly K-pop music.”

Especially after the hit song “Gangnam Style” by Psy went viral in 2012, the K-pop genre has grown in popularity in Western countries. Earlier this year, one of the most popular K-pop boy bands, BTS — which stands for Beyond The Scene in English and Bangtan Sonyeondan in Korean — sold out New York’s Citi Field Stadium in under 20 minutes for its upcoming show on Oct. 6. In the past two years, the band won Top Social Artist at Billboard Music Awards and reached  No. 1 in the Billboard’s charts with two of its albums “Love Yourself: Tear” and “Love Yourself: Answer.”

The love for K-Pop is not only growing in the United States, but it’s also growing at Ithaca College. This semester, the campus’s first K-pop dance team, Katalyst, formed and held auditions Sept. 22 and 28. One of the most iconic aspects of K-pop are the dances that the idols perform, and Katalyst will recreate and perform the dances. There are specific dance moves that become a trademark of a group’s or solo artist’s song. In the case of K-pop singer Sunmi’s song “Gashina,” the finger gun move during the chorus is the song’s highlight.

The process to become a K-pop star, or “idol,” is perhaps the most unique aspect of the music genre. In South Korea, those who dream of becoming singers or dancers audition to join an entertainment company that houses and trains them. The three most popular companies are known as the “Big Three,” since they debut the most popular and profitable K-pop artists. Soon-to-be idols train for years in order to perfect their singing and dancing skills because music groups must not only sing but also perform difficult choreographies. A company decides who gets to debut in a group or as a solo artist. Groups can include over 10 members. After debuting, artists are under contracts that restrict them from anything that might ruin their reputation — like dating and driving.

Idols usually keep their relationships a secret in order to avoid press coverage and, most importantly, fan backlash. Recently, two famous K-pop idols from the same entertainment company, HyunA and E’Dawn, revealed their relationship status to the public. Going against their company’s orders, HyunA and E’Dawn were removed from their label. The label retracted its statement after the company’s stocks declined.

Dotten said she doesn’t agree with these restrictions, but she still continues to listen to the bands despite them.

“It doesn’t affect me wanting to listen to them because I don’t judge a band by their members and their companies,” Dotten said. “I still appreciate all the work that goes into such groups’ concepts, but it does make me feel more sorry because the companies are so strict about what idols can or cannot do.”

Although many fans of K-pop don’t speak Korean, they said they connect with artists by looking up translations for each song.

“The bands that I listen to help write and produce much of their own music,” Dotten said. “I appreciate the work they put into the albums, so of course I want to read what they are saying. Not knowing what they are saying at first gives a song a bit of a different outlook. You just hear their voice, and you can convey what they are trying to say to an audience through their voice and tone.”

Angela Chen, freshman and member of ICKC, said her love for K-pop began through the band BTS.

“BTS dragged me into K-pop,” Chen said. “BTS didn’t have a strong background. They did not have a lot of resources since they came from a small company and barely had any money. Still, the band worked hard to make their dreams come true. I want to be like BTS, working hard to achieve my goals.” 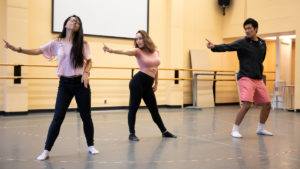 “We both really wanted to perform K-pop dances since arriving on campus, but Julia was very persistent about it,” Chen said. “She wanted to get a team started but had difficulties getting people together, so she came to me. There were some hesitations if this was going to happen, but we just went in together.”

Chen and Cohen chose the name Katalyst for the group because it signifies the beginning of something new.

“We came up with the name Katalyst with a ‘K’ for K-pop because this team started with a spark, and we want to pass it on to our group members, and then as we perform, it will spark other people’s interest,” Chen said.

Cohen said she wants the club to spread awareness about the K-pop dance style.

“I feel that there’s not a big presence on campus in particular of K-pop dance fans,” Cohen said. “In the past few years, it’s become popular to have K-pop dance groups, so starting one on campus was an exciting idea. We will be showcasing several dances at a time. We will have different group members show off dances.”

James Yoon, graduate student and secretary of Katalyst, said the club’s goal is to share the member’s passion for K-pop.

“We want to perform at a collaborative or fellow venue possibly on campus or off campus,” Yoon said. “We want to display our skills as an organization’s members. As previously stated, we want to spread the love for K-pop. We love K-pop and want to share this passion through dancing.”

Although the music is Korean, fans of the club represent various nationalities and identities. Members discuss songs and music videos by their favorite K-pop artists and delve into Korean culture by having dinner at Koko’s, a Korean restaurant downtown. Last year, the club held movie nights every other Friday and watched Korean films such as “Train to Busan” and “Midnight Runners.”

Because K-pop has become so popular in Western countries, some fans have been criticized for fetishizing Korean men because of the popularity of Korean male idols.

“You shouldn’t judge people on one really attractive Korean man you see, especially idols whose job is to look the best that they can be,” Dotten said.

Dotten said the club wants to host larger events in the future. She said last year, the club had difficulty receiving funding because it included only eight people, which was too small to fund. She said the club has grown since then and plans to host other events.

“This year, there are so many more people who’ve joined so late into the semester, we want to try holding larger events,” she said.

Sophomore Yeshim Kayim-Yanko said she was able to find other people who shared an interest in K-pop as deep as hers by joining ICKC.

“I had a couple of friends who were interested in K-pop, but I hadn’t really known anyone who really knew a lot about it,” she said. “I thought it would be fun to join this club and find people who knew as much as me.”

Dotten said ICKC wants to move forward by educating members on the history on K-pop and the origins of K-pop and entertainment companies in particular.

“I think the term K-pop is a term that is very generalized,” Dotten said. “When people think of K-pop, they think of idol groups, ‘look at those handsome and beautiful faces.’ People don’t really think of the music. They think about the industrial aspect of K-pop.”

Chen, who is from China, said K-pop comforted her when she was going through the process of becoming an international student in America.

“Last year, BTS lyrics supported me,” she said. “I was applying to colleges in America, and that was a lot of pressure. I kind of lost myself during the process. Hearing BTS’s song ‘Path’ and reading the translations, I was able to find myself in their lyrics and feelings.”

Kayim-Yanko said her passion for film led her to K-pop. She was drawn to the quality and aesthetics in K-pop artists’ music videos. K-pop music videos contain multiple scene shifts, and audiences see facial expressions and close shots of the artists singing and dancing. Color schemes and props are vibrant and match a specific concept of the video — during a scene from BLACKPINK’s “Ddu-Du Ddu-Du” music video, the main rapper sits on top of a bedazzled military tank.

“I’m a film major, and what really drew me into K-pop were the incredible music videos with really good production value,” Kayim-Yanko said. “The music pulled me in, but the videos made me stay.”

Dotten said K-Pop music videos are different from American music videos, which is one of the many aspects that make K-Pop so interesting to Western audiences.

“For some people, K-pop can be refreshing and new,” she said. “It can be something people find fascinating.”