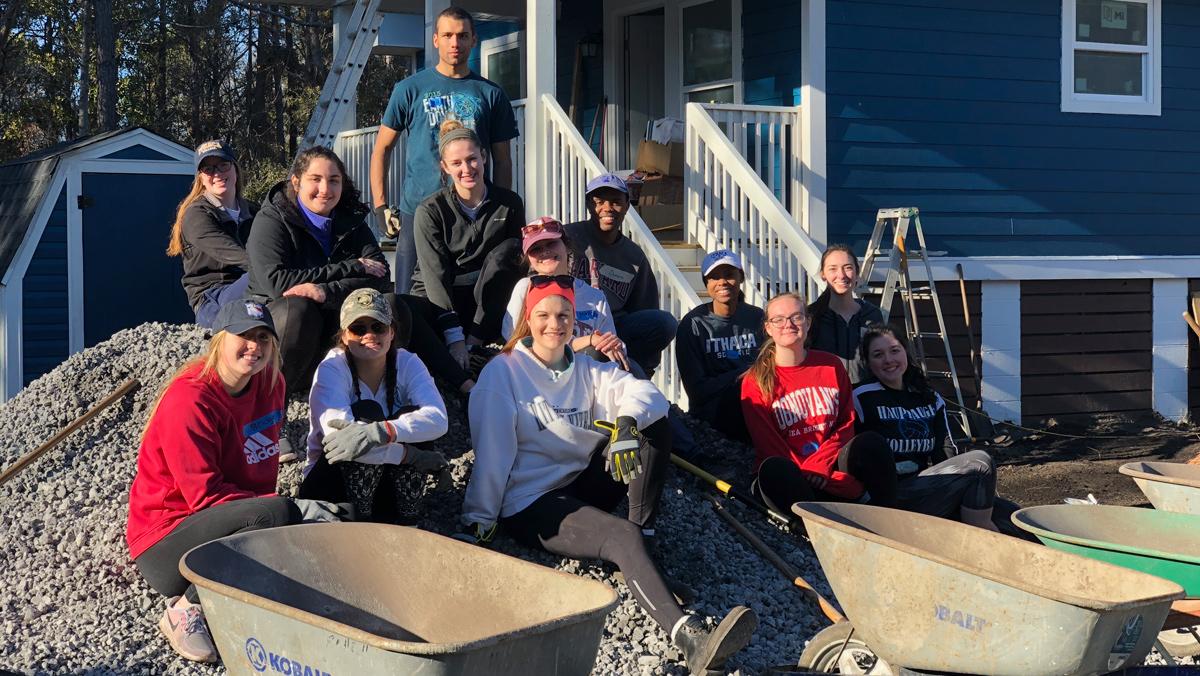 Courtesy of Gabby Picca
The Ithaca College Habitat for Humanity club traveled to South Carolina Jan. 15-19 to partner with the East Cooper affiliates for Habitat to finish building a house for a single mother and her daughter.
By Sierra Guardiola — Life and Culture Editor
Published: January 30, 2018

After the drive through five states and a 16-hour car ride, the Ithaca College Habitat for Humanity club arrived in East Cooper, South Carolina, to begin a weeklong house–building project Jan. 15–19.

The club spent the final week of winter break partnering with East Cooper affiliates for Habitat for Humanity, a global organization that works to provide people with decent and affordable places to live. They helped finish building a house in a Habitat community that currently consists of five houses, all built by the organization. The house was built for a single mother and her daughter.

Each winter break, the club chooses an affiliate to partner with and travels to the affiliate’s location to work on a build through the Collegiate Challenge, which provides housing for the club during builds. Originally, the club wanted to go to communities heavily impacted by either hurricanes Harvey, Irma or Maria, but the travel time to places like Florida would reduce the time the club would be able to work by two days.

Instead, the club voted to go down to South Carolina like it it did last year, Gabby Picca, co-president, said. The trip to Durham, South Carolina, last year gave Picca the “Habitat bug,” which she said people often experience after they go on their first trip.

When the group members arrived in East Cooper, they found out that the house they were going to work on had already been built by other Habitat groups and that they would be the ones doing the finishing touches before the house was revealed to the family.

Junior Stephon Sepulveda went on the trip after hearing about it in a Facebook post. He said he was surprised when the East Cooper affiliates told them would be landscaping and painting rather than building the house.

“I had expected to start the house from scratch, not to finish it, but I’m really grateful that we got to finish it because we got to meet the family and we got to see their reaction,” Sepulveda said. “I think it’s the small things that matter the most rather than building the actual house.” 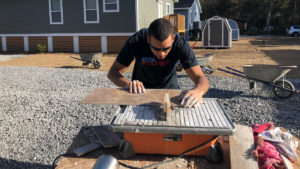 Junior Stephon Sepulveda decided to go on the trip after he saw a post on Facebook looking for volunteers. (Courtesy of Gabby Picca)

The 13 students who went on the trip spent the majority of their time painting the inside and outside of the house and landscaping the yard. The students met with the East Cooper affiliates on the first day of the trip to get to know one another. The students also met the family that the house was being built for.

The group worked each day from 8:30 a.m. until 4:30 p.m. with an hour break for lunch. Sophomore member Christina Cuzzi said it was rewarding to come back each day and see the progress being made toward completing the final product.

“We worked hard all together as a team,” Cuzzi said. “It was incredible that with less than 20 people, we were completing a lot of work each day.”

Events Coordinator Dwayne Moore said that although the work was tiring, it was important for each person to push themselves and remember that their work would eventually pay off by the family’s having a place to live. 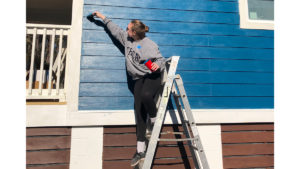 Freshman Mari Timney helped to paint the outside of the house in East Cooper, South Carolina. (Courtesy of Gabby Picca)

“You could see the transformation that it was really becoming a home,” Moore said.

The group’s last workday was Jan. 18, two days before the unveiling of the house. The group showed up half an hour early Jan. 18 to get in the most work it could, Picca said. She said the group was always ready to work hard, with Sepulveda even working through his lunch.

“After seeing the family and learning that the house was almost done, I felt even more compelled to get the job done,” Sepulveda said. “I wanted to leave South Carolina knowing I put in all my effort and that the family had a new place to call home.”

The dedication ceremony for the family was held Jan. 20, but the club members could not attend because they had to travel back for the beginning of the semester. Although the club members were not at the ceremony, the East Cooper affiliates were able to send them a video of the family seeing the house. Freshman Jackie Marusiak said it was gratifying to see the reaction of the mom and her daughter when they saw the house.

“The daughter had specifically picked out the colors for the house,” Marusiak said. “When she got to see it, she was crying, and it was really heartwarming.”

The club plans to continue its weekend builds in Ithaca this semester and volunteer at the Ithaca Children’s Garden Fire and Ice Festival on Feb. 3, Picca said. The club also just completed its Row for Humanity, for which members of the crew teams took shifts rowing to raise money for Habitat for Humanity. A portion of the money raised is donated to the club.

Picca said that even though the group was small, its passion drove it to work hard to complete the house.

“You can have a large group of people and get the same amount of work done as a small group of passionate people,” Picca said.

Crew teams row for Habitat for Humanity in annual fundraiser

Pam Lavigne said she never tried to picture her dream house. But on Saturday, Lavigne came face to face with the next best thing: a house she helped design, that also fit her needs as a single parent. “It’s so much more than I ever could have imagined,” Lavigne said. The house, located on East…

Ithaca College’s Habitat for Humanity built two sheds on the Campus Center Quad Saturday to raise awareness for their organization.