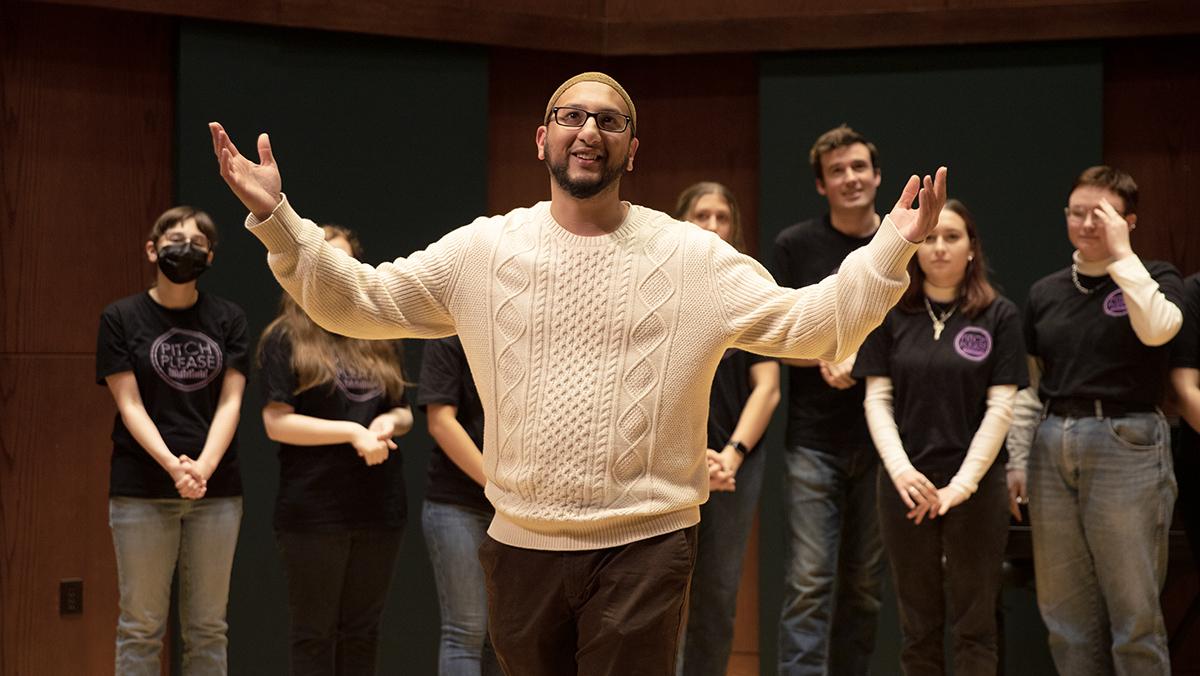 At the Hockett Family Recital Hall in the James J. Whalen Center for Music at Ithaca College, several of the college’s voices and talents got together to liven the hall of about 50 people with songs of praise and worship. The concert was part of an interfaith celebration of life during an evening of spiritual performance and community building.

Hosted by the Office of Religious and Spiritual Life, the Spirit of IC concert brought together many spiritual performance groups for the first time Dec. 1 to highlight spiritual diversity across the college. The concert featured vocal performances by Lighthouse Christian Fellowship, Amani Gospel Singers, Pitch Please and Cantor Abbe Lyons, as well as a violin performance by sophomores Lily Milkis and Nadav Berkman and junior Joel Staub.

Yasin Ahmed, director for the Office of Religious and Spiritual Life, said this was the college’s first time holding a concert specifically dedicated to spirituality and diversity. 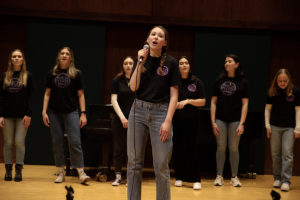 Sophomore Katie Miller leads Pitch Please in a cover of “Running up That Hill” during the concert Dec. 1. Kalysta Donaghy-Robinson/The Ithacan

“Our community is amazing,” Ahmed said. “I felt like we wanted to have community gatherings that [were] positive because I just wanted to create a new space where we come together and specifically we get performers from all different types of genres, all different walks of life, and put them together just to highlight the diversity and the talent within the Ithaca College community.”

The goal of the concert, Ahmed said, was to help foster a sense of community as the academic year comes to a close.

“I really want to make sure that we gather on a positive note to close the semester,” Ahmed said. “And so this was just a dream come true. Just seeing so many different voices being celebrated in the IC community. This was the perfect start and foundation and hopefully next year we’ll be able to get even more people and more voices into the mix.”

Lyons performed a small part of a poem called Tzur Menati, which Lyons said translates to ‘rock of my existence.’ The poem was originally written by Shalom Shabazi, a 17th-century Yemenite Jewish poet. Lyons said she chose to participate in the event in order to share more Jewish music and culture beyond Ashkenazi Jewish culture. According to the Pew Research Center, in 2020, 5.8 million adults identified as Jewish. Ashkenazi Jewish people make up a large part of the population, with two-thirds of Jewish people in the U.S. identifying as Ashkenazi. The college also has a large Jewish population with over 1,000 Jewish students, according to Hillel at Ithaca College’s Spring 2020 Annual Report. 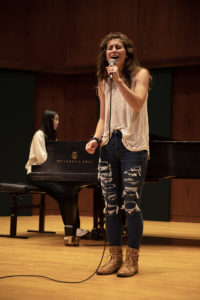 “There are so many other threads in the Jewish tapestry with beautiful, beautiful music and culture and traditions,” Lyons said. “And so I have a personal commitment to be more inclusive in the music that I share.”

Lyons said she learned the song from Shlomit Levi, a Yemenite Jewish singer who released a version of the song in 2013. The piece starts off slow but picks up in tempo. Lyons said Tzur Menati encompasses love, gratitude and the joy of living. In terms of music, Lyons said it has the power to bring people together, something she hopes further events will bring.

“In terms of music, [it] can really help us access things,” Lyons said. “On so many levels it can be uplifting, can make you feel heard, and so many different things. And that’s a wonderful thing, both for individuals experiencing it and also for building community.”

Sophomore Cami Weldon said this was her first time performing with Lighthouse as part of a larger interfaith event, which was something Weldon said she was looking forward to. Lighthouse offers Evensong, a weekly student-led worship service filled with song and worship every Wednesday.

“We’ve just been wanting to get more events,” Weldon said. “Not just with the music of different religions and cultures and backgrounds and everything, but also with other events to just educate people who want to know more or are interested in knowing more about different religious and cultural backgrounds.”

Senior Caroline Peyron, who also performed with Lighthouse, similarly said she was looking forward to holding more interfaith events to encourage the campus community to become more involved with the spiritual life on campus.

“I think there’s a little less participation in spiritual life than there used to be, at least from my experience,” Peyron said. “I hope this becomes a tradition because hopefully, it’ll introduce people to more faith-based groups.” 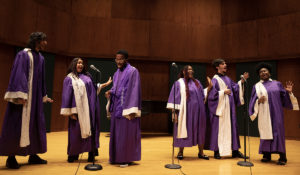 While Spirit of IC is only starting out for the first time this academic year, Ahmed said he has hope that there would be more events like the concert in the future that can help facilitate more diversity and connect a larger part of the community with one another.

“I think it’s really important that our relationships aren’t transactional,” Ahmed said. “And I think just building an organic community where … I see the beauty in you and we all see the beauty in each other is something that we got to keep cultivating.”