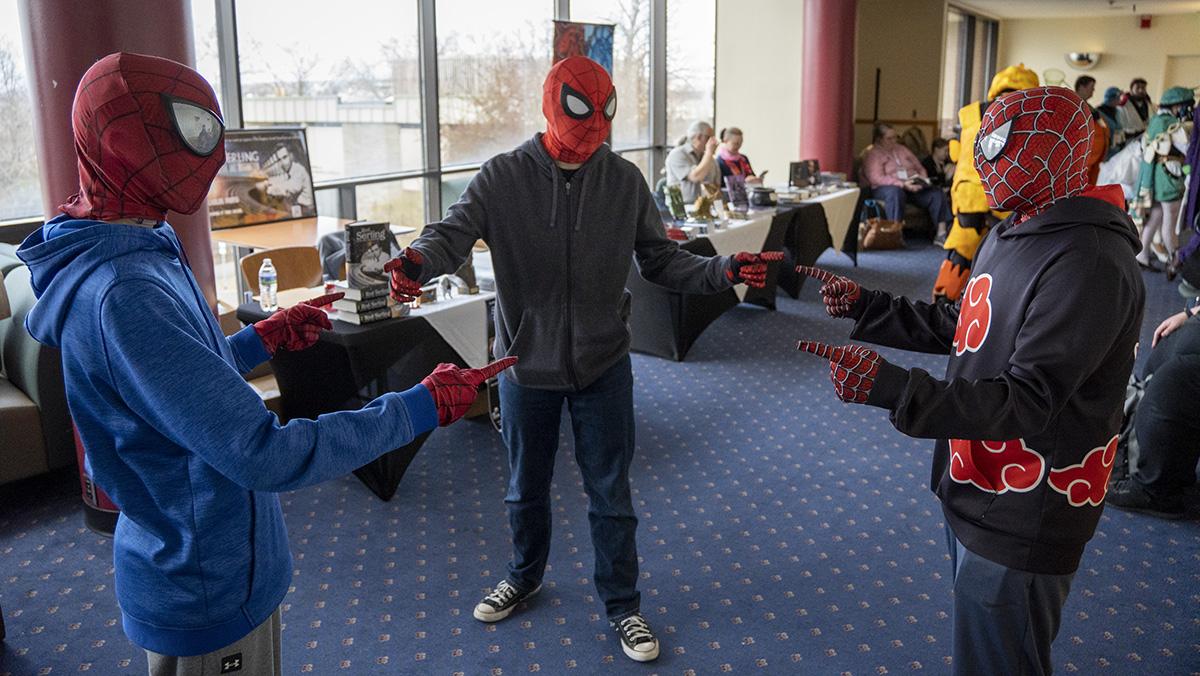 The lights dim and spotlights are on the front of the Emerson Suites. As the song “Party Rock Anthem” by LMFAO starts to play, three boys, all wearing Spider-Man costumes, walk across the floor, kicking off the Ithacon Cosplay Runway. Following the boys is a family that cosplayed as the characters from “Danny Phantom” and Chica the chicken from “Five Nights of Freddys,” along with many other DC and Marvel characters.

Cosplayers, artists and comic book enthusiasts from across the country joined forces from April 23 to 24 to celebrate the 45th Anniversary of Ithacon with the help of the Comic Book Club of Ithaca College and the Ithacon staff. Ithacon is a two-day annual comic book convention that was created by the The Comic Book Club of Ithaca, which is the longest-running comic book club in the country. The club first started as a middle-school comic book club, which eventually grew and was formally established as a community organization in 1975. The first Ithacon took place in 1976 and featured only two guests. Even though the show has grown considerably since then, the goal has always been to run a convention that is fun for fans, guests and vendors alike.

Throughout the day, students wearing red shirts with the Ithacon logos spent several hours selling tickets, hosting panels, directing guests and assisting wherever help was needed. However, this work was not voluntary but part of a class titled ITHACON: Promoting and Managing Conventions. This class is taught by Ed Catto, instructor in the Department of Management, and allows students from all majors to gain hands-on experience by building the annual comic convention. This class allows students from all majors to promote, manage, analyze and run the convention from the ground up.

Catto said the work students do in his class mimics how major convention companies run.

“We run a show that’s highly professional, so the demands are high,” Catto said. “All the work that students have been doing is surprising and it’s also very rewarding.”

Tickets for adults were $20 for both days, while tickets for students and faculty were only $10 for both days. In addition, tickets for children ages 7–12 were $5, while children 6 years old and under were allowed free admission. All attendees that purchased tickets prior to April 20 were awarded a “swag bag,” which included free comics and stickers.

This was the first time in two years that Ithacon was held in person. Ithacon 2020 was canceled due to COVID-19, and Ithacon 2021 was held via Zoom. Catto said that even though last year’s Ithacon was held over Zoom, there was still a great turnout because of how passionate people are about comic book conventions.

“We had a huge reach beyond people who could physically come and a lot of the fans really wanted to experience the conversations and activities that we had,” Catto said.

Fantasy Comics is a small comic book retailer based in Albany, New York. It is owned by comic book enthusiast Brett Putnam. Putnam said he has been going to Ithacon since 1982 and said it is nice to be back and see everyone after a year off.

“I’m reconnecting with my old friend Bill Turner, who is the original organizer of the show, and he and I go way back to the ’70s,” Putnam said. “That’s the most special thing, but it’s been a great show with lots of good guests and lots of different vendors.”

The convention took place in different areas of the Campus Center. Both Klingenstein and Clarke lounges held panels where comic book writers and editors spoke about their careers and gave advice about the comic book industry.

Don Simpson is best known as the creator of the super hero series “Megaton Man” for Kitchen Sink Press and Image Comics. In addition, Simpson has worked for every major comic book imprint in the late twentieth century, including Mirage Studios, Images Comics and Fantagraphics. In a panel moderated by junior Joshua Rothbaum, Simpson said it took a while for him to find his own style, but he was influenced by Marvel Comics and artists like Gil Kane and Jack Kirby when he entered high school.

“I was trying to master all these techniques and find my own voice as a young person,” Simpson said.

The convention welcomed back Will Dennis ’89 as Ithacon’s guest of honor. Since graduating from Ithaca College, Dennis has served as a group editor for Warner Bros.’ DC Vertigo division and, over the years, has edited some of its most acclaimed titles, including “100 Bullets,” “Scalped,” “Joker,” “Before Watchmen” and many more. In a panel moderated by junior Nick Lapinig, Dennis spoke about his career and what it is like to be back at the college for Ithacon.

“It’s nice to go to Ithacon because it’s smaller and it’s more about comics,” Dennis said. “I’m used to going to lots of big shows in San Diego and Chicago. So, it’s kind of fun to go to a small show and being an Ithaca native allows for a nice combination of a trip to see family that still live here.”

Junior Jacob Shelley and Rothbaum hosted a panel called “Geek Movie Music” in which they spoke about their favorite cinematic soundtracks and the influence music has on a superhero’s presence and character development. Shelley said the reason he elected to do this panel is because he said he is a fan of how music correlates with some of his favorite superhero films.

“It really gives them everything that we love about them,” Shelley said. “And to be able to have that paired with a motion picture in the effects that we have today is something truly remarkable. I’m glad to be alive and in a time where we are able to watch all these blockbuster movies and have such great soundtracks to go along with them.”

In the Ithaca Falls and Taughannock Falls rooms, children participated in multiple activities, including button making, comic drawing and other arts and crafts. In addition, kids were able to build their own lightsaber using foam rollers.

All of the main action took place in the Emerson Suites. The room was filled wall-to-wall with vendors selling items from old school Marvel and DC comics to wands and potions from the Craft Fox and special edition Pokémon cards.

At noon, Ithacon staff told people to make a pathway for the highly anticipated Cosplay Runway. Presented by DJ Tori Vee from Washburn Entertainment, the Cosplay Runaway is a non-competitive event where cosplayers can strut across Emerson Suites, showing off their costumes. Cosplayers were allowed to walk alone or in a group.

Vee said her favorite part about hosting the Cosplay Runaway is seeing all of the creativity behind everyones costumes.

“This has grown so much,” Vee said. ”There’s so many more vendors and so much cooler stuff. So it’s awesome to see it grow over the years.”