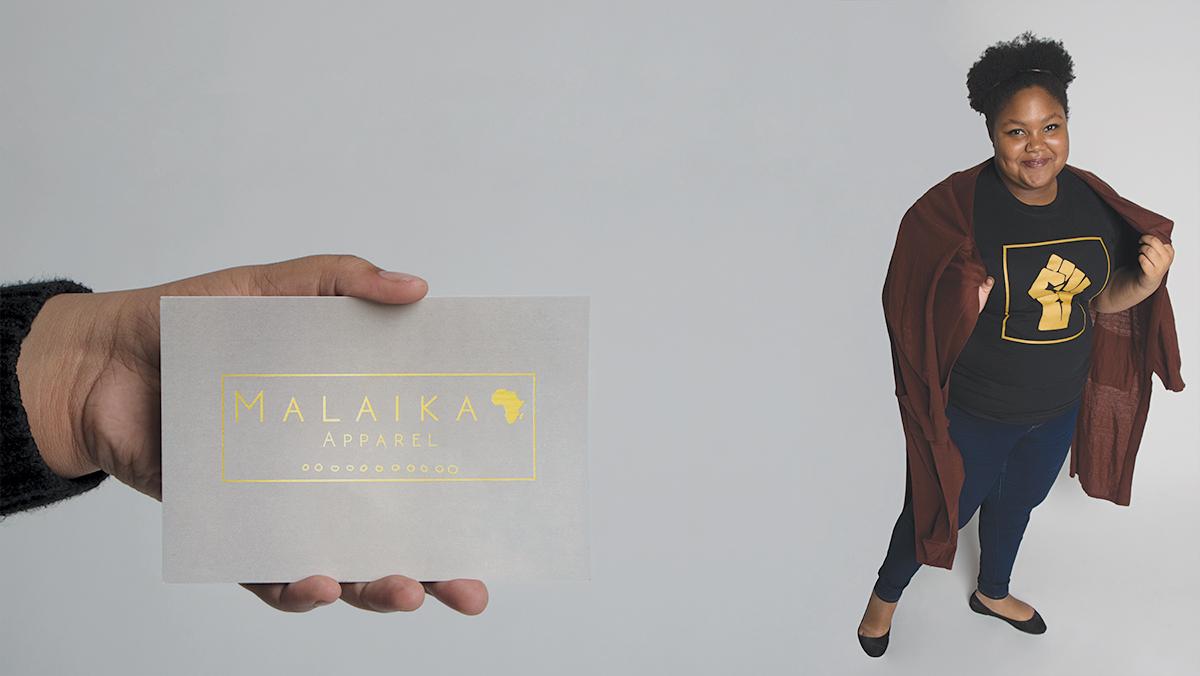 Photo illustration by Yana Mazurkevich
Rita Bunatal models Malaika Apparel, a Pan-African clothing line she developed to empower people of color and bridge the gap between Africans and those in the diaspora.
By Angela Weldon — Staff Writer
Published: November 11, 2015

On a black background, a raised fist appears in glimmering, metallic screen printing. Wearers of this design proudly show off this symbol of solidarity and support for Black Power.

This print is the first item for sale by Malaika Apparel, a Pan-African clothing brand started by Ithaca College senior Rita Bunatal.

Bunatal developed Malaika Apparel to deliver a message of empowerment for people of color and bridge the gap between Africans and those in the diaspora. Akwaaba, Malaika Apparel’s first line, was launched online at 8:30 p.m. Nov. 4.

Bunatal’s company functions as both an apparel brand and a form of social justice. This first line of Malaika Apparel seeks to welcome customers across a spectrum of identities into the clothing and Malaika’s message. The brand promotes a sense of intersectionality, the study of the overlap of different social identities in relation to systems of oppression.

“I want it to be a brand focusing on the upliftment of color, of plus-sized people of color, of intersectionalities, gender,” Bunatal said.

Junior Taranjit Singh, a friend of Bunatal who helps with the logistics of Malaika Apparel, explained the brand’s significance for the campus and world at large.

“It’s a symbolic representation of the struggles that are happening here on campus as well as across the globe,” Singh said. “This is a way we can express our ideologies without really speaking to it, and in a larger sense that means a collective identity of empowerment while speaking to the racialization of this campus and abroad.”

In Swahili, the language of Bunatal’s father, “malaika” means “angel.” In her mother’s language, Twi, a dialect of Akan, “akwaaba” means “welcome.” After Bunatal tried countless names and brand designs, she ultimately came upon these two words, which she said embodied her and her message.

Bunatal said this clothing line is a testament to her parents, who have encouraged her to achieve and experience more than they were able to. Bunatal is a first-generation college student for her family. Her Ghanaian mother and Kenyan father raised her in Dallas, Texas. Bunatal moved to Ghana in 2008.

After experiencing both American and African culture, Bunatal said she noticed the inconsistencies in the portrayal of people of color.

“Having parents from Ghana and Kenya and coming here, I saw a lot of misrepresentations of Africa in the media,” Bunatal said. “I realized that what I saw on TV was not the reality. It’s only giving one side of the story, and that irritated me.”

Upon coming to the college in 2012, Bunatal joined the African Students Association and became involved with the issue of black representation in the media. Noticing these misrepresentations, Bunatal was prompted to effect change and to tell the whole story.

“That was an inspiration: correcting, creating another outlet for other narratives to be heard,” Bunatal said.

Malaika Apparel started last spring when Bunatal, who has also been interested in graphic design, began to reevaluate what career she would like to pursue after graduation.

“I like designing, and I like reading about race,” Bunatal said. “So how do I make that come together?”

Her designs, which were often inspired by events of racial injustice, began to focus on black power and solidarity. After creating her designs in Photoshop, Bunatal did extensive research while starting up her company, weighing costs and sorting out logistics. She reached out to several black business owners for guidance.

Bunatal designed her way out of the anger, fear and sadness stemming from cases and events involving the Black Lives Matter movement and used those reactions to drive solidarity within the movement.

“In a way, the designs were my reaction. When those things happen, I’m usually quiet. I have a lot of things to say, but I don’t know how to say it. I think the easiest way for me was to design it,” she said.

Bunatal said she is challenging norms with this company. For her brand, Bunatal uses solely models of color as well as plus-sized models. As she seeks to change the representation of people of color in the media, Singh said Bunatal is breaking racial, gender and heteronormative barriers. Bunatal said she hopes to provide affirmative examples of body positivity and to change misrepresentations of natural black hair and other issues affecting people of color in the media.

“She’s breaking that racial boundary as well as that gender boundary, which is not largely discussed or seen,” Singh said. “For her to speak out about body positivity and plus sizes is a more powerful part of this.”

On Malaika Apparel’s website, each article of clothing for sale is accompanied by an explanation about the background and the significance of the clothing and symbols. While Bunatal wants everyone to wear and appreciate the clothing, she said it is important to understand the meaning.

Bunatal presented her work at the college’s Park Tank event this past September and now works with an Ithaca screen-printing company to manufacture her products. Malaika Apparel is already accepting and filling orders, and Bunatal said she is currently working on more advertising and publicizing of the brand after the recent launch.

“This launch was really successful,” Bunatal said. “The amount of support that I got is amazing. When I saw the final product, it was one of the best feelings ever.”

From designing to choosing a platform to creating her product, plenty of work went into this launch, Bunatal said.

“I wanted to quit and give up several times,” Bunatal said. “I don’t know what I’m doing, but why am I going to let that stop me? Why should I give up? There’s going to be a final product to come out of this that’s beautiful and liberating.”

Bunatal said she’s received nothing but good feedback about her brand. Bunatal cited the many friends, family members and professors who helped make her dream business a reality. 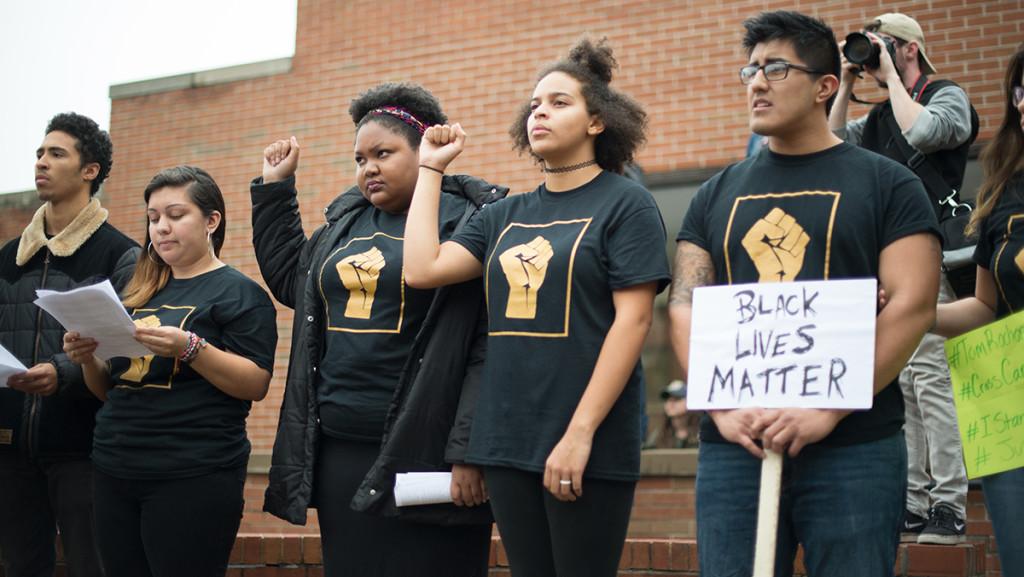 Sophomore Brittany Gardner is one of Malaika Apparel’s first customers. Gardner said she admires Bunatal’s dedication and is happy to support black-owned businesses. Gardner said she purchased the shirt with the black power fist because it ties the movement together. She said she believes Bunatal’s company will be successful from what she has seen so far.

“The amount of people who want shirts — including faculty and students — it shows they’re very proud of the design and of Rita and also how it connects people, in a sense,” Gardner said.

Moving forward from her successful launch, Bunatal said she is looking to create sustainable partnerships with continental, Ghanaian and Kenyan organizations. She said she would also like to team with local grassroots organizations, and she hopes her clothing brand will affect people throughout the world and someday grow into more than just apparel.

“I think being genuine is one of the more beautiful things about a brand,” Bunatal said. “It’s real people who are affected by real problems in the world.”

Bunatal is currently working on releasing more designs for this fall and further in the future. She is also working on an upcoming line designed for the empowerment of women of color. Singh said Bunatal’s intersectional approach highlights the power of her company’s message.

“With Rita’s voice, it’s an empowerment not just for the racialization aspect, but for women as well,” Singh said. “This fabric represents the intersectionality of oppression.”