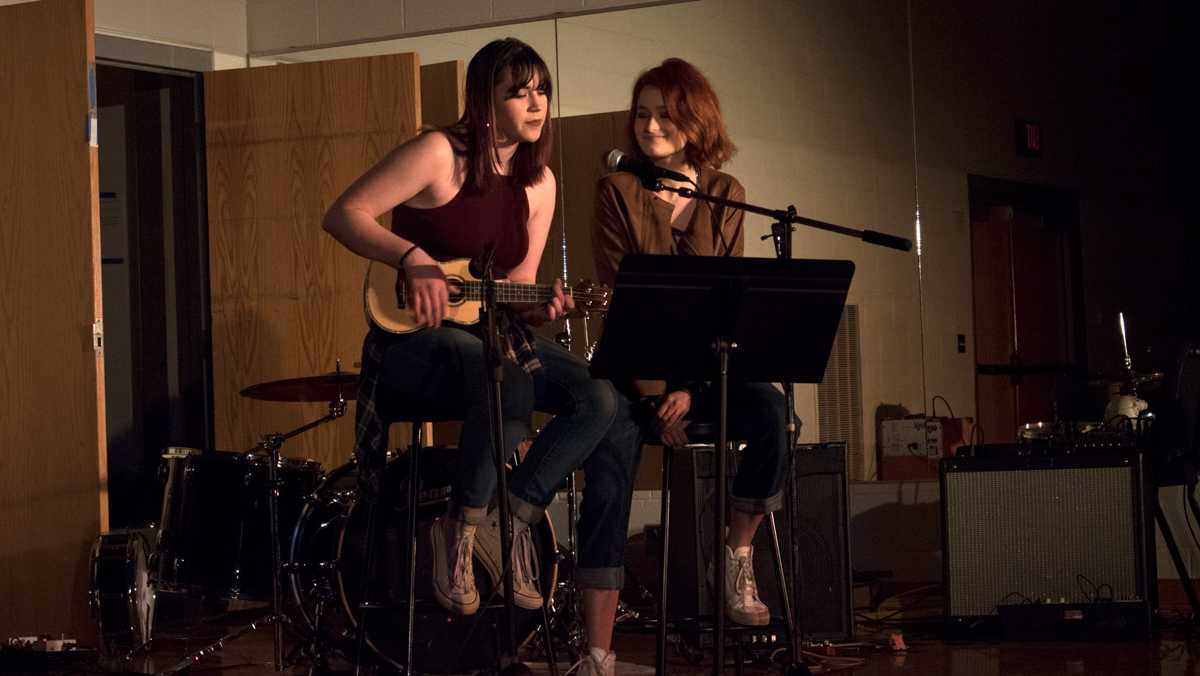 Caroline Brophy/The Ithacan
Sophomores Eliana Noznesky and Lydia Brown who make up L.E. played at the Music for Our Lives concert held by the Macabre Theatre Ensemble on campus as part of their concert series.
By Vivian Goldstein — Contributing Writer
Published: March 27, 2018

A spotlight illuminated one corner of the room, calling attention to the drum set, microphones and amplifiers. There were approximately 40 people sitting in the crowd, but once the music started, almost everyone was out of their seats and dancing, tapping or singing along.

The March 23 concert, Music for Our Lives, featured five acts — L.E., Leonardo DeCapitated, Paleontology, Grover Cleveland and Jerry Skyscraper — ranging from popular music played on the ukulele to punk music that one musician played so passionately, he accidentally damaged the drumstick. At the end of the night, they donated half of its proceeds, which amounted to $133, to the official March for Our Lives.

Music for Our Lives is part of a series created by Macabre Theatre Ensemble at Ithaca College. The series started in Spring 2017 and is a mix of solo and groups performances. The goal of the series is twofold: to provide a new platform for Ithaca musicians and to support local organizations by donating half of each concert’s proceeds. The concerts did not start as a series but became one after their second concert, Advocatin’, which raised $68 for the Advocacy Center of Tompkins County.

The series started April 15, 2017, with a singular concert called Punks Against Fascism, which aimed to make a difference during the early stages of President Donald Trump’s administration. Senior Matthew Porter created the concert with the help of Macabre Theatre Ensemble. Porter and the group decided to donate half of the concert’s proceeds to Planned Parenthood for this concert to support women’s healthcare, since it was being targeted at that time.

Concert organizer junior Jacob Sullivan said he did not expect much money to be raised from the first performance but felt it was important to do it anyway.

“We weren’t going to make a huge dent with just one benefit show, but we thought anything we can do to stick to it and support the things we really care about and get that message out there,” Sullivan said.

Junior Alexandria Paul, artistic director for Macabre Theatre Ensemble and executive liaison for the concert series, said the concerts are a fun way to listen to live music while giving to the community.

“We’re a small club, and we do horror theater,” Paul said. “We don’t have a lot of power, and so we want to support the people that do.”

Freshman Dean Shinner, producer of this semester’s concert series, said the concerts bring together passion projects. Members of Macabre Theatre Ensemble get to support political causes they care about, while musicians who want a space to share their music have an venue to perform.

The concerts are also a good way to have fun while supporting a good cause, Paul said. Since donations are not always a possibility for college students, going to the concerts can act as a more viable option, he said.

“I feel like it’s important to go because you’re also doing something with your money,” Paul said. “College kids don’t have a lot of it. But the little that I have, I like to do something with it.”

For Valentines for Planned Parenthood, Macabre Theatre Ensemble partnered with Ithaca College Planned Parenthood Generation Action, an organization at the college that raises awareness and advocates for reproductive rights. They worked together to sponsor the event and pass out free condoms, lube and informational pamphlets at the door. By the end of the night, the groups were able to donate over $150 to the local Planned Parenthood.

“It was really exciting, and it pushed me and a lot of people in Macabre that we wanted to do this more because it did make a small dent,” Sullivan said.

Michelle Thevenin, director of development at Ithaca’s local Planned Parenthood, said donations of that nature are helpful and tend to support campus outreach, which addresses issues of consent, sexuality and education.

Arts One on One: Macabre Theatre Ensemble director Alex Paul

WATCH: Ithaca community rallies at March for Our Lives