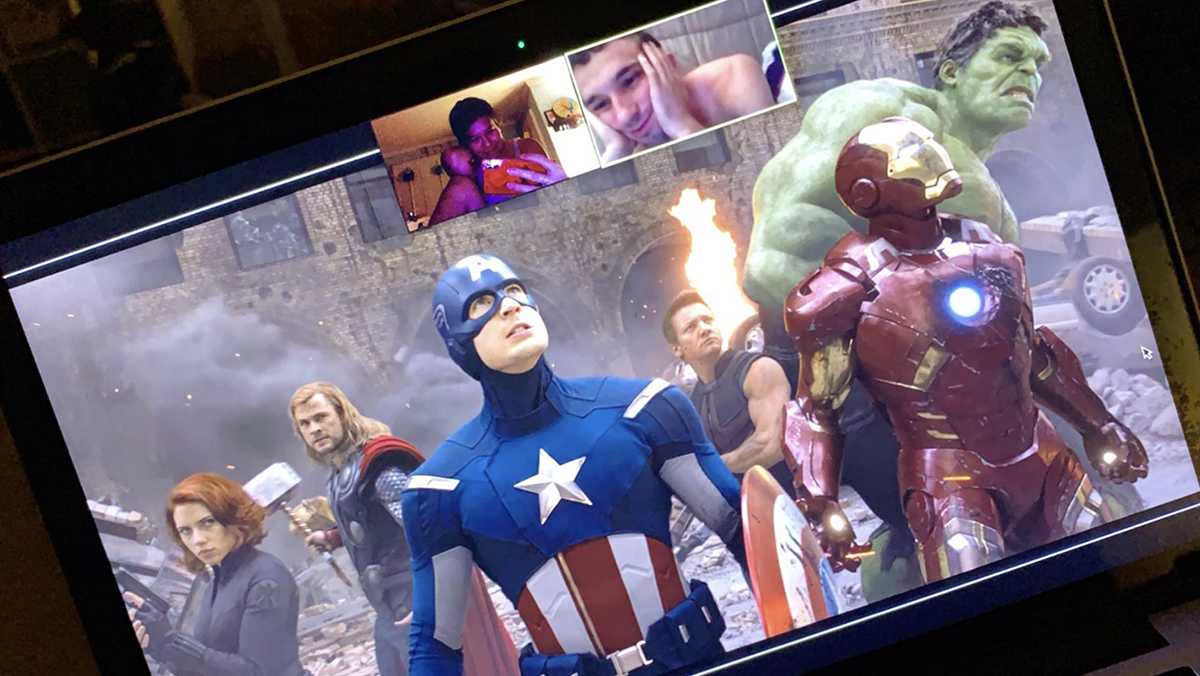 Courtesy of Paige D’Encarnacao
D'Encarnacao and her boyfriend Joseph Thompson have been staying close during the pandemic by spending quality time watching movies on Zoom. Virtual dates have become a hallmark fo social distanced dating in the last year.
By Sydney Brumfield — Staff Writer
Published: February 13, 2021

With Valentine’s Day around the corner, one of the few holidays left unscathed by the COVID-19 pandemic is approaching. Love is in the air, but relationships look a little different this year.

Due to social distancing practices being implemented since March 2020, this previous calendar year was not the most conducive to romance. Despite the obvious hurdles in their paths, some Ithaca College students have managed to build and maintain relationships in a world dominated by virtual interactions.

Sophomore Nikeratos Stycos and his girlfriend Audrey Budington, who graduated from Berklee College of Music in 2018, began dating in January 2020. Budington said the couple’s relationship was predominantly long distance until the college sent students home in response to the national lockdown in March. As a result, Stycos returned to their home state of New Hampshire.

“In the beginning it was kind of hard, just because we had never spent so much time together,” Budington said. “He was on spring break visiting and then it was like, ‘Well I guess I’m not going back.’ So we were both like, ‘Yay,’ and then like, ‘Wait, oh my God, I figured this was a situation we would get into a while from now.’”

Though the couple struggled with transitioning to spending a lot of time together, Budington said they found communication was key in growing a healthy relationship with the complications surrounding COVID-19.

Stycos said that although they were seeing each other more frequently, there was little for them to tangibly do. Stycos said they learned that at the end of the day, the activity doesn’t matter much when in good company.

Not all couples were able to spend so much in-person time together throughout the last year. Sophomore Paige D’Encarnacao and her boyfriend Joseph Thompson had to take a virtual approach in order to maintain their relationship that began in March 2020 after meeting on the dating app Tinder.

D’Encarnacao said their relationship was getting started when she had to move back to her home state of California for the remainder of the semester, but Thompson remained in New York.

“The hardest thing is the time difference for sure,” Thompson said. “I am three hours ahead of her, so I will normally be talking to her at one or two in the morning.”

Despite being 3,000 miles apart and enduring a three hour time difference, the couple managed to make things work.

Masks Are Hot encourages people to find ways to do activities in a safe way, like via Zoom. Carchedi said that utilizing the “party” function on streaming services like Netflix, Hulu and Amazon Prime Video is a great virtual date for couples who are unable to see each other.

“Watching movies together has definitely been my favorite date we have done,” Thompson said. “It’s about the closest thing you can do next to seeing somebody in person.”

Junior Brighid Igoe and her girlfriend began dating in April 2020 after being close friends. Igoe said they spent the first six months of their relationship without being able to see each other in person. The couple managed to find a way to form a meaningful relationship through technology.

Igoe said the two of them talked on Zoom and watched movies together. The pair also enjoyed reading books together and discussing them. Another activity the couple appreciated was partaking in their friend group’s weekly tabletop role–playing game session on Saturdays.

“We ended up using Zoom a lot because that’s the closest we could have to being in the same room,” Igoe said. “But we obviously did texting and the occasional voice phone calls, but Zoom was the best one so we could still see each other.”

While couples had to struggle with maintaining their existing relationships, finding safe ways to date from the perspective of singles has posed challenges as well.

The Masks are Hot team said it is important to have a “COVID convo” with potential partners before a meet up. This entails discussing if they have been in close contact with other people or discussing how frequently they wear masks around others.

“Dating apps, when done correctly, can be a good way to meet people,” Kaiser said. “I also think that if you’re in a Zoom class with somebody and you think they are attractive, you have their name, it’s not that hard to just follow them. Maybe in the beginning, that was weird and creepy, but we have gotten to a point now where everybody understands that that is a way to meet people. People shouldn’t be afraid to break out of their comfort zone a little, especially given the situation.”

Thompson said it has been difficult to adjust to the circumstances of navigating relationships this year.

“You just know and keep reminding yourself that it is going to be worth it, and be in the moment,” Thompson said.