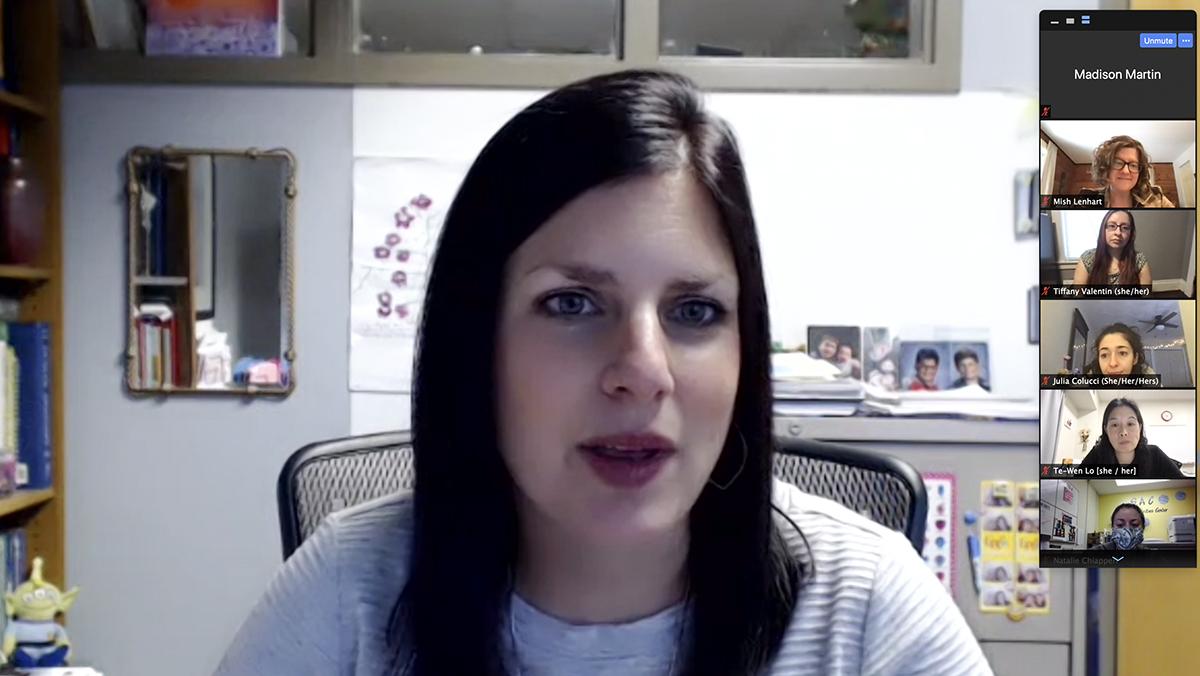 Courtesy of Women in Leadership
Julie Dorsey, assistant professor in the Department of Occupational Therapy, is a panelist at the first Women Leaders Series event March 1 on Zoom.
By Grace Azuala — Staff Writer
Published: March 3, 2021

During a time of social distancing and isolation, the organizers of the Women Leaders Series are still striving to unify and celebrate the women of the Ithaca College community.

The ninth annual Women Leaders Series launched its first event March 1 and will continue hosting 11 more virtual events throughout March. The series was organized by Student Leadership Consultants sophomore Jolivia Manning, sophomore Julia Colucci and senior Natalie Chiapperi, as well as Michele Lenhart, director of student engagement. Lenhart said that in past years, the series included 10–20 in-person workshops, networking events and a trip to Seneca Falls. Because of the pandemic, all in-person events were canceled and replaced by virtual programming.

Lenhart said the theme of the series is “Essential Women,” an idea that was inspired by the essential workers who have worked throughout the pandemic. Lenhart said that for the first three weeks of March, members of the Ithaca College community will be able to nominate women within or outside of the college community who inspire them. The Office of Student Engagement will then create posters spotlighting the nominees to hang around campus.

In addition to the Recognizing Essential Women event, Manning said there are new events that focus on women working in male-dominated fields, like the Women in the Outdoors event March 10 and the Women in STEM event March 16. Manning said that as a health sciences major, she was excited for the opportunity to plan an event featuring female alumni who understand the struggles of being a woman in STEM.

“Being a STEM major, it’s not necessarily easy,” Manning said. “You do have moments when you feel knocked down or when you’re just not motivated at all, and some of those individuals or alumni that we’re having have been in our shoes. They know exactly what it feels like to be a health sciences major or just a STEM major in general, so learning from them, hearing from them, how they dealt with it, is definitely an important thing that I’m looking forward to.”

Chiapperi, an environmental science major with a minor in outdoor pursuits, said she hopes that this event provides women in male-dominated fields the opportunity to build a network of women who can support one another.

According to research compiled by Catalyst, women in the United States made up 25.8% of computer and mathematics professionals, 18.7% of software developers or applications and systems software professionals, 15.7% of architecture and engineering professionals and 13.9% of civil engineers as of 2019. Research also found that women are more likely to be in lower paying positions compared to men.

“I think it’s a really good way to bring students within the same field together at school and then work together moving forward, and also to learn from women in other fields and see what they’re doing and succeeding in their field,” Chiapperi said.

Colucci said she thinks the series is also applicable to women in all fields and will help students build confidence that is essential to self-growth.

“Regardless of which major you’re in or which career path you go down, you’re going to face similar challenges,” Colucci said. “A lot of women face self-doubt because of their gender. And just things like that, where there is discrimination and even within yourself, like inner conflicts, because of everything that society has drilled into you and everything that society has built into other people around you, that make your experiences pretty similar. A lot of the workshops that we have are more about self-growth and learning how to overcome these challenges that all women face.”

Lenhart said that the events being held virtually allows the office to invite more guest speakers. One of the guest panelists is Julie Dorsey, professor and chair of the Department of Occupational Therapy. Dorsey received the IC Women of Distinction award, alongside Te-Wen Lo, associate professor in the Department of Biology, and Tiffany Valentin, assistant director in the Office of State Grants, as part of last year’s Women Leaders Series. The award aims to honor female faculty or staff members who act as role models and advocate for women in their field. However, due to COVID-19 restrictions, the in-person awards ceremony was canceled. Dorsey said that to make up for last year’s celebration, all 2020 IC Women of Distinction recipients were panelists at the kick-off event for the Women Leaders Series.

Dorsey said she was looking forward to having authentic conversations with fellow recipients and students about her past experiences.

“The three of us, we have no problem being real and sort of telling the good stuff and the bad stuff,” Dorsey said. “I think that modeling that and showing that to students can be really powerful. Anytime that students can hear, in particular women, in the workplace who are in leadership roles, who also can be vulnerable and be real. I think that that’s a really important model for students to see.”

Colucci said she is excited for the remaining events and hopes that attendees leave the Women Leaders Series feeling united as a community.

“I really want attendees to feel heard and understood and that their experiences are common and can be shared with other people,” Colucci said. “As women and female-identifying students, we will face similar experiences with discrimination or inequality. I think, unfortunately, that’s how it is for now. I think that talking about it, and teaching others about it, will hopefully resolve the issue more and more as time goes on. … I think it’s really important for people to feel like they have community and feel heard.”