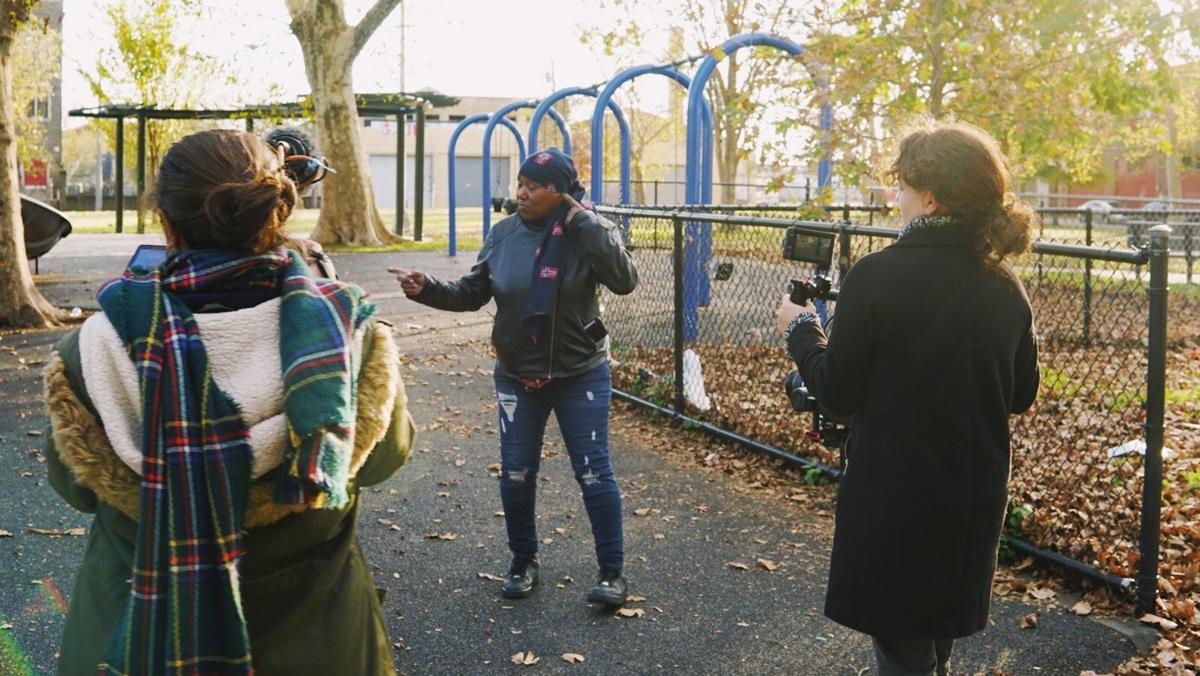 Courtesy of Alex Klein
Kristen Harrison '20, left, and Alisha Tamarchenko '20, right, film Sonya Sanders, center, walking around her neighborhood during the production of the alumni's documentary "On the Fenceline."
By Gabrielle Topping — Staff Writer
Published: October 2, 2020

“You don’t stop the fight,” said Sonya Sanders, a Philadelphia resident and member of Philly Thrive. “You still have to fight because somewhere down the line, someone is going to have to listen.” Sanders is just one of the activists advocating for environmental justice in the documentary “On the Fenceline: A Fight for Clean Air,” produced by four recent Ithaca College graduates.

Most seniors spend their free time on the weekend catching up on homework or hanging out with friends. However, Tara Eng ’20, Kristen Harrison ’20, Alex Klein ’20 and Alisha Tamarchenko ’20, spent nearly every weekend filming the documentary during Fall 2019. After spending four-hour car rides traveling from Ithaca to Philadelphia and countless hours working together over the course of the year, they turned their working relationship into a friendship.

The documentary tells the story of Philly Thrive, an activist organization seeking environmental justice after an explosion at a South Philadelphia oil refinery in June 2019 left Philadelphia Energy Solutions (PES) bankrupt. Philly Thrive fights to keep the refinery closed because the pollution from PES has been linked to cases of asthma, chronic obstructive pulmonary disease and cancer.

“We put a lot of love and care into representing this story, and it’s really heartening that other people are finding meaning in it,” Eng said. “We’re living in a time where wins for environmental and racial justice really need to be widely celebrated. The best part of having this story shared transnationally is knowing that this organizing work is being celebrated beyond this small community in South Philadelphia.”

Klein said that the group, including lead researcher Marlee Brooks ’20 and assistant camera and sound recordist Alfio Vasta ’20, spent the first few weeks of Fall 2019 researching topics. Eng and Harrison are from Philadelphia and said that the explosion was prevalent in the news in September 2019.

“It was one of the first things we pitched actually, and it was shot down,” Klein said. “Then, a few weeks later, we were in a rut for story ideas, and we came up with a better presentation with more research, and we got the ball rolling.”

Ben Crane, associate professor in the Department of Media Arts, Sciences and Studies, said that in Documentary Workshop, he looks for compelling stories that illuminate issues, and his students sometimes have to pitch multiple topics before finding one with potential.

“Ideally, we try to produce films that inform and entertain, make a positive difference in the world and exceed the expectations of the students and professor,” Crane said. “The topic proposed … offered an important issue, access to strong characters and the elements of a story.”

Crane said that the documentaries produced in Documentary Workshop have been regular finalists of awards, including the College Television Awards. Crane said that in the past, alumni have also been honored by the Sundance Institute and the Directors Guild of America for work done both in and outside the class. He said that the films produced in Documentary Workshop have been exhibited on five continents, including North America, Europe, Asia, Africa and Australia.

Tamarchenko said there is an expectation that Documentary Workshop would be difficult, and the students knew that going in. Klein said that he didn’t run cross-country his senior year so he could dedicate his senior year to working on the documentary and gaining real–life experience in the field.

“I came into the semester knowing that I would be sacrificing my social life and everything for this one class,” Klein said. “Not running my senior year was one of the bigger sacrifices I made that year, and I was nervous it was going to be the wrong choice. Then, once we started getting going with the project and seeing how much fun we were having and the real–life production experience we were getting by making a film and the struggle and creating a bond with everyone was really worth it.”

Eng said one of her favorite aspects of filming the documentary was the tightly knit community of Philly Thrive. Harrison said that as Picture 2 Picture Productions volunteered with Philly Thrive over the weeks, the students became closer with the group. One of the aspects that stuck out to her the most was the dynamic of the community.

One day, in an attempt to get in touch with a source — who they only knew as Ricky — Philly Thrive organizers instructed the members of Picture 2 Picture Productions to go to Stinger Park. Once there, they were to approach any group of men they could find and ask for Ricky. Harrison said that Klein and Tamarchenko talked to a man named Lester at the park, and he got Ricky for them from a bar across the street.

“It was funny to see how the community operated in that way,” Harrison said.

Postproduction for the documentary was completed in June 2020 amid the COVID-19 pandemic. While editing, the group members tried to make decisions unanimously and sanitized the hard drive as they passed it among each other.

“There was a lot of trust in our team, creatively and logistically, which I think really helped us with this process,” Eng said. “We made the best documentary we could have possibly made because we all approached this with different experiences and viewpoints.”

First-year graduate student Christopher Tinti said that he had not heard about the explosion before watching the documentary. Tinti said one strong suit of the documentary was Picture 2 Picture Productions’ exploration of how the oil factory plant affected residents of the area.

“My initial reaction to seeing the documentary was an emotion of awe and shock at the same time,” Tinti said. “The shots, editing, sound and camera angles were all amazing and felt professional.”

Klein said Picture 2 Picture Productions’ main goal was not being accepted to film festivals but to share Philly Thrive’s message.

“Spreading the voice of Philly Thrive beyond just the city of Philadelphia is so important to other people struggling,” Klein said. “Seeing the success and power that Philly Thrive has on your screen in the form of a film will give confidence to others fighting for their own rights, whatever their struggle is. Oil refineries are a terrible and dangerous threat to our environment, and sharing that message with the world and sharing Philly Thrive’s fight is so important to make our world a better, more hospitable place to live.”