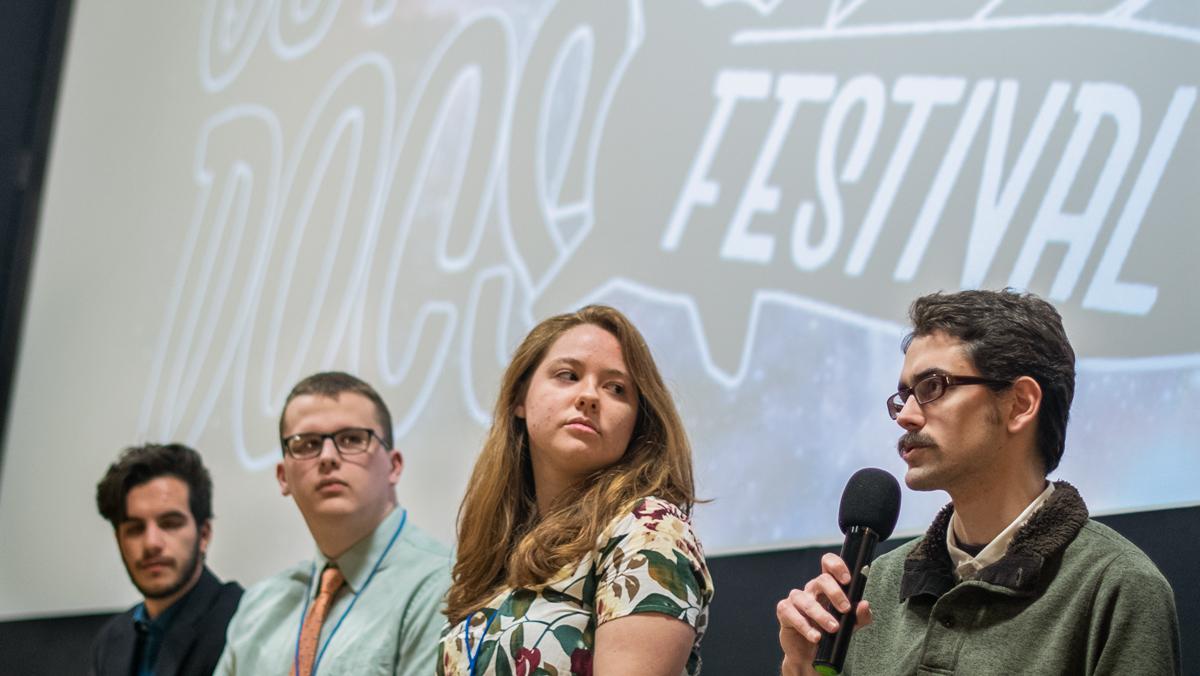 An audience sits quietly in front of a screen in Cinemapolis, watching the curated movie selections of the Outer Docs Film Festival on Nov. 10. The energy of the room shifts with each documentary, as every film shows the lives of people searching for community, the beauty and fragility of nature’s giants, poetic and jarring takes on life and death, and the hope and uncertainty of taking roads less traveled.

The Outer Docs Film Festival was created in 2017 by Veverka Bros. Productions. This year, the company partnered with Cinemapolis for the festival. The festival also offers awards and cash prizes. Categories for awards include Best Documentary Feature and Best Student/Local Documentary. Each category winner receives cash prizes of $100, and the runner-ups receive cash prizes of $50.

Jesse Veverka, director of the festival and co-founder of Veverka Bros. Productions, said the film festival was created to give attention to films that stand apart from convention. The website filmfreeway.com describes the event with three, short sentences that sum up the essence of the festival: “Outside the mainstream. Outside the box. That’s Outer Docs.”

The films were grouped into four sections. The sections reflected the themes of the movies within the festival: Searching for Community, Nature’s Giants, Life and Death, and Roads Less Traveled. Veverka said that many film festivals have one overarching theme, making it difficult for some filmmakers to find opportunities to show their films to the public. He said he created these themes after the films were selected so that as many people as possible could have the opportunity to participate in the festival.

One of the somewhat unconventional films at this year’s film festival was “King of the Road,” directed and produced by Cate Celso. The documentary follows the true story of Rick Torres, a truck driver who followed his passions and became one of the most renowned Elvis Presley tribute artists in the United States. Celso said she related to Torres and the work he put in to succeed in a career he truly loved, and that is why she wanted to make a film about Torres.

“Quite a few of us are in day jobs to support a passion project or passion career that we want to have,” Celso said. “To just see on the level he’s been operating for 20 years, I found it inspiring. I’m kind of doing a version of that myself.”

Celso’s film lasted 25 minutes and was just one part of the eclectic offerings for the day. Some of the films showed cultural challenges in foreign countries and contained very little English dialogue. Another explored the life of a woman named Laura who collects body parts and dead animals in jars. One told the story of a community that lives on houseboats.

“We created a home for documentaries that might … give a different take on a subject that isn’t usually found in most mainstream documentaries or subjects that most people wouldn’t even think of programming at a different festival, that are just kind of strange or unique,” said Hannah Basciano ’17, co-director of the Outer Docs Film Festival.

Basciano said that she also wanted to give every documentary appropriate representation and that the festival actively prevents one film from taking too many awards. Basciano said certain films tend to steal the spotlight during film festivals. This year, the festival received over 80 submissions and the organizers narrowed the list of finalists down to 14. Of the 14, 11 got awards.

The festival also included Q&As in which the filmmakers engaged with the audience about their films. The crowd asked about the meanings behind the movies, the directors’ intentions and more.

Another aspect that makes Outer Docs stand out is that many of the filmmakers are students at Ithaca College or members of the Ithaca community. Junior Ella Krings, director and producer of “Heart of Gold” and a documentary studies and production major, said she participated in the film festival as a way to speak out about her beliefs and call for social change.

“Just from studying documentary film and studying the different ways that people have used it in the past, I think it can be a really wonderful form of activism,” she said. “You can make a lot of strong arguments and present information that people might not always know about, that will be compelling for audiences.

Krings’ film followed the family and friends of Jerame Turner, a teen who was shot and killed, as they worked toward ending gun violence in their community in Pittsburgh. Other directors also used their films as modes of activism like Krings. One of these directors was Jennifer Clawson ’19, who co-produced “The Noise Remains” with junior MJ Alfonso. The film follows a group of military veterans who protested needless war and began a nonprofit to spread awareness for their cause.