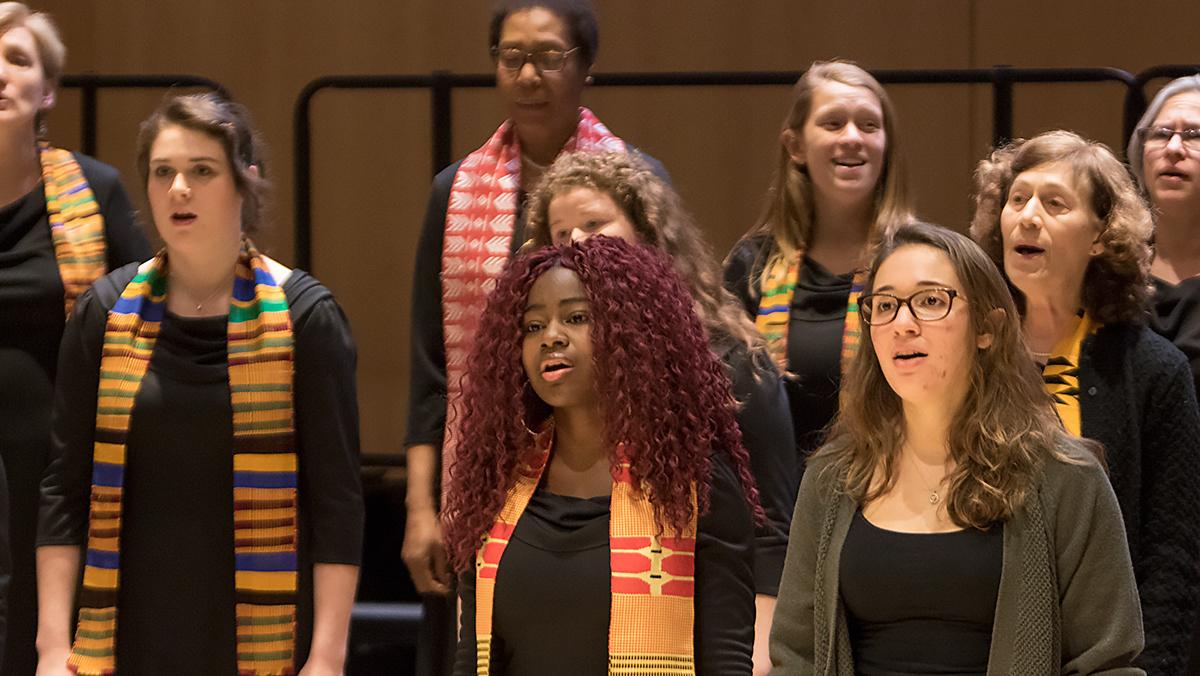 “If you get there before I do, coming for to carry me home/ Tell all my friends I’m coming, too/ coming for to carry me home,” sings a diverse group of men and women. Standing in a line on the Ford Hall stage, their voices fill the auditorium with the lyrics of “Swing Low, Sweet Chariot,” which foretell the coming of Harriet Tubman and the Underground Railroad. Each singer sports an elaborately patterned, handmade Kente cloth, a scarf-like fabric originally from Ghana. Each seeks to honor and preserve the intricate history of the Negro spiritual, an African-American hymn closely associated with the American slave trade.

The group will hold several performances for Black History Month, including a concert Feb. 19 at the St. James A.M.E. Church and a recital Feb. 21 with bass-baritone singer and actor Darren Stokes at the James J. Whalen Center for Music. In May, the group will perform at the John F. Kennedy Center for the Performing Arts in Washington, D.C.

The group has grown steadily since its inception in 2010, Whitehead said. What once comprised 16 members has blossomed into a diverse group of 80 singers from all corners of the Ithaca area — including students from the college and Cornell University.

“When I first started, it was mainly community members, and I had a few students who would come and help, but now we have maybe a third Ithaca College students in the group,” Whitehead said. “It’s truly a connection between the campus and the community. I strive for racial diversity, which is not always easy in Ithaca.”

Junior Josiah Spellman has sung with the Dorothy Cotton Jubilee Singers since his freshman year. Spellman said the group made him feel at home when he lacked a sense of community. 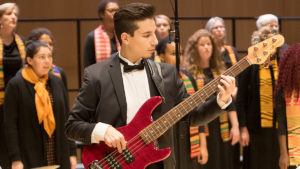 Junior Tristen Jarvis plays the guitar at a rehearsal for the Dorothy Cotton Jubilee Singers on Jan. 23. The performers have several upcoming performances throughout February. Fernando Ferraz/The Ithacan

“When I first came to IC, I was at a very discomforting state being around a lifestyle that’s totally different from what and where I grew up,” Spellman said. “I found out about DCJS through Dr. Baruch Whitehead in the West African Drumming & Dance seminar. I asked if there were any gospel groups in Ithaca that I could join because I wanted to have a piece of home with me at all times while being in Ithaca.”

The group not only builds a strong community of passionate singers, but it also focuses on the history of the Negro Spiritual. Several of the hymns were composed for more than musical reasons. Slaves used the songs to spread word about the Underground Railroad or to announce other pieces of crucial information.

Junior Juliana Child, board member of the Jubilee Singers, said the history of spirituals is often overlooked.

“A lot of them are actually messages in code,” Child said. “Any spiritual that references a railroad is not about a train; it’s about the Underground Railroad. This is how — this music is how the slaves communicated with each other about how to escape the nightmare they were living in. … Often, a lot of people … with gospel music and other black art forms think it’s fun and uplifting, and it is uplifting because it had to be. Music was the only glimpse of happiness that the slaves had.”

Whitehead said he strives to use the hymns as an educational opportunity: a chance to bring the dark, historical context of the songs to a modern audience.

“We don’t know the history — the goal is to educate,” Whitehead said. “If you’re in the mind of a slave, these songs were cathartic. They were songs that got you through to the next day because they were songs of hope and redemption and justice. We want to keep that alive.”

“We don’t have a dogma that people sign off on,” he said. “We have Jewish people in the group. We have gay people, straight people, young, old. We are not really associated with any kind of religious group. We’re just looking at this music as purely music for all of humanity. So even though it’s an African American art form and the music of the slaves, we feel like we, as humans, can benefit from their stories and their songs.”

Whitehead said that now, more than ever, it’s important to discuss racial issues in order to unite.


“In this country and the world today, it’s really important for us to talk to each other and not over each other,” he said. “There are things that you can say in music that people will respond to better than if you had a conversation with them. … I think the whole idea of coming together as a community using music, the music of the Africans to unite us … and music does that: It builds community.”