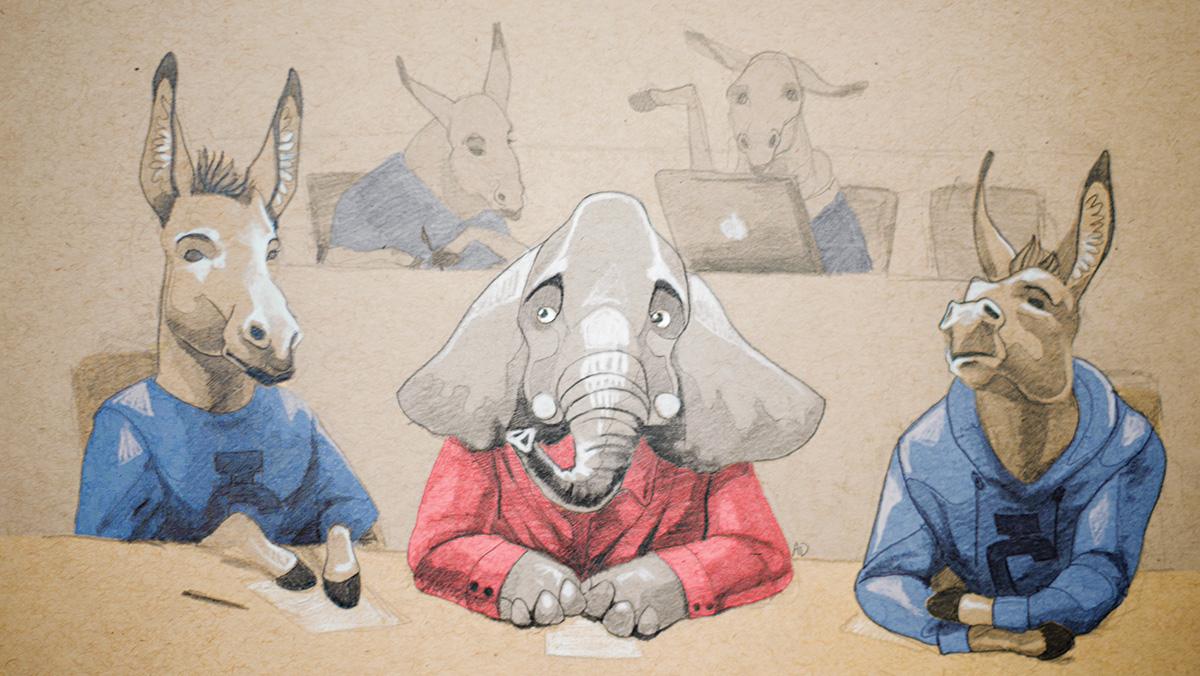 When Kyle Stewart was in second grade, his school held a mock election during the 2004 presidential race, pitting former Republican President George W. Bush against Democratic challenger John Kerry. Stewart, in a nod to his future political leanings, campaigned for Bush, albeit for a different reason than he likely would today.

“I was like, ‘John Kerry likes the Red Sox. I like George Bush,’” Stewart said. “And then I campaigned for George Bush. I was 8 years old, and I made posters that I put up all across the school, and then we voted, and George Bush won the election.”

Now a sophomore journalism major at Ithaca College and the president of IC Republicans, Stewart’s political ideology has matured since his second-grade poster-making campaign, as he said he often reads policy papers on weekends to inform his positions on different political issues.

However, conservative students on campus do have a few clubs they can join where they can express their political ideology. One such organization is IC Republicans, which Stewart said focuses primarily on networking and campaigning for specific Republican candidates. Stewart said IC Republicans is officially affiliated with the Republican Party. For students more outside the two-party structure and with a more libertarian bent, there is IC Young Americans for Liberty, which is more of a grassroots activist organization.

Freshman Alexander Shedd is a member of ICYAL and said he feels there is a general misunderstanding of what libertarianism is.

“There’s definitely a stigma around libertarianism,” Shedd said. “I think in terms of what the youth movement of libertarianism is in modern times, it really just means economically conservative and socially liberal.”

Stewart said there is a general lack of understanding of conservatism and a resistance to the idea that Republicans are not all the same.

“We’re not just one checklist of ideas,” Stewart said. “There’s an old saying: If you take three Republicans and put them into a room, you’ll come out with four different ideologies because we all have our own concept of what being a Republican means.”

Stewart said one example of this is his support for same-sex marriage, which many conservatives oppose.

Sophomore Jordan Lipset, a politics major who identifies as socially liberal and economically conservative, agreed with Stewart. She said there is a definite stereotype around being conservative.

“Once someone finds out you’re a conservative, they automatically think you’re a racist and against women’s rights and all that stuff, when in reality that’s not really true,” Lipset said.

Junior Zachary Lisien, a member of ICYAL, said he’s observed this stigma in action, as he believes there are many “closet conservatives” who don’t feel comfortable speaking up in class. Lisien said he’s never had a problem expressing his ideas in the classroom, but he sees how it could be an issue, especially for new students.

Lisien, a culture and communication major, said he takes a multitude of politics courses. He said at this point, he assumes that in his classes the vast majority of students are liberal, as well as the professor.

“I can tell from the students — the way they’re talking — [and] from the professors,” Lisien said. “I’ve had a few professors where I’ll continue taking their classes even though I know we disagree because it’s still good dialogue. It’s still a good conversation. It’s really just mostly through the dialogue that you can tell it’s mostly liberal.”

Stewart said while being the political minority on campus is not always ideal, there are advantages to it.

“For the most part, I enjoy having debates with people and discussions, and people usually come to me and ask me for my opinion on things, so I enjoy that,” Stewart said.

However, he said there are times when his conservatism has stuck out in the classroom. Stewart said he recalls an instance in a politics course he took when the professor posed the question of how the class would advise Democratic presidential candidate Hillary Clinton in her campaign. Stewart said he used the exercise as a way to critique Clinton.

“I was like, ‘First, I would tell her stop charging $200,000 per appearance. I would tell her to turn over her server,’ stuff like that. And the class kind of chuckled, and [the professor] was kind of taken aback by my stance on things,” Stewart said.

There have been movements in the past at the college to create more conservative dialogue on campus. In January 2004, Roger Custer ’04, a former chairman of IC Republicans, advocated for the college to take measures to promote intellectual diversity and expose students to conservative ideas on a predominantly liberal campus. In a report titled “The Case for Intellectual Diversity at Ithaca College,” published in 2004, he argued it is the college’s responsibility to present students with diverse viewpoints.

Custer said the response from Peggy Williams, then-president of the college, was mixed. He said a course was added in conservatism, and a few conservative guest speakers were brought in, but he said the Williams administration never got on board with a Center for the Study of Intellectual Diversity. And Custer said he hasn’t seen any commitment from President Tom Rochon regarding initiatives promoting political diversity and alternative viewpoints at the college.

But Shedd said he believes being in the political minority is a healthy experience. He said people who are politically knowledgeable enjoy hearing dissenting opinions and discussing ideas.

“I’ve even had some debates with certain faculty members over some opinions, and it’s all been very civil, very healthy,” Shedd said.

However, Stewart said it does bother him when there isn’t an honest debate of ideas and people refuse to listen to his perspective simply because it is conservative. Shedd agreed it’s important for people to keep an open mind about conservatism and libertarianism. He said those words are simply just labels and it’s imperative people decide what to identify with for themselves.

Stewart said something that is also essential is pushing back against the stereotype of conservatives and Republicans as heartless, greedy and obsessed with money. He said Republicans care about everyday people — they just have a different method of solving problems than liberals.
“Republicans have hearts,” Stewart said. “We care. Every decision that I make, every policy I support, I don’t just view it through a lense of pragmatic or an economic analysis. I do it, and I make my decisions also based off of how it’s going to affect people, how people can be better off.”