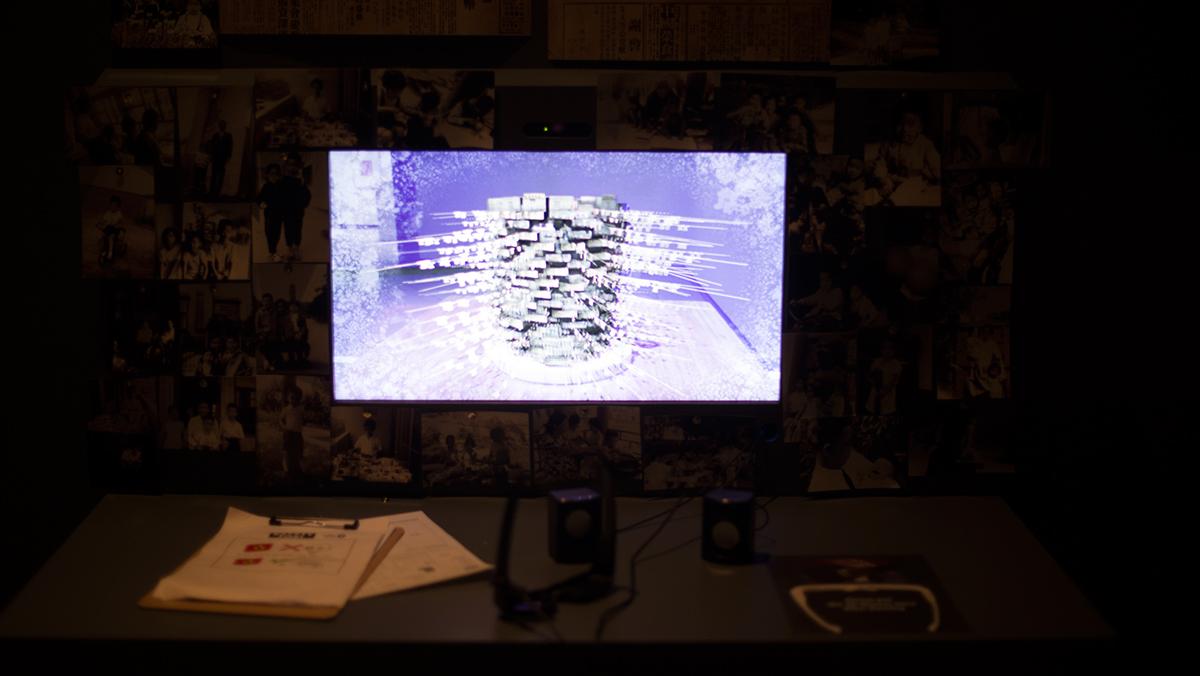 Tommy Battistelli/The Ithacan
Visitors at “The Inheritance” exhibit are given a pair of 3-D glasses that, when worn, animates the graphics displayed on the screens to convey a sense of virtual reality.
By Tyla Pink — Staff Writer
Published: December 7, 2015

Walking into a seemingly empty museum room is strange, especially when the only objects in view include dentures in a glass of water, a stopwatch, one shoe and an analog camera, each on its own designated platforms. On the opposite side of this light-filled display room are computers lined in a row; graphics that only 3-D glasses can enhance are displayed on each screen, and pictures of the artist and his family from his childhood embellish the space.

“The Inheritance” is Taiwanese artist Huang Hsin-chien’s second exhibit featured at Cornell University’s Herbert F. Johnson Museum of Art. This installation exhibit is an interaction between everyday objects, with video and stereoscopic computer animation as a way to explore dreams, memories and consciousness.

“The way that the artist manipulates the objects through sophisticated, stereoscopic animation is particularly astonishing and effective at creating a dreamlike space that evokes how memories and our subconscious can transform seemingly mundane objects and experiences into triggers for exploring the deeper meanings of relationships with people and events of the past, as well as how we pass those along to future generations,” said Ellen Avril, chief curator and curator of Asian art.

Huang Hsin-chien graduated with degrees in art and design in the United States then went on to become an art director for video game companies. When he returned to Taiwan in 2001, he founded a studio that focuses on joining traditional art practices with digital technology.

Unlike most pieces of art in this museum, visitors are encouraged to directly interact with the work in “The Inheritance” to achieve the full experience. What makes this exhibit stand out
is that it’s a direct comment on the relationship between Huang, his father and his childhood memories through the usage of mundane object in an unlikely format.

“The Inheritance” will be featured until Dec. 20 at the Johnson Museum of Art.