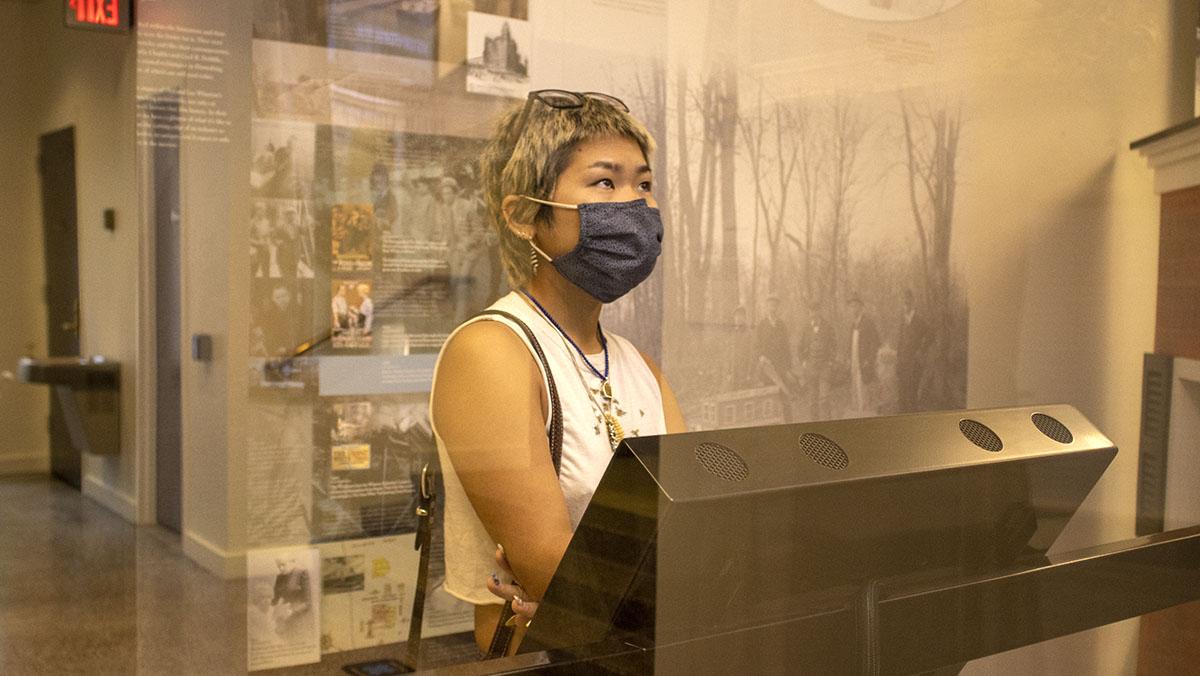 A glass display case stands tall in the middle of an exhibit hall, proudly displaying information and pictures about women in the workforce in Tompkins County. Industries are listed in bold fonts, followed by the demographics of women who worked in those fields — an ode to the contributions of women throughout history and a commentary on the opportunities that were available to women of different identities.

This display titled, “Defying Convention: The Overlooked History of Women Working,” is part of the larger exhibit “Breaking Barriers: Women’s Lives & Livelihoods” held at the Tompkins Center for History and Culture. The exhibit highlights women from Tompkins County and explores their contributions to the community. It opened July 2, 2021 and will remain open through February 2022.

“When we first thought about pulling together an exhibit about suffrage, it really became apparent to us that suffrage told such a limited story of the women in Ithaca and the different community efforts and programs and the legacy and culture that they had left behind,” Van Nostrand said.

The exhibit has six physical displays at the center focusing on different areas in which women broke barriers throughout history. Each section of the exhibit is presented in a large glass display. There are also interactive elements incorporated throughout the exhibit, like touch-screen technology, videos and audio interviews with local community members including Nia Nunn,  associate professor in the Department of Education at Ithaca College.

The museum is also hosting a series of events related to the exhibit like “Stop & Listen to HERstory,” an oral history experience that will be held Sept. 3 at the Tompkins Center for History and Culture.

There are also two virtual displays, “OVERCOMING BARRIERS TO VOTE: Woman Suffrage Movement in Tompkins County – One-Hundred +1 Years in the Making” and “SISTERS OF CHANGE: Unsung Sheroes for Racial Justice Whose Names Everyone Should Know.”

Ithaca College sophomore Ananya Gambhiraopet said she likes how the exhibit focuses on stories that are not typically told.

“I think there were a lot of things and careers … that are not discussed in history, or in textbooks in general,” Gambhiraopet said. “And the fact that Ithaca is a very small area which is probably just generally not discussed in textbooks and high school, it’s nice to learn about women in the specific area throughout history.”

Van Nostrand said the center tried to be as inclusive and representative as possible when deciding which stories to highlight. She said this focus on representation is essential to accurately portraying history.

“We think that organizationally, we don’t necessarily consider ourselves progressive,” Van Nostrand said. “We think that we are trying to show an accurate and representative history of the county that we are based in. And the interesting piece is that representation has come to be interpreted as justice and progression or progressive when really we’re trying to share stories of everyone who is here.”

Sophomore Jess Moskowitz said they liked the diverse perspectives that the exhibit offered by highlighting groups like Club Essence, an organization founded in 1973 to connect and support African American women in Tompkins County.

“I really liked how it was so intersectional talking about the experiences of women, but more specifically Black women or poor women of color,” Moskowitz said. “It really touched on all facets of Ithaca history. The timeline showed the first white settlers here but it also noted the importance of Native Americans in this land and understanding that and paying tribute to that as we understand later portions of history.”

Van Nostrand said the museum is sponsored by a number of community partners, all of which are women-owned businesses. The exhibit’s leading sponsor is Chloe Capital, a mission-driven venture capital firm that invests in women-led tech companies during the early stages of development. Chloe Capital was founded in Ithaca and has since expanded across the country while continuing to maintain a presence in the local Ithaca area.

Co-founder and managing partner Elisa Miller-Out said she was excited to get involved with the “Breaking Barriers” exhibit because of its focus on women throughout history and its close alignment to Chloe Capital’s mission.

“I love that this is sort of an opportunity to bring together the history of all these diverse women achieving these political and social and creative arts and business movements throughout time and then how that connects them to the work that we’re doing right now at Chloe Capital, which is very much about breaking down barriers for women and BIPOC and underrepresented entrepreneurs right now,” Miller-Out said. “So it ties together this historical context with sort of living history and how we’re making history today.”

Van Nostrand said she hopes this exhibit reframes the narrative of what is history and connects community members to the history center.

“I think that breaking down the narrative of who history museums are for and also what those collections hold is really our hope in exhibits like this,” Van Nostrand said. “The hope is that if we get the community to feel that their stories are respected and represented accurately by us and within our institution that communities will feel more open to sharing their history with us again in the future and collaborating with us, which means that we continue to be more inclusive and representative of the history of the community.”