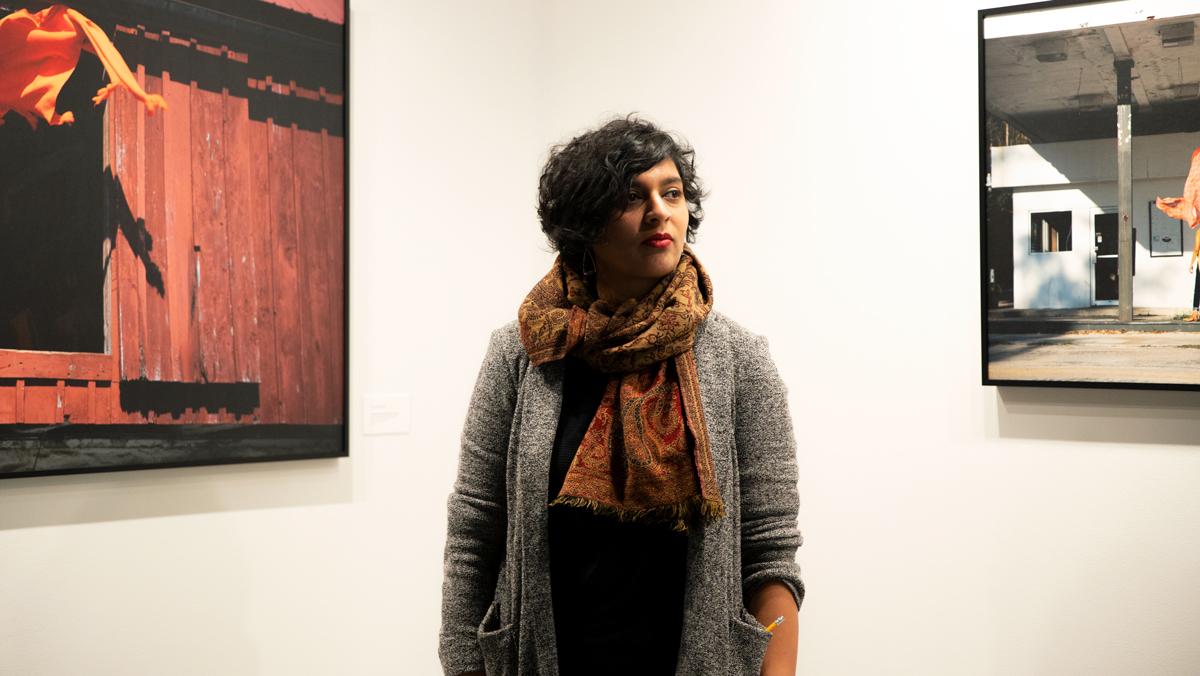 Reed Freeman/The Ithacan
Assistant professor Lali Khalid’s photo exhibition is being displayed in the Roy H. Park School of Communications’ gallery until Jan. 7. There are 17 photos in the exhibition.
By Maddy Martin
Published: November 20, 2019

There was light chatter in the Ithaca College Roy H. Park School of Communications gallery space as students, professors and community members wandered the room with plates of sushi, cheese and fruit. Every few feet, they stopped and gazed at one of the 17 photographs on the wall. The photographs were set in an array of locations, but all had two things in common — every photograph included a floating piece of fabric, and they were all taken by Lali Khalid, assistant professor in the Department of Media Arts, Sciences and Studies.

The gallery reception for Khalid’s recent showcase of her “Being Between” photo series was held Nov. 7. The series consists of 17 self-portrait photographs of Khalid and her family taken between 2013 and 2019. The focal point of every photograph is a different piece of fabric drifting through the air above and around Khalid and her family. The exhibition runs until Jan. 7.

“She has a very natural flow to her work,” said Hatice Brenton, local multimedia artist and friend of Khalid, while surveying the photographs at the reception. “There is always a hidden story beneath the art.”

The fabrics in the photos are called dupattas, Khalid said. A dupatta is a cloth placed over the head during prayer in the Islamic faith and is worn by women as a shawl or scarf. Khalid said the dupatta represents her mother and Pakistan, the country she was born in.

Khalid said she was inspired to create “Being Between” while she was at a wedding on a beach in South Carolina. She said her son was running after her in the sand, and she decided to take a picture with him to capture the moment. She set up her tripod and set a timer on the camera. As the camera snapped the shot, she took off her dupatta and threw it off to the side. In the finished photo, the dupatta floats in the air next to Khalid and her son, capturing a blissful moment in time. This particular photograph is not featured in the exhibit.

“[The dupatta] is two things simultaneously,” Khalid said. “It’s protecting me, but it’s also following me. It’s hovering. It’s impressions of a culture that I’m adapting to, which is the American culture, but it also the culture I’m forgetting.”

Khalid has been doing self-portraiture since she was in graduate school in 2007, but she said self-portraits often come out looking posed and unnatural. She said she combats this with the floating fabric because the natural flow of the fabric in the air helps to make the photo appear more organic.

Khalid encourages this approach to self-portraiture in the classroom. Senior Brian Johnson, one of Khalid’s students, said Khalid helped him hone his skills in photography and trained him to approach portrait photography from different angles.

“A lot of the photos I was taking were from my everyday perspective, and I was kind of taking photos just as I’m seeing the world as a person,” Johnson said. “She really encouraged me to move in and interrogate these spaces and go in them and engage with them as well as step back and let the spaces breathe and exist in their own world.”

After working on “Being Between” for six years, Khalid said she has learned how different types of fabrics will fall and how the movement of every different piece will impact the final photo. She said thicker fabrics will fall faster and wide ones will fan out, and even the method of throwing — whether she wads it up first or throws it loosely — changes the quality of the picture. So far, Khalid has thrown her dupattas in Pakistan, Michigan, Arkansas, Ohio, South Carolina, Pennsylvania and London, capturing her culture all across the world.

“I can’t just do it anywhere,” Khalid said. “It has to be a place that talks to me and says, ‘This is it.’ That’s where I’m to stand, and that’s where I’m going to take the picture.”

Khalid said that although she has done a lot with “Being Between,” the series is far from finished. She said she will always be changing as a person, and she always wants to capture those changes.

Khalid said she hopes her work will capture people’s attention and leave them with a message they can think about even after they go home. She said if her work evokes emotion and sticks with viewers after they leave, she has succeeded in her job as an artist.

“I’m a person from Pakistan,” Khalid said. “I’m a person of color. I’m an immigrant, and, when people look at me, they have a stereotypical image of me in their heads, and my work is based around the idea of challenging those preconceived notions and saying, ‘But I’m not what you think of me.’”