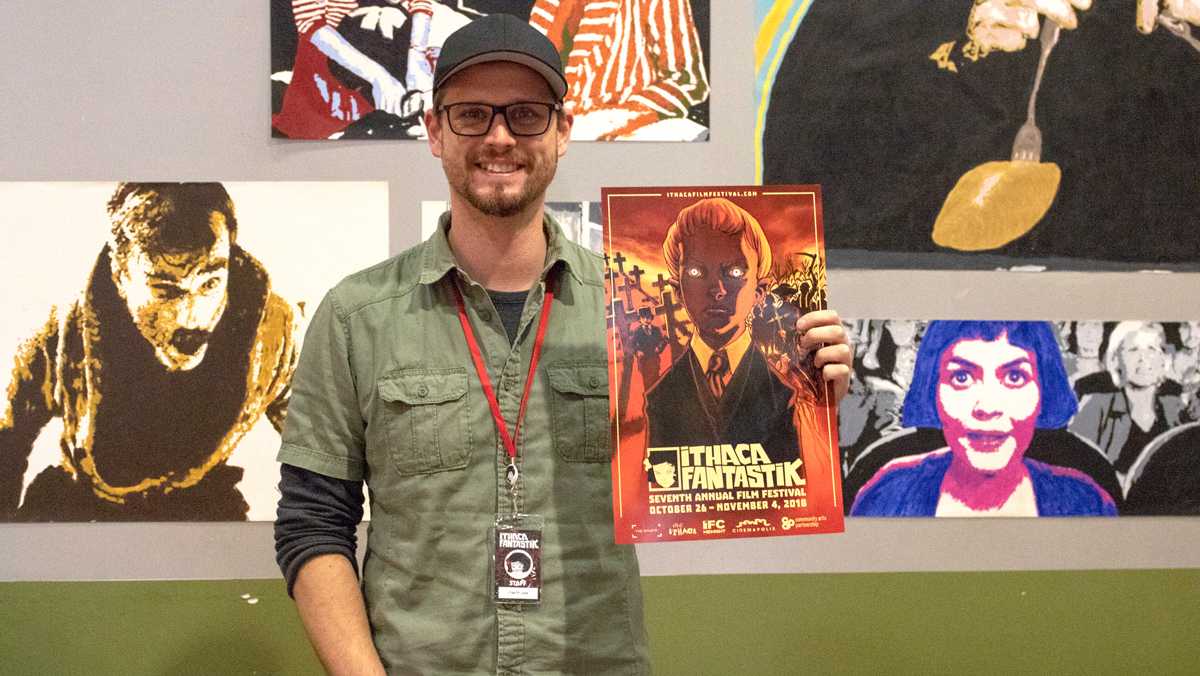 The trademark wafts of fried butter and warm popcorn filter through the compact lobby of Cinemapolis, Ithaca’s local, independent movie theater. Usually, the lobby is defined by a sage-colored wall opposite the box office, with a collection of posters at its center. But since Oct. 26, these posters have acted as the backdrop to the merch and logo of Ithaca Fantastik, Cinemapolis’s annual genre film festival.

Ithaca Fantastik, or IF, will continue into this weekend, concluding Nov. 4, when festival attendees can view movies both psychologically bizarre and unsettlingly gruesome. The film festival is in its seventh edition of programming, and, this year, the lineup includes a celebration of genre films, cinéma pur and retrospectives — all of which have some element of horror or thriller. Previous years have featured films with more classic horror themes, complete with blood, guts and gore. But, at this year’s festival, the program deviates from its typical grisly lineup. Hugues Barbier, co-founder and artistic director of IF, said in his introduction to the festival’s opening film, “Birds of Passage.”

“It’s always a journey to do a lineup for a festival,” Barbier said. “By February and March this year, we started to realize that there is a couple of trends that are defining this year, which is way less gory movies. … This year is what I like to call a tame year.”

“Birds of Passage” proves IF doesn’t singularly depend on guts and gore to flourish. The film dives more into the thriller realm than it does into horror, exploring the implications of the marijuana trade between the United States and Colombia on the northern Colombian Wayuu clan. Unlike popular narratives surrounding the drug trade — like Netflix’s “Narcos” — “Birds of Passage” considers the significance of the country selling the drugs rather than the one acquiring them, Barbier said.

“It’s a movie that’s very dear to my heart because every time I see a movie that basically deals with drug trafficking and … the impact of drug trafficking, it’s always done by Western countries, and the impact we see is always the impact it has on the country that receives the drug,” Barbier said. “This is a view I’ve never seen before.”

An array of diverse films discover a home at IF. Many features are created by directors outside of the U.S., and the stories themselves twist away from the boundaries of cliché or divisions of conventional narratives. The presence of cultural commentary in “Birds of Passage” exists in other films in the festival’s lineup too, said Rachel Huley ’17, a short–films programmer for IF.

“We do scouting at different film festivals,” Huley said. “It’s kind of shopping around for things and seeing what would work with the festival because the festival is genre–oriented, so we have Fantastic [Fest] films and horror and sci-fi — and anything that seems a little bit abnormal. … Anything that’s more than just your average drama or rom-com … especially if it’s more independent.”

Even though the selection is largely genre-oriented, the films’ individuality shines through their stories and essences. Kevin Fermini ’17, another shorts programmer, said this attention to genre films is not necessarily to the detriment of the festival.

“So, the thing with Ithaca Fantastik is it all revolves around genre, and genre, when you’re talking about film, is, you know, it’s a horror film, it’s a sci-fi film, it’s a fantasy film, crime, whatever — something you can put in a box,” Fermini said. “But the thing is that the genre scene right now is moving in so many directions so quickly, and there are so many new voices getting involved in it that it creates really diverse kind of outcomes.”

The absurdist-meets-horror French film “Au Poste!” — translated to “Keep An Eye Out!” — premiered Oct. 28 at Fantastik. Like “Birds of Passage,” “Au Poste!” reaches beyond the confines of genre, and its addition to the festival displays IF’s dedication to showcasing a variety of features.

The festival also showcases a series of retrospective films, which are selected around a theme, Huley said.

“Our theme this year is kind of about all about generations,” Huley said. “We have ‘The Wildling,’ which is our retrospective, so all of our retrospective films that we’ll be showing this year are going to be about cynical children who are pretty much going on killing sprees.”

Sophomore Alex Kavalec said they plan to attend the festival this weekend because they appreciate the range of films IF offers.

“I love Ithaca, and I love how not only welcoming but how open it is to film and all of its genres,” Kavalec said. “I love going down to Cinemapolis as often as I can. … There’s a German horror film … called ‘Luz’ that was all shot on 16 millimeter that looks really interesting because that’s the kind of thing you don’t see a lot anymore.”

Drunken Cinema — a movie-themed drinking game at Chanticleer Loft on Nov. 2 — will also take place throughout the 10 days of programming. The cinema concert, which took place Oct. 27, brought together groups of local musicians who then chose favorite horror films and created their own original soundtracks to them, Fermini said.

“So, this year, the big thing was the cinema concert,” Fermini said “We had three bands perform original soundtracks to films. We did ‘The House of the Devil,’ ‘Creature from the Black Lagoon’ and then the final act actually threw us a curveball, and instead of doing a movie, they did cataract surgery.”

The festival also curates an art show alongside the movies and short films. “Generations of Submission” opened Oct. 31 at The Studio, and “We Cannot Fully Know” opens Nov. 1 at Angry Mom Records. The shows will include art from Ithaca College students and a virtual reality exhibit by Becky Lane, an IC Affiliate faculty member at the college, Huley said.

Fermini also said the festival will have directors in attendance, specifically A.T. White, the director of “Starfish,” which will premiere Nov. 2. A Q&A with White will follow the showing.

Of all the films, Huley said, she is curious to see “Knife + Heart,” a French film showing Nov. 2. It fits into the confines of horror, but the plot is a perfect example of the range of films IF displays, Huley said.

Fermini said “My Name is Myeshia” is a film he thinks will — and should — stand out to the Ithaca community.

“That’s a really interesting combination of social–justice film that mixes kind of supernatural and experimental elements as well. It played at Boston Underground earlier this year and was a huge hit there, and there was a lot of word-of-mouth about it. That’s one that I think people in Ithaca are really going to like and that we want to kind of get attention towards.”