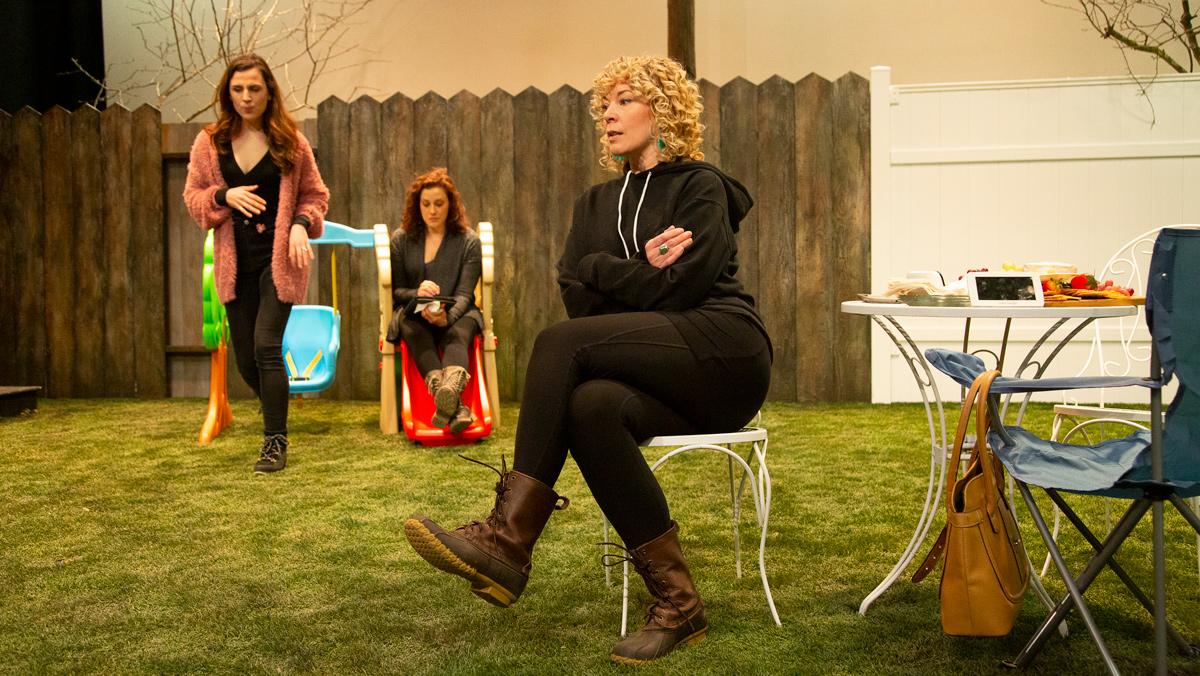 Jill Ruthauser/The Ithacan
From left, Mikaela Izquierdo as Jessie, Melissa Miller as Lina and Erica Steinhagen as Adrienne rehearse for the Kitchen Theatre production "Cry It Out."
By Julia DiGeronimo
Published: February 6, 2020

When the lights go down and the actors step onstage at the Kitchen Theatre Company, the audience knows to prepare itself for a jaw–dropping performance. This is the case in “Cry It Out,” the theater’s fourth show of the season that opened Feb. 2 and will run until Feb. 22.

The theater produces shows that highlight real-life situations on the stage, house manager Melissa Accordino ’16 said. “Cry It Out” focuses on three new mothers and illustrates the hardships they face, like juggling parenthood and work, through a comedic point of view.

Accordino said the theater’s mission is also to produce innovative works and create a welcoming environment for audiences and artists. “Cry It Out” fits this standard, she said.

“I love ‘Cry It Out,’” Accordino said. “It’s one of my favorite shows of the season. It sheds light on [a] female narrative. … It begs a lot of questions that revolve around classism and internalized sexism. … It really makes you sit down and put yourself in an experience that is outside your own.”

“Cry It Out” was written by Molly Smith Metzler and published in 2017. Smith Metzler said she had not seen a play that discussed new motherhood and maternity leave openly and comedically, so she decided to write these themes into “Cry It Out.”

“I feel like this period [of motherhood] is so rife with drama and comedy,” Smith Metzler said. “You’re trying to keep a human alive and not lose your mind. … I couldn’t think of another play that talked about it and put a spotlight on women, so I was inspired to do that myself.”

The theater is one of 13 theaters performing “Cry It Out” in 2020, and the topics “Cry It Out” explores are relevant today, said Lesley Greene, associate producing director at the theater.

“There is a big article in The New York Times … about the very issue covered in the play that is moms or parents juggling work and raising kids,” Greene said. “There is all this talk about choice and having the choice to go back to work, but, in reality, there is very little choice for so many people because the socioeconomic reality is that most people need to go back to work right away. And that is the really big topic of the play.”

The theater offers tickets to students for $20. It also sells student rush tickets in which students can buy seats that have not been sold yet on the day of the performance for $15.

“People get to know the Kitchen Theater when they are students and then keep in touch,” Greene said. “Sometimes Ithaca College faculty will be a designer on a show, and they will bring along a student they are mentoring to be their assistant. Then they graduate and come back.”

“I really do think that IC students would take interest in seeing this show,” she said. “I know firsthand that IC students are incredibly motivated and incredibly driven, and I know that they like to be involved when it comes to the Ithaca community and issues that really matter.”

Additionally, Erica Steinhagen ’99 plays Adrienne, one of the lead roles of of “Cry It Out,” and Tyler Perry ’12 works backstage. As an undergraduate at the college, Perry did design work for the theater, and now he works at the college in the Department of Theatre Arts as well as at the theater as a lighting designer.

“As an Ithaca College student, I was excited to be able to build my resume with professional experience gained at the Kitchen,” Perry said. “Their long-standing tradition of championing compelling, timely and evocative plays helped expand my theatrical palette and experience with different styles of storytelling.”

Steinhagen was a vocal performance major in the School of Music who started her career at the theater in 2004. She has since acted in over 12 shows.

“I really consider the Kitchen one of my artistic homes and a place where I feel I have been able to grow as an artist,” Steignhagen said.

Accordino said the theater has an amazing environment to work in and see shows.

“Seeing shows at the Kitchen are unlike anything I have ever seen in my life, and that’s even before I started working there,” Accordino said. “It’s really a special place.”