Five men and one woman stand in the middle of a room, their eyes looking forward and a multi-page script in their hands. They begin to talk about who they are: a knowledgeable man, a survivor of the Drug War, a strong woman. Next, they share their nightmares: returning to the back alleys and shooting galleries of the past, the absence of family, not succeeding in life. And finally, with an air of hope, they discuss their dreams: to turn their life around in honor of the fallen, to make their families proud, to be all they can be for their families.

This scene is the introduction to the Civic Ensemble production “Dreams and Nightmares: Do What You Always Did, Get What You Always Got.” Before having the opportunity to act in a play, the six performers onstage found themselves in a starkly different environment — behind bars. These six performers — Louis Gershon, Christopher Glenn Hartman, Briana Milton, Anthony Sidle, Abdullah Khalil Bey and Terrell Dickson — were once incarcerated, and after being released, they became involved in the Civic Ensemble’s ReEntry Theatre Program, which provides opportunities to recently released individuals to write and produce theater over a nine-week process. Through workshopping with Civic Ensemble, Gershon, Hartman, Milton, Bey and Sidle wrote original short plays based on their life experiences.

These weeks of rehearsals will culminate in a two-night performance March 25 and 26 at the Hangar Theatre. The six primary participants have been working alongside professional actors and Civic Ensemble members to transform and adapt their personal experiences into a theatrical setting.

This marks the second run of the ReEntry Theatre Program since its inception last year. This year, the Civic Ensemble, Ithaca’s community-based nonprofit theater company, has partnered with the Ultimate ReEntry Opportunity, a project of Ithaca’s Multicultural Resource Center that helps those who are re-entering the community after incarceration to develop networks to aid in this process. No prior theater experience is necessary to join the re-entry program. To choose the participants in the program, those who are interested go through an application and interview process. The people who were chosen this year are Gershon, Hartman, Milton and Sidle, while Bey and Dickson are returning participants from last year.

Interspersed between the short plays are scenes that were also penned by the performers. Civic Ensemble artistic associate Lucy Walker ’13 is the dramaturg for this production. She said the participants were given the freedom to write their plays about any topic. None of the plays are directly about prison, as the writers chose to focus on topics like addiction and minimum wage — factors that may push people into the criminal justice system or may make it difficult to readjust to life postincarceration.

“It’s very in the back of their head because the plays are all about the kind of things that mess people up and get them in prison or hurt people when they get out of prison,” Walker said. 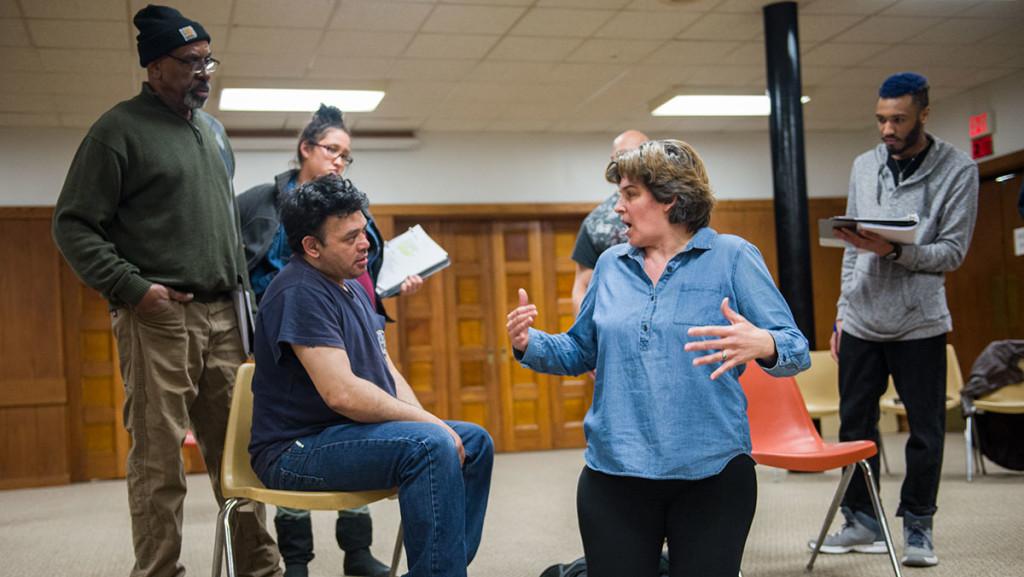 Center, participant Louis Gershon and Civic Ensemble’s Sarah Chalmers rehearse for the company’s upcoming production as part of the Civic Ensemble’s ReEntry Theatre Program. Gershon wrote one of the plays for the show, “Bahrain Blues.”

Mass incarceration is one of the most pressing issues in the United States today, with over 2.3 million incarcerated people in prisons, jails and correctional facilities around the country, making the U.S. the country with the highest amount of its population behind bars, according to The Sentencing Project and the NAACP. With the U.S. holding only 5 percent of the world population, it has 25 percent of the world’s prisoners. Even when people are released back into society, a felony conviction makes it difficult to return to a normal life. For instance, in 48 states, felony disenfranchisement has stripped voting rights away from 5.85 million Americans who were formerly incarcerated.

This is Dickson’s second year participating in the Civic Ensemble’s ReEntry Theatre Program. However, this year, he did not write a play for the production. Because of the time he spent incarcerated, Dickson said he cannot do many of the things he would like to do. 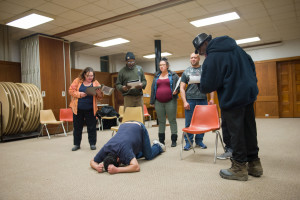 Members of the ReEntry Theatre Program practice a short skit in the play focusing on addiction.
Sam Fuller/The Ithacan

One of the plays, written by Milton, is titled “God Grant Me the Serenity” and focuses on the difficulties of surviving on the minimum wage alone, specifically as a woman and a mother. Set in a grocery store, the three women discuss their financial struggles in depending solely on the minimum wage.

“It’s a struggle to survive in this city or country or whatever just on minimum wage with everything so expensive as a single parent, or even as a family, just to survive,” Milton said.

Although Milton participated in plays when she was younger, she said she still feels nervous about performing. She said working with the Civic Ensemble has given her a good support system in addition to an outlet to open up a bit more.

Similarly, Dickson said the re-entry program also helped in providing a cathartic outlet that allows him to express himself.

“Everybody needs to vent. I have a lot of anger in me because of a lot of things. This right here, it at least allows me a small voice,” he said. “Everyone deserves a chance to be happy, and Civic Ensemble gives me happiness.”

Looking at the system of mass incarceration and the school-to-prison pipeline — the policies and practices that push U.S. children into the juvenile and criminal justice systems — Dickson sees it as more willing to incarcerate than educate. But this is something he would like to change, as he believes there is more worth in educating a person rather than sending them into the prison system. 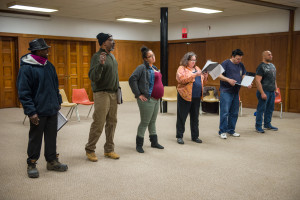 At the end of the production, the same six participants dominate the stage. This time, they are getting rid of their nightmares: greed, job discrimination, ignorance, isolation. With less than a week until opening night, there is a mixture of nervous excitement reverberating around the room. From the various plays throughout the show, Dickson said, he hopes the audience takes away the message that everybody needs help.

“The way the underling or underdog goes, that’s the way everyone goes — work together, help each other, get over addictions or incarceration or lack of employment, then the world is going to be better,” he said. “We got to start planting good seeds and not bad seeds, stop being greedy and stepping on the little people.”