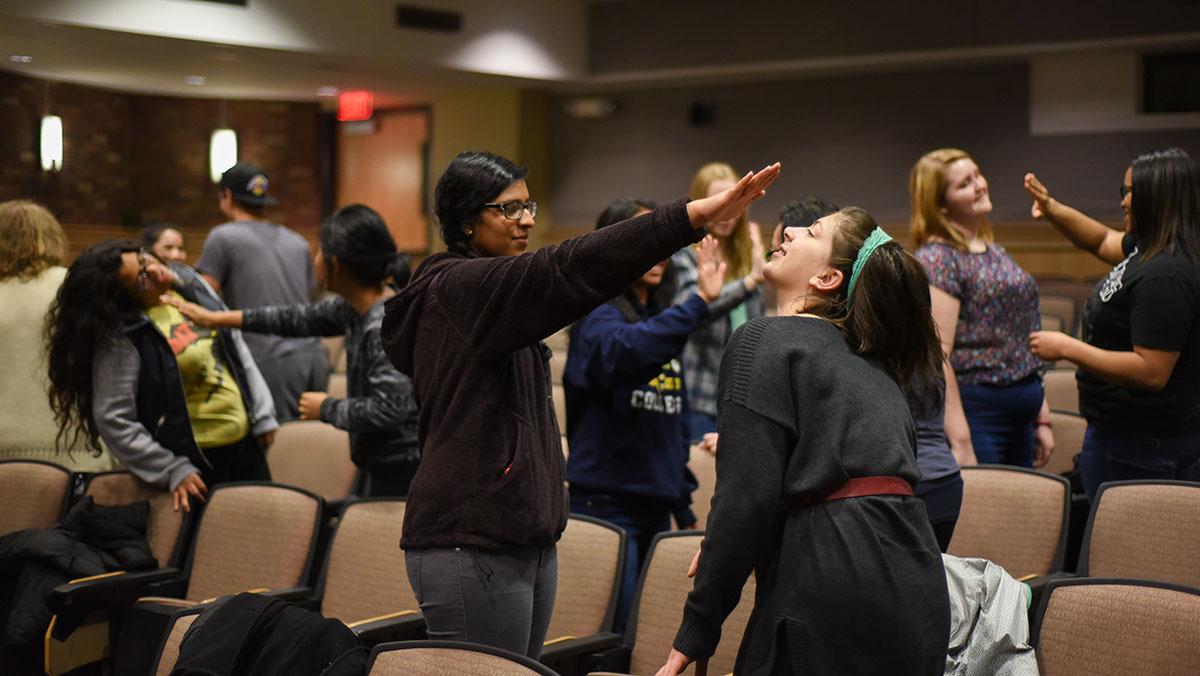 Four students are sitting on a stage, acting out a scene. In it, one student plays a teacher, and three others play students in a classroom setting. They act out a scene where an Asian-American student, played by freshman Michelle Flores, feels her culture is underrepresented and misunderstood, which becomes a source of bullying.

After the skit is over, a student in the audience says aloud, “That was so frustrating.”

Stories like these are not uncommon in reality, and many Asian-Americans face microaggressions in classroom settings and other areas of daily life, said sophomore Candice Tan, co-president of the Asian American Alliance. The idea behind forum theatre, an event held by the AAA on Feb. 29, was to create simulations that forced audience members to confront Asian-American stereotypes in a college setting and provide solutions to combat them.

Forum theatre is a term coined by Augusto Boal, a Brazilian theater director, in his 1979 book, “Theatre of the Oppressed,” and is distinctive from other forms of theater for how it is presented as a way to represent the oppressed and its participatory element, in which audience members have the power to change the outcome of the scene in front of them.

An audience of approximately 20 was presented with two scenarios, but each was repeated several times so different audience members could interact in order to promote positive change. The skits had been previously written and rehearsed by members of the AAA along with freshman Walt Martzen, a theater studies and anthropology double major.

Martzen wanted to discuss Asian-American oppression using forum theatre and went to the AAA to ask them to host it.

“My goal was to talk about microaggression and oppression in an Asian-American context. Personally, I am half Chinese. I was born in America, but I lived in Singapore most of my life,” he said.

Martzen said he wanted to know more about the Asian-American experience but felt like it had been underrepresented.

Tan said Martzen introduced the idea to her after they had been discussing the racial issues on campus last semester.

“Walter and I were talking last semester about a lot of the issues going on around campus. That included a lot of the racial issues international students face and a lot of oppression students face in the classroom space, as well as this campus and many situations outside in their own lives,” Tan said.

Besides offering a space to show an audience what oppression can look like, forum theatre also allows audience members to step in either as a new or existing character to try to find a positive solution to oppression.

“Through forum theatre, not only are people able to rehearse for real–life situations, they are also able to critically reflect on what works and what doesn’t work,” Martzen said.

After one of the skits, freshman Jung ChenKuo reflected on why he felt this event was important. He said scenarios like the ones depicted in Forum Theatre are too prevalent in real life and that he wanted to contribute to the learning experience by participating and showing his attitude toward prejudice.

“We can’t force people to learn if they don’t want to,” Kuo said. “But if there are people that do want to learn, then you begin to educate in the right way. You’re going to be more successful finding those that are willing rather than forcing those that aren’t. This was an eye-opening experience that I will never forget.”

Even though forum theatre can come off as fun sometimes, the real-life issues it depicts can sometimes become serious for the audience, Tan said.

“During rehearsal, I stepped in to do the scenes too, I was almost crying at the end of the scenes because it was so frustrating — I felt so much agony with it,” Tan said. “It was good that today there was a positive ending and lots of positive vibes from everyone. That’s something I really appreciate.”