Grab the play by the ears: Actors face artistic challenges 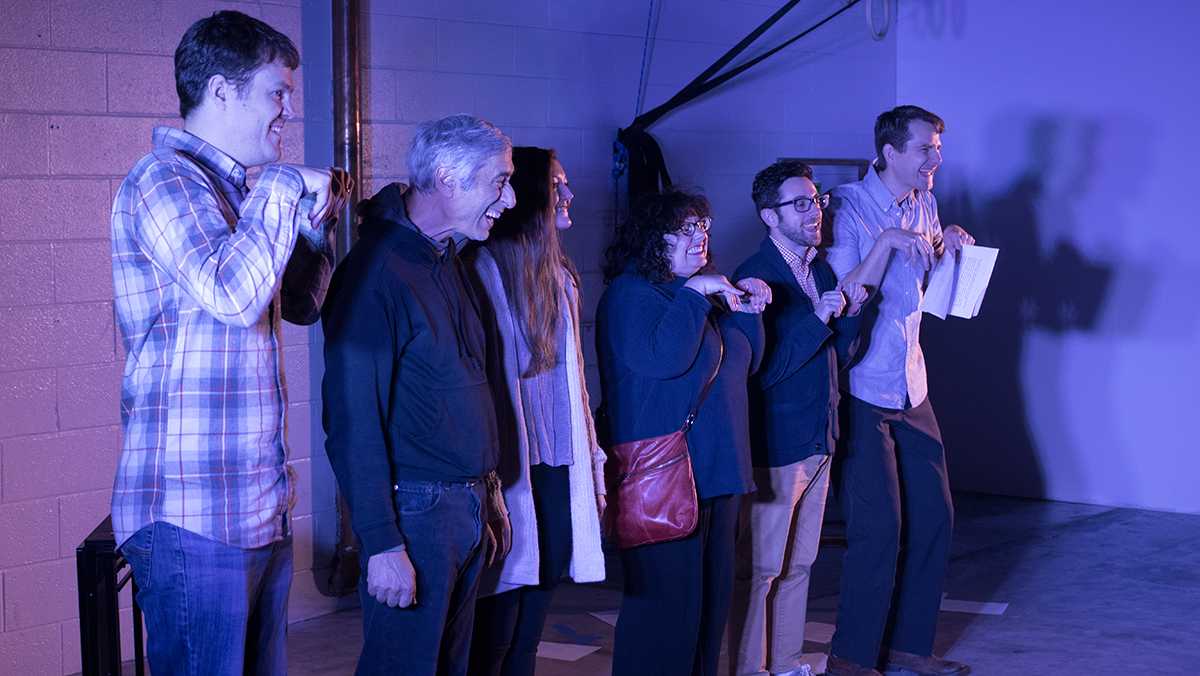 Max Schwarz/The Ithacan
Audience members in The Cherry Arts’ “White Rabbit Red Rabbit” are called up to the stage to interact with the play during the Dec. 4 showing. The play was written by Iranian playwright Nassim Soleimanpour.
By Angela Poffenbaugh — Staff Writer
Published: December 9, 2015

A single actor descends a staircase and walks onto a set that merely consists of a ladder, table, two glasses of water and a vial of poison. The audience applauds, and as the actor steps in front of the crowd, this person is handed an envelope that contains the script for the show, “White Rabbit Red Rabbit.” The audience has no idea what the script says — but neither does the actor because this is their first time seeing it.

The Cherry Arts theater company is putting on seven showings of “White Rabbit Red Rabbit” Dec. 4–12, which involves seven actors, one for each night. Each night, a different actor goes onstage with no set or costume, and the only direction the performer has been given in advance is an email provided by the playwright. The script is then given to them, and they must perform it as a cold read. As the play continues, audience members are pulled onstage to act out the stories the actor narrates.

“White Rabbit Red Rabbit” is a play that was written by 29-year-old Iranian playwright Nassim Soleimanpour in 2010 during his time in Iran. Samuel Buggeln, the artistic director and producer of the production, said the play originated in Iran when Soleimanpour was held back from traveling to Britain for a theater project because he couldn’t get a passport. He was forced to stay in Iran and complete his military service. So instead of traveling physically, he wrote the play so his literary and theater voice could travel all over the world.

Soleimanpour covers the themes of freedom and conformity that he has had to undergo in his lifetime. This interactive play mixes the genres of comedy and drama, and uses several metaphors that compare innocent animal stories to the hardships of having to fulfill his military service to the country.

Several Ithaca College professors are also involved with the play, one of whom is Kathleen Mulligan, associate professor of voice and speech. Mulligan said since there are not many acting opportunities for union actors offered in Ithaca, she was excited to contribute to this play.

“I thought, ‘Well this sounds interesting, and it just sounds like a fun challenge to me,’” Mulligan said. “Sometimes it’s challenging [balancing teaching with professional acting], but it’s nice to be able to do something onstage again.”

Mulligan is scheduled to perform at the 4 p.m. showing Dec. 12.

Erica Steinhagen, the actress who performed Dec. 5, compared the participation of this play to agreeing to participate in “The Actor’s Nightmare,” where the actor has no script, no rehearsal and no preparation. Essentially, the actor is onstage with no idea of what to do, leaving them utterly terrified. However, she said although the idea of performing completely unrehearsed and unprepared is nerve-racking, it also made her feel incredibly excited and giddy. She said the process of preparing involved merely trusting her past experience, the script and the leader.

“Forty-eight hours before the curtain, I got an email with the sparse information that the playwright wants the actors to get,” Steinhagen said. “When I read the bullet point–edged list, I got really giddy because I thought, ‘This is going to be so wild. It’s going to be so fun. It’s going to be such a crazy experience for me and the audience.’”

Steinhagen said the email she received was incredibly vague, giving her very general instructions for when she was to perform.

“He keeps ownership of it [the play]. Here, the voice is the face. He’s talking,” Buggeln said. “It can be very provocative, exciting, unexpected, strange, and it’s a voice that I’m very excited to let speak.”

Buggeln additionally said this play is a good representation of what The Cherry Arts aims to express through their performances. The mission of the company is to explore work that isn’t performed often by professional companies, experimental work and international work that will bring a wide perspective of people from all over the world.

“When I heard of this play, I immediately thought it was a perfect fit because it’s radically local, radically international and formally innovative or experimental,” Buggeln said. “We don’t have a strong sense of what it’s like to live in the Middle East. I think the more we can hear and tell these stories, this is the modest way in which theater can contribute to a more peaceful and understanding world.”

Craig MacDonald ’78 is the fourth of the seven actors and will be performing Dec. 11. He said this change from traditional theater has been exciting because his acting will be much more authentic. He said he is looking forward to the automatic tension he will be sharing with the audience members since neither the audience nor he knows absolutely anything about the play.

‘’The traditional logic of reading a play, auditioning for a play, studying a play, rehearsing a play for over 2 1/2 weeks — it involves an intense amount of similarity,” MacDonald said. “I’m just saying yes to the experience and relinquishing most of the control you normally have in a rehearsed play.”

The play will run until Dec. 12, with a total of seven performances. Tickets can be purchased on www.thecherry.org or at the door for $5, although the suggested donation is $20. The play takes place in Press Bay Alley at 116 W. Green St.