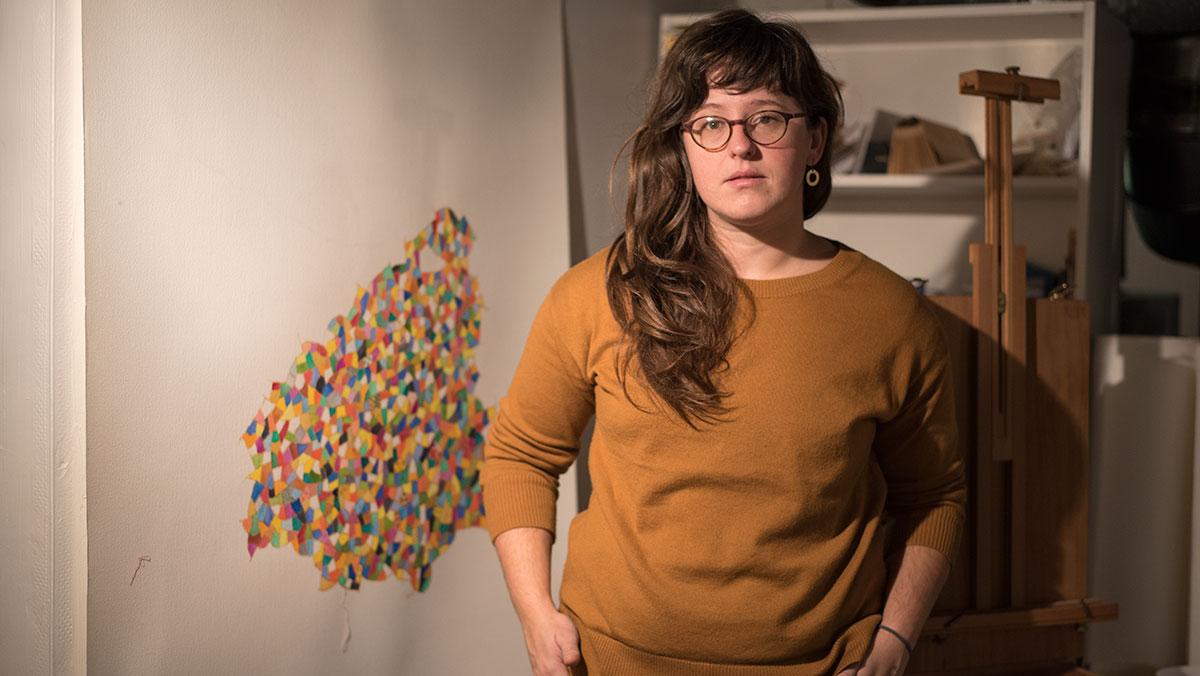 After 11 long days of drawing, Mara Baldwin, the director of the Handwerker Gallery, completed a mural Oct. 18 for the Facebook offices in New York City. Stretching 70 feet long, the highly detailed friendship bracelet mural provides a new look to the office environment.

Staff Writer Sydney O’Shaughnessy spoke with Baldwin about her opportunity at Facebook, her creative process and her other current projects.

Sydney O’Shaughnessy: How did you get the opportunity to draw a mural for the Facebook Headquarters in NYC?

Mara Baldwin: I decided to go to grad school for drawing and textiles, so I did that at the California College of Arts in San Francisco. While I was there, I started doing a lot of drawings. The Facebook commission actually came out of a relationship I built in San Francisco with a gallery owner there. When the owner left and moved to New York, five years later, she has started working as a curator for some of the Facebook offices. Through that relationship, she actually remembered that I had made a drawing in grad school and asked me if I would make a larger iteration of it for this site specifically.

SO: How was this project for you?

MB: This project was an interesting process for me because I was in the middle of a huge office expansion. I, typically, like to work alone. So every day there was a new fleet of people. Sometimes it was furniture people, or construction people, or lighting engineers, or computer engineers or advertisers. It was really interesting to be in a process where I was always being observed while I was working. It was fun and a good challenge. For me, that was the appealing part of the project.

MB: Facebook has a lot of prestige and is actually using the money that they make, which is a lot of money, in a really fantastic way by supporting the careers of artists. What’s interesting about the commission is the way that they are doing it. Usually in an arts economy, artists make things, [but] they don’t get paid for the thing they made until someone buys it. So most of the work artists do, they have no idea if they will ever get paid for it. But Facebook is almost like the CSA of opportunities for an artist because they pay you whether or not they like it. They like your career. While I was working there, I was totally taken care of. I was getting paid to work, which is fantastic, and really different. A lot of artists will not get that.

SO: How was working with Facebook different from work you have done in the past?

MB: It’s a site-specific piece, so I did have to sign a waiver that says when they need to redesign or if they sell the offices, the drawing also will probably be destroyed. I did have a moment, since I work with drawings, on paper, with very fragile and smaller materials, I did have a moment where I said ‘This is very different.’ But what I realized is actually the process of purchase through collectors, museums or other institutions, be it corporate like Facebook or otherwise, that same thing always happens. I could sell a drawing to someone and then their dog barfs on it — there’s really no more control with this than there is with that. The difference here is they saw how long the work actually took. They paid for all the materials and they put me up while I was down there. It’s a different model, but it’s also really fair.

SO: Do you think you will use your experience at Facebook to change things at Ithaca College?

MB: Right now I’m trying to get the gallery and the campus to be compliant with WAGE which is Working Artists in the Greater Economy. WAGE is based in Brooklyn, and they certify institutions, so mostly museums but also college galleries, and they make sure that you are insuring the work appropriately and that you are advertising it fairly. Usually, the artist gets the short end of the straw. I think what I’m trying to do now with the gallery is to make a working model that is fair and appropriate, and by no means normal. Normal is you pay for someone to look at your work and maybe they put it in a show and maybe they don’t, or maybe they put it in a restaurant and don’t insure it and food gets on it and you end up with nothing. Those are the kinds of things I am trying to work against so that we can actually work with students and really be thinking about dreaming of a new arts economy that is ethical, that does think about art as work, not art as hobby.

SO: What are you working on now?

MB: I think it would be interesting if we could work with student groups and visiting artists to start thinking about what the place and footprint of visual arts is on our campus, and rather than investing in large outdoor sculptures, solely, we can start looking at those flat spaces indoors and outdoors. Those places can be repainted and reimagined as an evolving space. It will be an exciting way to make our campus a lot prettier. This would help give students more agency in how the campus looks.