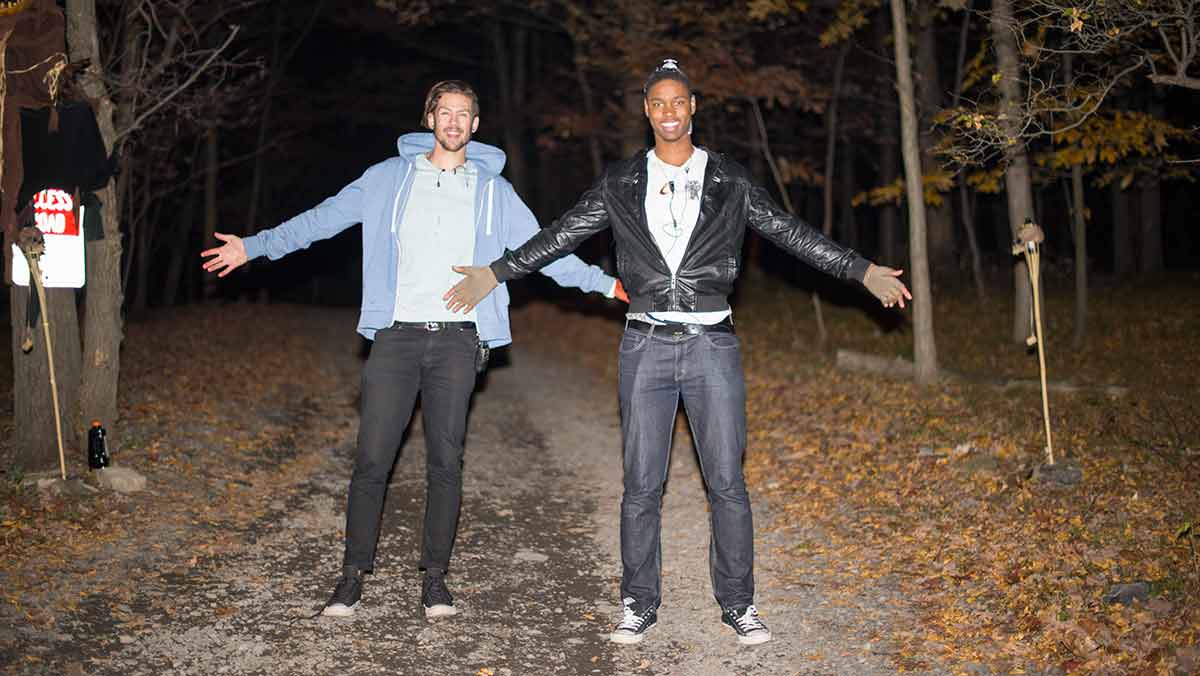 With Halloween fast approaching, things are about to get scary on campus during a five-day, haunted walk in the woods created in part by an Ithaca College student.

The Haunt, a frightening walk to be held in the Ithaca College Natural Lands Oct. 27–31, offers a haunting experience based off Fear Walk, which students can attend any of the five nights. It will be hosted by Fear Walk An Interactive Haunted Experience, a company founded in 2014 by junior Leonard Davis, a business administration major, and his longtime friend Austin Minard, a junior performance and directing major at Fort Lewis College in Durango, Colorado.

There are 733 tickets available for free, and after these tickets are given out, cost of admission will be $10.

Fear Walk is a one-of-a-kind scaring experience, Minard said. Participants camp out in the woods for 12 hours of haunting and scaring that follows a spooky storyline made up by the company. Minard said The Haunt will be a shorter version of a full-blown Fear Walk to give people a glimpse of the business’s full potential, sort of like a teaser trailer to the movie that is Fear Walk.

“It’s not Fear Walk,” Minard said. “That’s not what we’re doing right now. We’re not showing you what Fear Walk is, but the theme of The Haunt is what would have happened if we had built Fear Walk and we were camping up there, so that’s our storyline that I’m basing it off of. You’re going to see a bunch of campers that have been killed, the things that happened to them, things like that.”

Minard developed the concept for Fear Walk after he discovered that there were no haunted houses within reasonable distance of Fort Lewis College, and the ones he took the time to travel to just weren’t scary enough.

“I’m a huge horror fan … I started thinking, ‘What if we put people in the woods and we had them camp for 12 hours?’” Minard said. “And I created this story that worked around you as the participant … A story that has a beginning, middle and end, but you filled in the blanks, so you determined how your haunt went.”

After further exploring this idea of a completely interactive horror experience, Minard contacted Davis in October 2014 and pitched the idea. Davis immediately jumped on board.

“Austin pitched the idea of Fear Walk, and instantly I fell in love with it,” Davis said. “It was an idea that I thought had a ton of room to grow after studying the industry … And we started chasing this dream about a year ago.”

Since then, the company has experienced speedy growth. Two private Fear Walks funded through the company’s Kickstarter campaign have been held in the past year, one in Ithaca and one in Durango. Through working with Ithaca College instructor Brad Treat and the School of Business, the company received funding for this week’s event through the business school’s Business Plan Competition, which gave the company funding after Davis gave pitches and sent invoices to Treat, President Tom Rochon, business school administrators and Christopher Burch ’76, chairman of J. Christopher Capital. The funding allows Fear Walk to open its doors to the public with The Haunt.

For this event, the Fear Walk team recruited student organizations on campus that could help them make The Haunt a success.

“Tons of student organizations have agreed to work with us in this collaboration,” Davis said. “So The Studio will have camera members helping us film this event. IC After Dark will have a Halloween event going on here that then funnels people into The Haunt there, so what we’ve done is create this campuswide collaboration around … this trailer to a Fear Walk.”

Freshman Sarah Cummings, a member of The Studio, said their organization has done plenty of work with Fear Walk for The Haunt, and they are excited to see how it turns out.

“We’re basically focusing a lot of our efforts on the behind–the–scenes stuff,” Cummings said. “[The Studio is] going to be filming a lot of the events for Fear Walk, and we have a social media campaign going on. We’re hoping the students and faculty react well and want to be a part of it. It’s going to be fun. It has a nostalgic feel, while also bringing it up to a level where you’ll actually be scared. It’s going to get people into the spirit of Halloween.”

Minard and Davis said the growth of Fear Walk has involved much hard work, and they can’t wait to see where it goes. They hope to eventually franchise the company so they can bring their haunting experience across the nation.