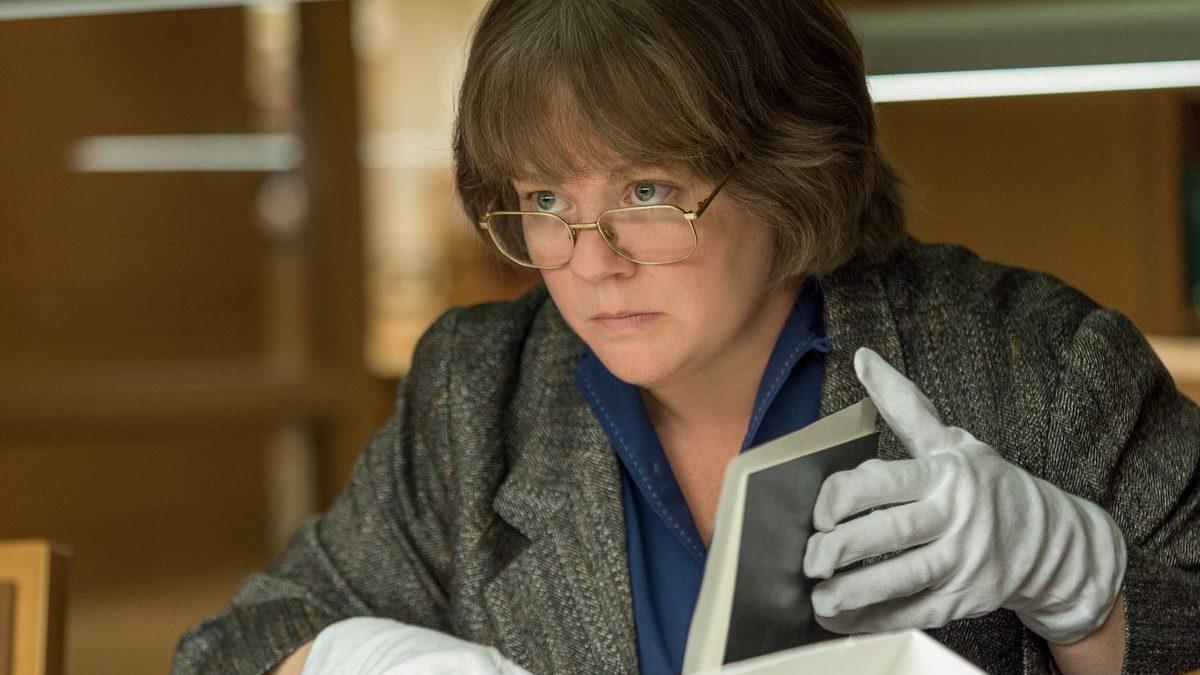 Can You Ever Forgive Me?

“Can You Ever Forgive Me?” is a heist film, but don’t expect any bombs or car chases.

After some mild success writing celebrity biographies, author Lee Israel (Melissa McCarthy) finds herself in a rut. She has lost her day job, her agent won’t take her calls and she has no money to pay her sick cat’s medical bills. So, using her linguistic expertise and signature snark, Lee begins forging sensational letters from famous writers.

The film, directed by Marielle Heller, is based on real-life author Lee Israel’s autobiography of the same name, which recounts her career as a forgery artist in the 1990s.

Heller crafts a dark, delicate — and, at times, depressing — portrait of fraud. The film could have easily been confined to the dreariness of its subject, but the sentimentality Heller brings to the story and its main character make it warm and complex. In the vein of other biopics centered on morally ambiguous figures, like “I, Tonya,” Lee’s rudeness and crimes aren’t underplayed. Despite the film’s title, Lee isn’t looking for forgiveness but rather empathy. The result is a compelling and multi-dimensional point of view wherein viewers can recognize Lee’s immoral behavior and still root for her happy ending.

McCarthy’s well-known comedic flair is backgrounded here, but Lee’s sarcastic humor and snarky dialogue allow it to shine through occasionally. Lee’s loneliness and insecurity are sharp contrasts from McCarthy’s previous roles as the aggressively confident Megan in “Bridesmaids” or charismatic Susan in “Spy,” but she embodies them with grace and intellect. The film’s primary source of energy is Lee’s only friend Jack Hock (Richard E. Grant), an eccentric and charming drug dealer who helps her sell her forged letters. Thanks both to the screenplay’s wit and McCarthy and Grant’s chemistry, Lee and Jack’s cynical conversations are delightfully dismal. Moments when the pair drink, scheme and complain about the world together are sweet while still staying true to the tone.

The film itself is defined by an endearing subtly and softness. No moments feel overly dramatized, and no events or scenes are too grandiose. A conversation between Lee and one of her buyers, Anna (Dolly Wells), is told entirely through subtext and facial expressions. This understatement extends to Lee and Jack’s sexual identities. Lee and Jack are both explicitly gay, but their sexualities don’t define either of their characters or stories, instead existing as another quality that contributes to their complexities. As a result, Heller avoids the exploitative feeling that accompanies many films that use character identities as all-defining plot devices.

A somber, pale and almost sepia aesthetic cloaks the film, crafting a refreshingly lonely New York City populated by dusty bookstores and stuffy bars instead of the oversaturated modern scenes viewers often see in other films. Even the jazzy and mellow soundtrack, at times, feels too energetic for the world Lee lives in. Telling this crime story without flash allows viewers to develop a deeper, more resonate connection to its characters, making it both entertaining and emotionally impactful.

This subtly also creates a slow and suspenseful pace that requires patience from its audience. Heller builds up the stakes of Lee’s crimes and her dread of being caught at an almost painful leisure. So, by the time history takes its course, the moment viewers expected all along still manages to be thrilling. This pace works in the end, but at the expense of the film’s first act, which drags with a melancholy series of failures.

Woven in among the film’s more explicit themes of criminality and secrets is Lee’s underlying struggle with writing — more specifically, writing her own stories. Lee’s pride prevents her from acknowledging that she hides behind her biographies and forgeries due to insecurity. Lee’s fear and frustration of writing about herself speaks to an age-old question rarely discussed in films about writers: Why should anyone care? Lee finding her voice, like the film as a whole, happens slowly and quietly and becomes more overshadowed by the stakes and mechanics of her crimes than most main character arcs usually are. However, as a result, Lee’s eventual confidence comes as a heartwarming surprise.

In the beginning of “Can You Ever Forgive Me?” Lee asks her manager Marjorie (Jane Curtin) why her books don’t sell at the rate that famous author Tom Clancy’s do, and Marjorie tells her it’s because her name doesn’t mean anything. And Although Lee’s journey to fame via fraud is bleak, suspenseful and tragic, the sincerity with which Heller treats her story allows Lee’s name to be defined by more than just her mistakes.