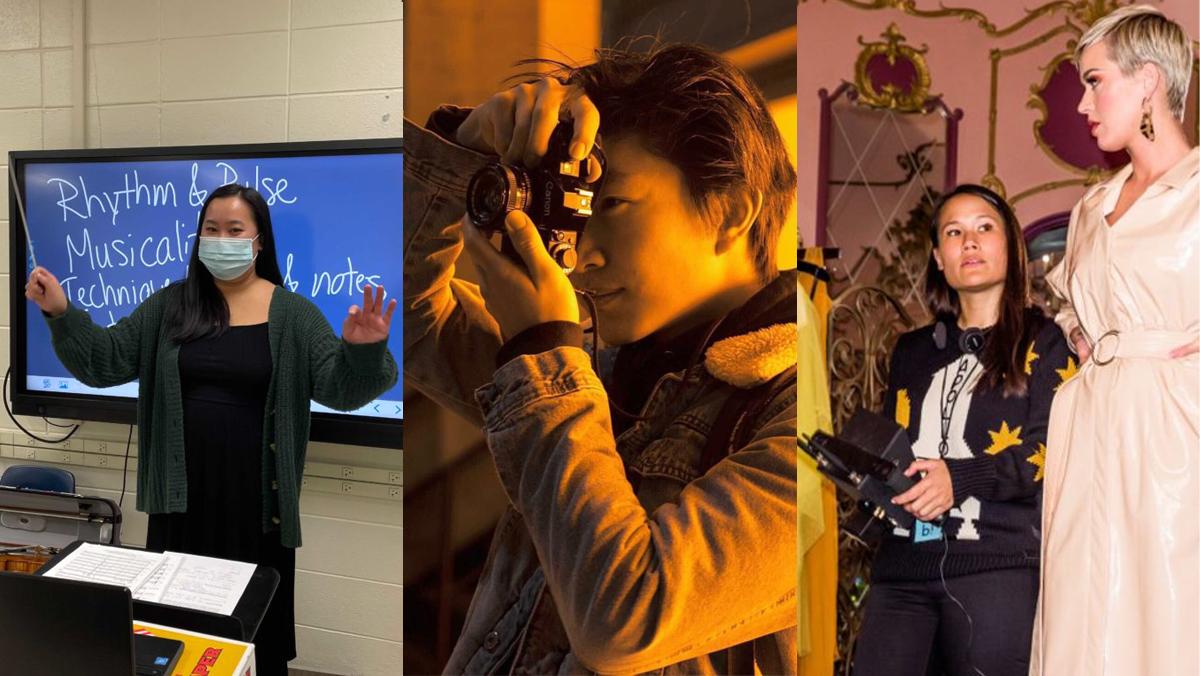 As a part of Asian American and Pacific Islander (AAPI) Heritage Month, which takes place in May, The Ithacan spoke with four AAPI alumni and a current student who work in the arts and communications fields.

Their expertise ranges from television, film, music and communications. All of the individuals discussed the different parts of their fields that left a lasting impact on them.

Larry Teng ’99, Aya Tanimura ’03, Kat Walsh ’19, Katelyn Tai ’20 and senior Justin Li all shared similar experiences of having their identities play a larger part in their profession than they once thought.

Representation matters on all levels in art and communications because it is important for all people to know they have an outlet for their voice. 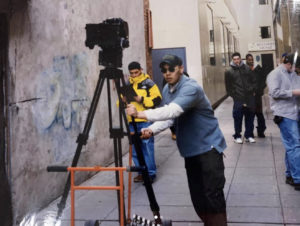 Larry Teng works on a set during his time as a student at Ithaca College. Courtesy of Larry Teng

Larry Teng ’99 has worked as a director and a coordinating producer on shows like “Nancy Drew,” “The Walking Dead,” “Doom Patrol” and “Hawaii Five-0.” At the beginning of his career, Teng said he used to conform to his white peers.

“Even professionally when it came to work, I always tried to get past my Chinese ethnicity as much as possible,” Teng said. “Whether it was self-deprecating humor … I would always try to go out of my way to be like, ‘Hey, I’m not Chinese, I’m American, and I speak proper English like you’ to a fault.”

Teng said later in his career, he realized the importance of incorporating his identity into his work. While working on “Hawaii Five-0,” Teng said he had an experience with a showrunner that helped him understand the power of representation. Teng said the show runner was especially kind to him, and when he asked him why, he was surprised by the answer.

“He said, ‘You understand how important it is that somebody who looks like you sits in this chair that says, ‘director,’’” Teng said. “It really struck me because they didn’t have any role models. They were all taught to believe that maybe the best they could do are these positions — not producing, not directing, not writing. And that’s when it kind of clicked. I was like, ‘I need to do something with this.’”

Aya Tanimura ’03 has worked with many forms of media throughout her career, including television, music videos for stars like Katy Perry and commercials for companies like The Coca-Cola Company. Tanimura said being a woman of color has made it more difficult to progress in her career.

“I still feel like I’m super early in my career, even though it’s taken this long to get where I am,” Tanimura said. “And I think part of that challenge is being a woman, and being a person of color. I think it would have been very different if it was a rich white dude coming into the business.”

Tanimura said she prioritizes representation in her work, since she believes it has a large impact on how minorities are viewed by themselves and others.

“I think when there’s a lack of representation and you don’t see yourself in the media, you either consciously or subconsciously begin to think you don’t matter, or that your opinions don’t matter or that you just don’t count,” Tanimura said. “And one of the things that has always been really important to me, even in college was really important to me, though very hard to cast non white people in Ithaca especially when I was there, is to make sure that there’s always a broad spectrum of people represented in my work, which I’m really proud of, because if you look at my reel, it really is like a rainbow.”

Senior Justin Li said he is currently editing his thesis film he shot last semester in Hong Kong during his gap semester. Li said the film is inspired by the idea of strangers who see one another every day but do not know each other as people.

“I just got the idea, what if [two strangers] smoke in the same alleyway, but as one leaves, one gets in, so they keep missing each other, and they also see each other on the train a lot,” Li said. “So the first 10 minutes is their routine. It goes through when they’re commuting or taking a smoke break. They walk past each other, and then when they both happen to be in an alley at the same time and they forget lighters and that sparks the encounter.”

Li said he will be screening the film in his class May 8, but hopes to have it released to the public in May or June. Li said this is the first film he has created with an all-Asian cast. He said that before the recent rise in anti-Asian hate, he did not usually think about his identity.

“All my classes I’m the only Asian kid in them, but it never really bothered me because my high school was pretty much white dominant,” Li said “So I kind of got used to it. It didn’t really stand out to me until the recent anti-Asian stuff, and then I started reading it, thinking about it.”

Li said he thinks the way Asians are portrayed in the media is beginning change for the better by straying away from stereotypes.

“When I was growing up on YouTube or TV shows, the Asian was usually the nerd,” Li said. “But recently, with the rise of K-pop and all this media, a lot of Asians look really cool. So I feel like the media needs to balance it. Obviously there are nerdy white people, nerdy Black people, but when I was growing up there were way more nerdy Asian people than cool people, so I feel like the media has a responsibility to balance that.”

Katelyn Tai ’20 teaches orchestra at Mahopac Middle School in Putnam County, NY. Tai began her teaching career while still at the college doing junior and senior student teaching. She knew she wanted to work with young students in the music realm.

“Music can be something that is often set aside as a privilege in school, when it’s really part of core curriculum,” Tai said. “Every student should have the opportunity to learn music.”

Tai said music education is often not prioritized and is seen more as an extracurricular. Tai emphasized the importance of school systems supporting students who wish  to pursue music, especially because of the costliness of instruments and extra lessons that could affect certain families and their situations.

“I think it’s really important that public schools and schools everywhere are supporting students with financial need and students of color who are interested in music and supporting their passions through that,” Tai said.

Tai believes that music is something that should be for everyone, even at times when it feels like it isn’t. Historically, classical music has been dominated by white men.

“The arts feel exclusive to people of color, especially in the classical sense,” Tai said.

She said working within the arts to inspire the next generation of musicians is something she takes pride in. 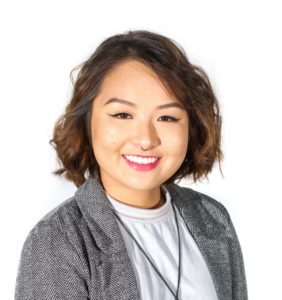 Kat Walsh ’19 graduated with a Bachelor of Fine Arts in film, photography, and visual arts. Walsh said they attended a

performing arts high school where they focused on theatre performance. However, when they were 15, Walsh’s preference quickly changed to work more on the behind-the-scenes aspects.

“When I was 15, my musical theater teacher told me I would never be successful because I was Asian,” Walsh said. “I remember that had a really big impact on me. I don’t think that’s why …  the main reason why I stopped pursuing acting and onstage spotlight careers, but it definitely had an impact, and it affected me a lot more than I thought I did at the time.”

Walsh said that when they made the decision to work behind the scenes, they also chose to focus more on social justice issues to bring their passion out in a new way. This led to their part in the creation and execution of the community outreach manager position at The Ithacan.

Walsh said they continued on from being the community outreach manager of The Ithacan to being the Community Engagement Fellow of New York Women in Film & Television (NYWIFT) and the social media manager for Black Public Media, two inclusive groups that prioritized the importance of having a diverse staff.

“We are just two groups of people who have a common interest, and we can both use our backgrounds, and our histories and our knowledge to amplify what we’re doing,” Walsh said. “We are an asset, and it is not because of the color of your skin, it’s because of what you bring to the table.”