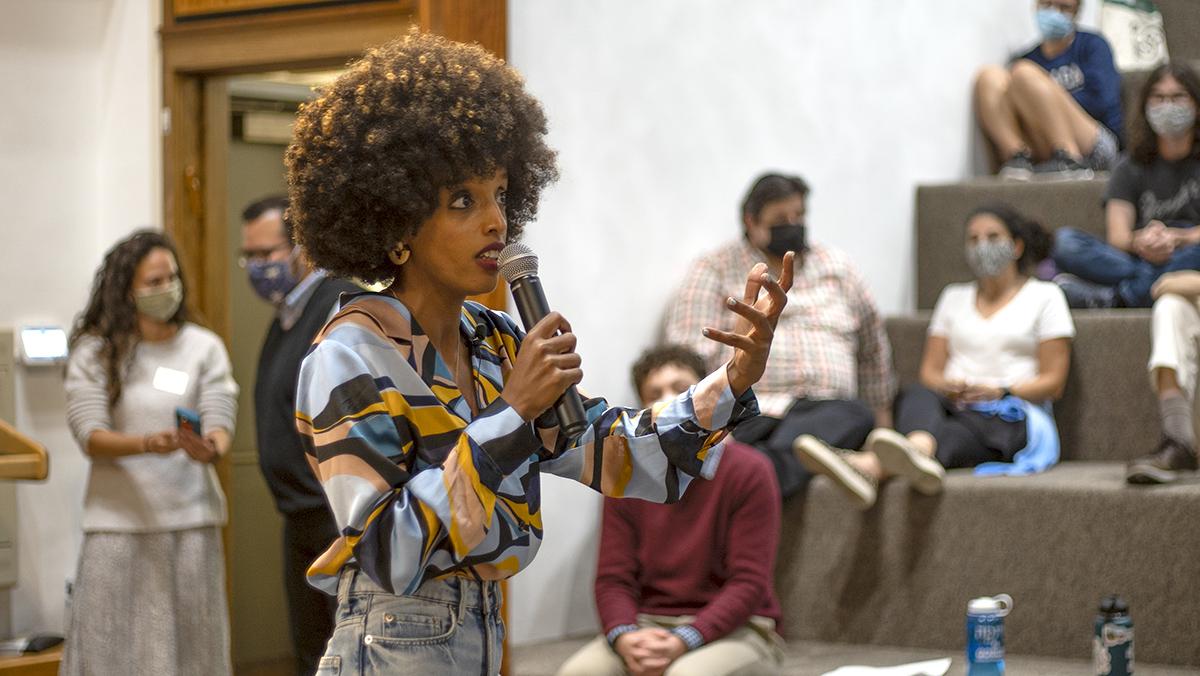 On Oct. 12, Ashager Araro, an Israeli-Ethiopian activist and social media influencer, began her tour across American college campuses at the Muller Chapel at Ithaca College. Araro advocates for Jewish Ethiopians, who she says have historically been excluded from discussions of Jewish history.

The event was the first in the Homburger Jacobs Contemporary Jewish Issues Lecture Series, which is being hosted by the Office of Religious and Spiritual Life. The new series aims to address the recent rise in antisemitism across America and Europe by educating the campus community. The series is funded by Eve Homberger ’77, Bradley Jacobs and Marc Homberger, who named the series in honor of their parents and grandparents. Araro’s visit was the first on a multi-college tour she will be doing across college campuses in the United States.

Araro discussed the history of Jewish Ethiopians who have lived in the region for over 2,000 years and have faced religious repression and forced conversion. Araro explained this in the context of her life and her family, who live in Ethiopia. Araro said her identities of being both Black and Jewish has put her at a crossroads where she faces both anti-Black racism as well as antisemitism.

“If you’re gonna remember one thing from this lecture, it’s the fact that a lot of times when people look at me and see my identities, they ask me to choose — Jewish or Black,” Araro said. “I refuse to choose. My parents live in a majority Black country. They look like any other Ethiopian. But their Black skin didn’t protect them from antisemitism. For me, as a Jew living in Israel, a majority Jewish country, my Jewish identity doesn’t protect me from racism.”

Araro has over 36,000 followers on Instagram and over 24,000 on Twitter. Araro said that during the pandemic, her presence on social media increased significantly, as she continued her advocacy virtually. Her online advocacy includes posts about the history of Judaism in Ethiopia and her experience with both anti-semitism and anti-Black racism.

Max Kasler, the springboard innovation fellow for Hillel at Ithaca College, said before Hillel made a plan to bring Araro to the college campus, he followed her on Instagram. Kasler said the organizers knew they wanted to bring a speaker to campus to discuss Israel, so they talked to Hillel International — the world’s largest Jewish campus organization. Eventually, Hillel International decided to organize a campus tour for Araro.

“I’ve learned about the Ethiopian Jewish community before,” Kasler said. “I lived in Israel for a year and so I got to experience it a little bit while I was there because I did learn about the Ethiopian Jewish community while I lived in Israel. But to hear another like this story is just so powerful. She is an extremely articulate person and she told her story extremely well. She gives me a lot of hope for the future.”

Sophomore Noah Kamens, engagement intern for Hillel at Ithaca College, said for this event the goal was to get as many people to come as possible, regardless of religious affiliation. He said he was pleased by the amount of people that came and it was incredible to hear from someone who had these experiences first–hand and is involved in the Jewish community.

Junior Justin Foster said he attended the event for his religious studies class and said he appreciated the experience. He said it was his first time going to an event hosted by the college’s Office of Religious and Spiritual Life.

“I like that I heard about Zionism from someone that wasn’t just on social media posting an infographic and that I learned from someone who lived the experience,” Foster said.

In her lectures and in her online advocacy, Araro has said the concept of Zionism — the idea that a Jewish nation-state should be re-established in Israel — is often misinterpreted. Araro, who served in the Israeli special forces, said she is always open to hearing other peoples’ stories and believes that the Israel-Palestine conflict is a more complicated situation than the way it is depicted.

Eliel Safran, vice president of Religious Life for Hillel, said she has been looking forward to hearing Araro’s presentation for a while.

As Araro begins her tour, her social media presence is still increasing. Araro said she is excited for the future, but is unsure of where it will lead her.

“I don’t know what the future holds for me,” Araro said. “I wish that my page will be a source of knowledge for people to learn more about the Jewish community, about Israel and putting nuance into issues [and] rather than talking over people, talking to people.”