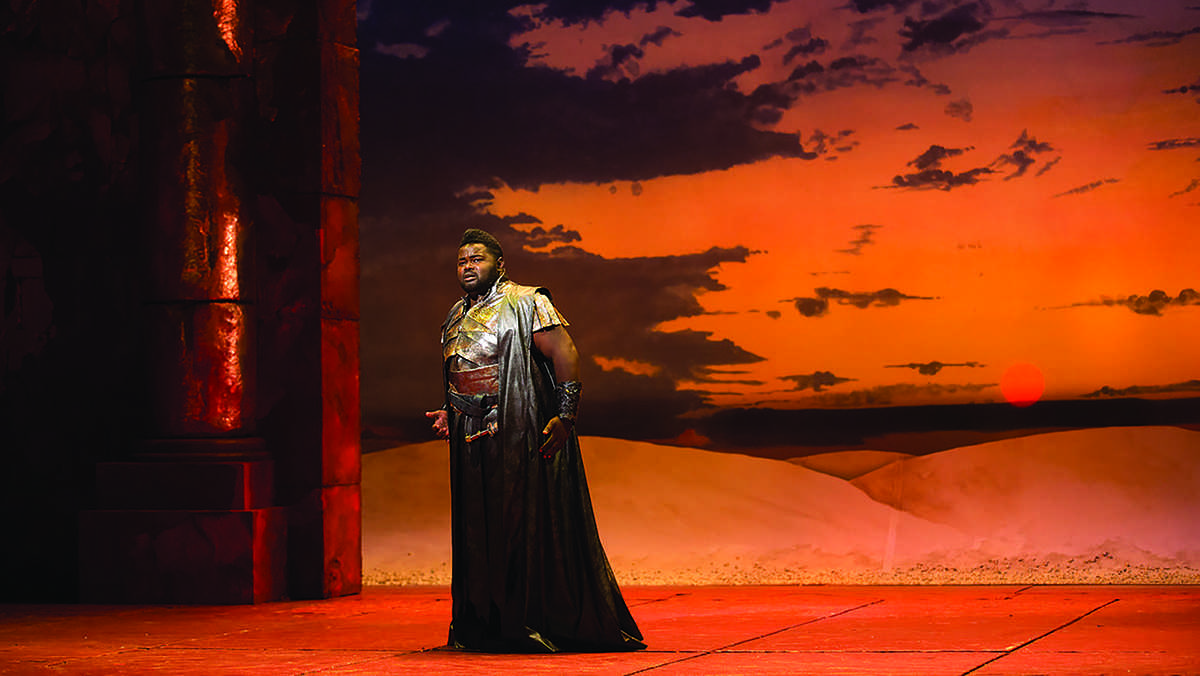 Glimmerglass, a renowned festival held annually in the Finger Lakes district of New York, regularly presents relatively unknown operas, such as the American premiere of Vivaldi’s opera, “Cato in Utica,” this past summer. John T. Holiday Jr., assistant professor in the School of Music and countertenor, was named one of the “stars of tomorrow” in the Washington Post’s “2015: The year in classical music” for his “remarkably mellifluous Caesar” in the production. The recognition from the Post left Holiday “excited and very humbled.”

“That nod … means that they understand my artistry,” Holiday said. “They get me. I’m thankful for each of the audience members who took time out of their schedules to come see this remarkable show.”

In a review of the play from The New York Times, classical music critic James R. Oestreich said, “As Caesar, Mr. Holiday, a robust and brilliant countertenor, had similar animated opportunities and made the most of them.” The website Opera Warhorses called Holiday “a rising star in the baroque repertory” and “the recipient of thunderous ovations.”

Holiday studied at top schools, earning his Bachelor of Music from Southern Methodist University Meadows School of the Arts, his Master of Music from the University of Cincinnati College-Conservatory of Music, and an Artist Diploma in Opera Studies from the Juilliard School. His resume includes appearances throughout the U.S. and internationally, premieres of new works, credits on six albums, and numerous awards and honors.

Holiday said he has been singing since he was 2 years old. His grandmother was the minister of music at Calvary Way Missionary Baptist Church. He said it was there, singing as the only child in the adult chorus, that he began to believe he was talented.

He fondly recalls singing duets in church with his older sister, Javon, with his grandmother playing the piano as one of his most memorable musical experiences. In third grade, he auditioned for The Fort Bend Boys Choir of Texas and entered the world of classical singing.

“Even though the hallmark baroque and classical composers had absolutely no idea that there would be a little African-American boy named John Holiday, so much of their music speaks to my soul,” Holiday said.

It was in a 1997 production of Hector Berlioz’s “La damnation de Faust” where Holiday said he was caught by the “opera singing bug.” Hearing the fiercely talented mezzo-soprano Denyce Graves sing the role of Marguerite was a game changer for him.

“I remember saying in my 12-year-old head, the instant I saw and heard her sing, that I wanted to sing like that,” Holiday said. “Until I saw her, I didn’t know that it was a possibility for African-Americans to sing in opera.”

Holiday said as a sophomore at Southern Methodist University, his best friend, Neeki Bey, encouraged him to give jazz a try. He began sitting in on songs and was exposed to talented jazz musicians at the Balcony Club in Dallas and has since perfected his own distinct style of jazz.

Coming from a family of teachers as well as musicians, teaching has been a huge part of Holiday’s life. He taught choral music and voice to junior high and high school students between his undergraduate and graduate studies and has always maintained a private voice studio between his singing engagements. He has always wanted to teach at the collegiate level and said he “jumped to become a member of Ithaca’s phenomenal faculty.”

Faculty members in the School of Music are likewise thrilled to have him on the staff, including Janet Galvan, performance studies professor and director of choral activities.

“Holiday’s voice is beautiful, powerful, agile and seamless top to bottom. He sings with such a deep commitment to the music and the text that the audience is completely drawn into the atmosphere he creates with his performance,” she said. “He is a wonderful and supportive colleague, and I love having him here.”

Like most singers, Holiday said he found the close interactions with each of his own professors to be immensely beneficial.

“It is my belief that a professor’s job is to identify talent and to create a conduit through which the singer is able to know that he/she is being encouraged, nurtured, refined and prepared for the world’s stages,” he said.

Another member of his studio, Ryan Mewhorter, a freshman vocal performance major, said Holiday makes sure to point out the potential in every little thing.

“Even when you make a mistake, he makes you feel like you got something out of it and that it’s the first step to achieving the greatness that you want,” Mewhorter said.

Holiday said he emphasizes the importance of the journey an individual in the arts experiences and that every artist endures plenty of “no’s” when they’re starting out.

“Take that ‘no’ as ammunition and fuel to get better. Eventually, the right ‘yes’ will come,” he said. “Every week, I call my Bigmama [his grandmother] to talk to her, and she always gives me encouragement by saying this: ‘Nothing beats a failure but a try, so keep on trying, and always do your best — not for others, but for yourself, John.’”